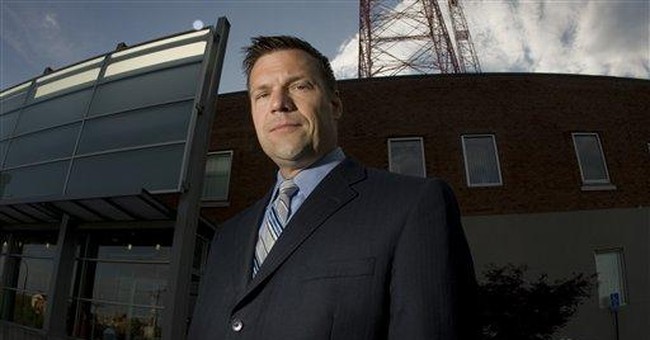 Kansas Secretary of State Kris Kobach is calling for a criminal investigation after a huge mob of illegal alien supporters surrounded his private home Saturday and held a rally on his front porch.

At least 200 members of Sunflower Community Action were bussed into Kobach’s Kansas City-area neighborhood on Saturday – to protest his staunch anti-illegal alien views.

“I was just appalled,” Kobach told Fox News. “They have a right to protest at my office or at public places – that’s fine. But they don’t have a right to enter someone’s private property and engage in this kind of intimidation.”

“I have four little girls and they would have been terrified to see 200 protesters shouting at their daddy on megaphones on the front lawn,” he said.

The secretary of state said a large number of the protesters were believed to be illegal aliens. They can be seen on video chanting in Spanish, standing on Kobach’s porch, front yard and driveway and demanding that he come outside.

“Kris Kobach, come on out,” one unidentified protester shouted. “We’ll show you what Kansans are all about.”

Kobach and his family happened to be out-of-town when the demonstrators arrived. Video showed the protesters arriving in four buses – and then marching through the neighborhood. They left behind 20 pairs of shoes at his doorstep – representing illegals who’ve been deported.

Kobach has built a national profile presenting tough policies on illegal immigration issues. He and his family apparently weren’t home during the protest at his home.

“You don’t go to a public official’s home and try to intimidate him because of the positions he’s taken,” he said.

A receptionist at Sunflower Community Action told Fox News they would be releasing a statement to the press later today.

Kobach said he was especially troubled to learn that it took police at least 15 minutes to respond to his house.

“You have a mob of 200 people gathering on someone’s property and it takes the police 15 minutes to get there,” he said. “That doesn’t give you a whole lot of confidence either. I shudder to think what would have happened if one of those members of the mob had tried to break into the house.”

He also feared what would have happened had he been home with his wife and four young daughters.

“On a typical Saturday, my four girls would have been riding their bikes and coloring chalk in the driveway,” he said. “That’s where they play. If four buses pulled up and the mob started marching down upon them, they would have been absolutely terrified.”

The secretary of state is a staunch supporter of the Second Amendment – and he said the incident at his home is an example of why Americans should bear arms.

“If we had been in the home and not been armed, I would have felt very afraid – because it took the police 15 minutes to show up,” he said. “It’s important we recognize there’s a reason we have the Second Amendment. There are situations like this where you have a mob and you do need to be able to protect yourself.”

He said had they been home and the mob had gotten out of hand, his family would have been in “grave jeopardy.”

“The Second Amendment is the private property owner’s last resort,” he said.

Kobach said he’s asked local police and the county attorney to investigate the incident. He believes a number of laws were violated including terrorizing a public official.

The county attorney did not return calls seeking comment.

Kobach said he will not be silenced by the weekend mob-action.

“My views are set and I’m determined to do what I can to restore the rule of law,” he said. “Let’s obey our laws and not give amnesty to illegal aliens.”

And he also leveled a warning to would-be protesters.

“Don’t come to my home and don’t scare my family,” he said.