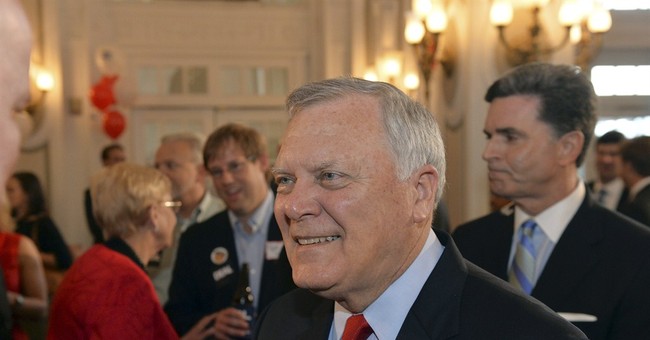 “There were discussions we had 2-3 weeks out from the election, when the possibility of a runoff still existed. Chris Riley [the Governor's closest advisor] kept telling us, ‘I'm not telling the Governor we're in a runoff because I don't think we're going to be. I'm going to make the necessary decisions based on your poll to ensure we won’t be in a runoff.’” said John McLaughlin, who polled for Nathan Deal’s successful gubernatorial campaigns in 2010 and 2014.

While many predicted a runoff in Georgia's Senate race and Gubernatorial contest, neither went into overtime.

The story after the election in Atlanta’s largest newspaper was that every public pollster – including the paper's “Gold Standard” poll was wrong.

By the time the Deal campaign and McLaughlin stopped polling, around October 23, both the pollster and the campaign were confident that Deal would win reelection without a runoff.

I spoke to Deal pollster John McLaughlin about how they predicted the results of the race more than a week out, while most public pollsters were panned as having been wrong.

While the media fixated on the “horse race” numbers, McLaughlin looked deeper into the crosstabs and formulated predictions based on a more sophisticated model of the electorate. McLaughlin explained how they arrived at their prediction:

“One of the first thing I look for in a campaign poll is crosstabs of the undecideds – how undecided voters are breaking.”

“In our last survey, a week before the election and following a period of weekly four-days-a-week tracking, our sample was 64% white 29% African-American. Fifty-one percent of undecided voters were white and 41% were African-American, and Governor Deal was still below 50%” said McLaughlin.

“But, among whites who had decided, Governor Deal received 71% and he was getting 10 percent among African-Americans. When we factored in those ratios to the undecided voters, we came to a 52-44 prediction.”

Brian Robinson of the Deal campaign told me:

“We knew a few of those undecideds would come our way and we'd end up at 52 or 53 percent. We were able to tell media early on Election Day the exact margin of victory before the polls closed. They looked at me as if I'd lost my mind or was in denial. Jason Carter's people honestly believed that Deal winning on Election Day was the 'least likely outcome.' Because of John McLaughlin, we knew it was the most likely outcome. We had complete confidence in the numbers he was giving because, with us, he'd always been right."

The final results were 52.8 percent for Nathan Deal and 44.8 percent for Jason Carter, so McLaughlin's prediction, one week out, of 52-44 was right on the money.

During the active phase of the campaign, McLaughlin was polling more frequently and more deeply than media pollsters.

“We're asking many more questions than you see in media polls – well beyond who's winning and demographics, we're asking what ads they're seeing, what issues are important. We're looking at the level of polarization in the electorate, and over time, as the undecided numbers dwindle, how the undecideds are breaking for one candidate or another, as well as what the early voters are doing,” said McLaughlin.

“Heading into the last weekend, we're done polling about a week out. That's an eternity in political time. Ninety percent of voters are on the internet and seventy percent are on Facebook. You can do things on the internet at the last minute, on Election Day, that will affect the results. Results can change after a poll and it's up to the campaign to drive home the message and get the voters to the polls,” said McLaughlin.

“We knew going into the weekend before the election that if undecideds continued to break the way they had been, Deal had an eight-point lead and was in without a runoff. The Deal campaign and the Georgia Republican Party ran strong that weekend and up to election day and were able to make those predictions into election results,” said McLaughlin.

Two clear differences emerge between the public polling in Georgia's gubernatorial race and internal polling by McLaughlin for the Deal campaign. First, the public polls stuck strictly to looking at the topline “horse race” numbers and attempting to impose a narrative on them, while the campaign's pollster looked more deeply at the electorate, delving into crosstabs and emerging patterns to find a path to victory. Second, by applying what he learned about how voters were deciding to vote and how early voters were breaking, McLaughlin could predict what the remaining undecided voters would do on election day.

One week before the election, the Deal campaign's pollster still had the Governor under 50 percent, but accurately predicted the results. Media predictions that focused on Deal remaining under 50 percent failed to differentiate between a poll showing the state of the electorate on the day it was fielded, and predictions of an election still some days out.