Many Guatemalans Aren't Seeking Asylum in US Over Violence, Political Persecution. They Want Giant Homes.

Todd Bensman
|
Posted: Mar 03, 2020 12:01 AM
Share   Tweet
The opinions expressed by columnists are their own and do not necessarily represent the views of Townhall.com. 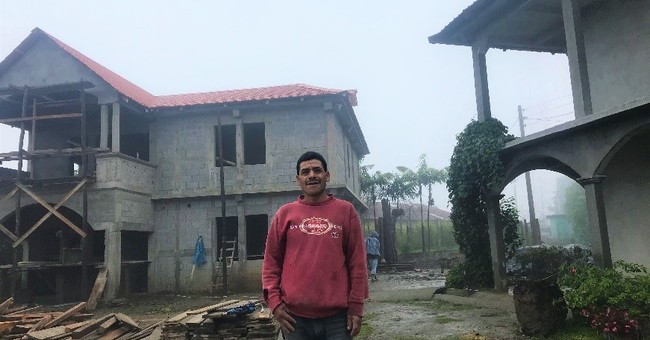 YALAMBOJOCH, Guatemala – A federal lawsuit now challenging a central pillar of the Trump administration’s effort to end mass migration from Central America to the U.S. southern border – the so-called “safe third country” agreement with Guatemala – is predicated on a narrative that Guatemala is beset by horrific widespread violence and government persecution.

The rapidly expanding Asylum Cooperation Agreement with Guatemala has enabled U.S. immigration authorities to fly Honduran and El Salvadoran migrants from the American border into Guatemala so they can apply for asylum there first. The American Civil Liberties Union and human rights groups complain the policy violates federal law because Guatemala is so dangerous that its own citizens are fleeing its terrible violence, persecution, and food insecurity problems.

But it turns out that these American opponents would know they have it all wrong were they ever to visit emblematic Yalambojoch, which is the middle of a region responsible for most of the recent emigration.

According to town officials and residents, the main motivation that caused all but about 300 of Yalombojoch’s 1,500 villagers to claim asylum in the United States was so that they could earn money to build large modern houses, now a ubiquitous “status symbol” du jour throughout this land of Mayan-descended peoples. Nothing about crime, violence, or government persecution.

Phillippe Marcos Domingo, a subsistence corn and bean farmer of Yalambojoch, poses with the two new 8-bedroom homes he is building on remittance money from sons and daughters who emigrated to work in the United States for that express purpose. The family plan is for their return in a couple of years to live in them.

Comparatively cavernous, multi-story, concrete modern houses, with faux-gold window and door trimmings, and eight or 10 bedrooms have gone up all over this village and in villages throughout the center of a highlands region that saw vast waves of its people head to the United States over the last couple of years. Remittance money from their people in the United States paid for the houses, which replaced more traditional indigenous dwellings of wood and mud bricks.

Hamlet leaders and residents offered, with no coaxing, that desire for the big new replacement houses – and the timely discovery of the American “Flores Settlement” loophole allowing immediate release inside the U.S. of migrants with children – were the only reasons so many left when they did. The population transfer reached at least 300,000 Guatemalans during 2018-2019, the majority indigenous peoples from this mountainous region known as Huehuetenango.

“A lot of people started to see a lot of people going to the U.S. starting to build big houses, and we wanted the same,” Francisco Santizo, who sent a 20-year-old son to the United States on the recent migration wave out, told me during a reporting trip to Guatemala last month for the Center for Immigration Studies.  “We saw that everyone was building houses and when my son grew up, he said to us, ‘I’m going to go to the U.S. now so I can send you money to build a house too.”

Francisco and Angelica Santizo pose in front of the half-complete new home they are building with remittance money a son is sending home from the United States.

Now, the Santizos have erected a three-story concrete house with eight interior bedrooms, living room spaces, and multiple stairwells. They are hardly alone in citing want of house for sending loved ones forth.

They are among three families building new homes on remittance money that offered the same explanation for sending family members to the United States. Village leaders and other residents agreed.

Plans to Return Give Lie to U.S. Asylum Claims by the Thousands

Hundreds of thousands of Guatemalans used the Flores loophole to claim political asylum and get in at the border – which requires allegations of government persecution. But if house envy as a primary motivation gives lie to such asylum claims, which it does, so do family plans for loved ones to return and live in the houses they funded.

Window dressing on a new home under construction in Yalambojoch.

The families building the houses say their loved ones plan to return once construction is complete – a debunking testament to ostensible grinding hunger, government persecution, and government-enabled gang violence peppering most media reporting, human rights group accounts, and the asylum claims. Guatemalans were among the top nationalities to file more than 615,000 asylum claims in just 2019, and also in earlier years, according to Executive Office for Immigration Review (EOIR) statistics.

According to the town’s mayor, vice-mayor and randomly interviewed residents, though, Yalambojoch crime doesn’t even warrant a police officer. No one has detected government persecution since the civil war ended a quarter century ago. And Yalambojoch is one of thousands of indigenous villages with a proud ancestral heritage of subsistence farming that provides reliable food security.

“This is a really quiet and calm place,” Mayor Francisco Pais said. “The problems of gangs and criminals don’t happen here.”

A typical new home in Yalambojoch, though not one of the larger ones.

No, he continued: “People see other people building the pretty houses, so they want to go too. They work for four or five years and then they come back and live in them.”

That international reporters, human rights organizations, and Trump critics of his safe third country policy could have missed this crucial motivating element – and still does – suggests deliberate mendacity.

About a year ago, international reporters descended on this small indigenous village to report its agony in having lost a native son, 8-year-old migrant Felipe Gomez Alonzo, to flu-related illness while in U.S. Customs and Border Protection (CBP) custody near El Paso.

The reporters framed the boy’s migratory trek with his father, along with hundreds of thousands from this highlands province during 2018-2019, as driven by “crushing poverty,” “cycles of rising debt,” “racism and violence,” climate change-induced child hunger, or the catch-all “dreams of a new life.”

The journalists who came to broadcast the sad tale of a local boy’s death (for which CBP was exonerated), could not have failed to see the houses or to receive the answer to questions about why so many town inhabitants left.

Yalambojoch residents like Consuelo Jorge Domingo don’t pretend there is any other reason for their loved ones to depart a village so safe and sustaining that they will invest in its long-term future and return to live it.

“We wanted a big house for our family like everyone else is building,” Domingo said, explaining the departure of her husband to work in the U.S.

Blue tiles and window and door dressings adorn the massive two-story house her in-laws are building for her and her 8-year-old daughter Evelyn with his remittance money.

“It will be finished soon, and then he will come home and live in it with us.”

Why Knowing This Matters

Correctly identifying “push factors” that drive mass migration can inform effective American policy responses. But getting the prognosis wrong enables problems to fester. For instance, if widespread violence and government persecution are not actually happening, then U.S. judges might rule against legal challenges to the safe third-country policy.

Beyond just that, if achieving a big house and then returning to it is the primary motivation for large numbers of Guatemalan emigres, then the probability increases by magnitudes that large-scale asylum fraud is going unaddressed. U.S. Border Patrol agents, asylum adjudicators, and immigration judges would know to weight missions to achieve bigger houses, rather than false claims about violence and government persecution when considering deportations or asylum.

One prominent proposal based on the violence-persecution-poverty narrative is for the U.S. government to send Central America a massive infusion of development aid, like the Marshall Plan for post-World War II Europe, to alleviate the starvation, violence, and government persecution that ostensibly force emigration. But the desire to fund multi-story concrete houses, far more than those terrible circumstances, scorches that rationale.

Housing greed infected the region when the first house went up in 2000. But a drive through the province found that large colorful new concrete houses are popping up in every village, showing that Yalambojoch presents an anecdotal hint at the broader undocumented reality.

Clues everywhere suggest that house envy and return plans are not limited just to the Guatemalan highlands. Center for Immigration Studies Fellow Art Arthur, a former immigration judge, wrote last year about the tragic drowning death in the Rio Grande shallows of an El Salvadoran father clutching his dead child, a case that drew international media attention to supposed desperate home circumstances that drove them to their deaths. Pretty much alone, Arthur emphasized that the drowned father’s plan was to build a big house in El Salvador-and return to it someday.

Although house envy is a primary factor driving Guatemala emigration – and perhaps some from El Salvador – one scholar documented the phenomenon as widespread in Mexico too. Sarah Lynn Lopez, associate professor of architecture at the University of Texas in Austin, authored “The Remittance Landscape” and found over 15 years of research in Mexico that new-home builds have long been a primary impetus for emigration to the United States.

“It absolutely is one,” Lopez told me in a telephone interview. “That is definitely something that people would completely agree on, and there’s evidence to back it up.”

She said the fact that this key immigration push factor hasn’t reached popular knowledge or used to direct government policy prescriptions has always “kind of amazed me.”

“But it’s definitely one of the findings,” she said. “That it (housing desire and planned returns) is an impetus for migration.”