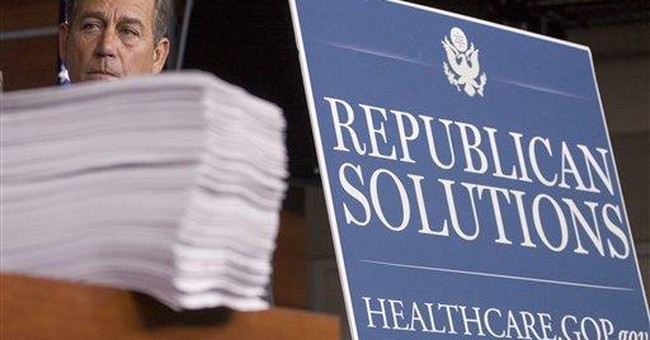 What is so wrong with the current medical system in the United States that we are being urged to rush headlong into a new government system that we are not even supposed to understand, because this legislation is to be rushed through Congress before even the Senators and Representatives have a chance to read it?

Among the things that people complain about under the present medical care system are the costs, insurance company bureaucrats' denials of reimbursements for some treatments and the free loaders at hospital emergency rooms whose costs have to be paid by others.

Will a government-run medical system make these things better or worse? This very basic question seldom seems to get asked, much less answered.

If the government has some magic way of reducing costs-- rather than shifting them around, including shifting them to the next generation-- they have certainly not revealed that secret. The actual track record of government when it comes to costs-- of anything-- is more alarming than reassuring.

What about insurance companies denying reimbursements for treatments? Does anyone imagine that a government bureaucracy will not do that?

Moreover, the worst that an insurance company can do is refuse to pay for medication or treatment. In some countries with government-run medical systems, the government can prevent you from spending your own money to get the medication or treatment that their bureaucracy has denied you. Your choice is to leave the country or smuggle in what you need.

However appalling such a situation may be, it is perfectly consistent with elites wanting to control your life. As far as those elites are concerned, it would not be "social justice" to allow some people to get medical care that others are denied, just because some people "happen to have money."

But very few people just "happen to have money." Most people have earned money by producing something that other people wanted. But getting what you want by what you have earned, rather than by what elites will deign to allow you to have, is completely incompatible with the vision of an elite-controlled world, which they call "social justice" or other politically attractive phrases. The "uninsured" are another big talking point for government medical insurance. But the incomes of many of the uninsured indicate that many-- if not most-- of them choose to be uninsured. Poor people can get insurance through Medicaid.

Within living memory, most Americans had no medical insurance. Even large medical bills were paid off over a period of months or years, just as we buy big-ticket items like cars or houses.

This is not ideal for everybody or every situation. But if we are ready to rush headlong into government control of our lives every time something is not ideal, then we are not going to remain a free people very long.

Ironically, it is politicians who have already made medical insurance so expensive that many people refuse to buy it. Insurance is designed to cover risk. But politicians have mandated that insurance cover things that are not risks and that neither the buyers nor the sellers of insurance want covered.

In various states, medical insurance must cover the costs of fertility treatments, annual checkups and other things that have nothing to do with risks. What many people most want is to be insured against the risk of having their life's savings wiped out by a catastrophic illness.

But you cannot get insurance just for catastrophic illnesses when politicians keep piling on mandates that drive up the cost of the insurance. These are usually state mandates but the federal government is already promising more mandates on insurance companies-- which means still higher costs and higher premiums.