The Honorable Sonny Perdue
|
Posted: Jan 04, 2021 11:21 AM
Share   Tweet
The opinions expressed by columnists are their own and do not necessarily represent the views of Townhall.com. 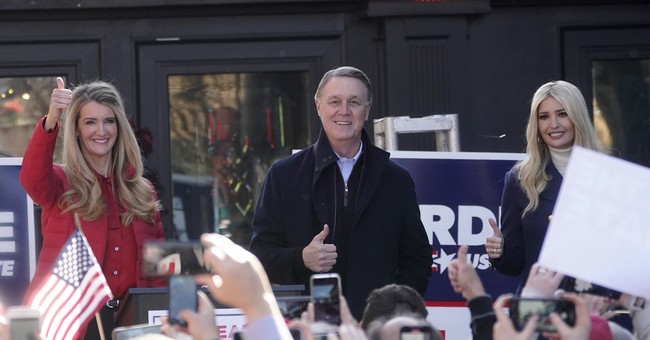 As a proud Georgia citizen, the coming run-off election on January 5th is critical for our state and our country and your Second Amendment rights are on the ballot. The Senate is the last line of defense for the rights our forefathers died for and we can’t give the radical Democrats a blank check to pass legislation that stops you from protecting yourselves and your families.

With our rights at risk at the ballot box, Georgians must keep Sens. David Perdue and Kelly Loeffler in the Senate.

The left is out to make every lawful gun owner a radical when the opposite is true. We are normal Americans who enjoy the outdoors and want to protect our families. We saw this summer what happens when the left doesn’t get what they want, they resort to ransacking their neighborhoods and taking what isn’t theirs. Small business owners and property owners were the victims. We can’t let that happen again. They have the constitutional right to protect what is theirs.

And as an avid sportsman, I cannot imagine a Georgia where we cannot enjoy that outdoor bounty we are blessed with in this state. With the direction the radical Democrats are heading, if they win the Senate, who knows what kind of new restrictions our state’s sportsmen could be in store for. Georgia will start looking like California and it will take you months to get a gun if you’re lucky. The way it starts is with burdensome regulations on legal purchases and then it is slippery slope to outright bans like they tried in the past. Whether you’re more of a winged animal hunter or you enjoy sitting in a deer stand, spend some time thinking about what it would be for that right to be curtailed.

As any free market supporter knows, bans don’t do anything but hurt the people they are trying to protect. The Peach State has long been a place where legal, responsible gun owners have felt that their right to keep and bear arms under the Second Amendment was protected. Coupled with the fact that our state is unrivaled in its enthusiasm to help out the businesses that call Georgia home, it is no surprise that the firearms industry has given back to Georgians in terms of employment, tax dollars, and direct economic impact. This will all be erased if Perdue and Loeffler aren’t in the Senate.

The firearms community has been a staple for our economy for decades. Georgia is home to six major firearms manufacturers and thousands of small family-owned businesses. As of 2019, these companies both directly and indirectly supported over 10,000 jobs, provided over half a billion dollars in wages, and generated over $1.9 billion in economic output all for our state’s citizens. These are real people that have built their careers around a constitutionally protected right. We can’t stand aside and watch the radical Democrats take American citizen’s livelihoods away from them.

However, liberal Jon Ossoff will not acknowledge that those firearm industry jobs and the wages they provide help put food on Georgia families’ tables and pay for their kids to go to school. Instead, his own campaign website says, “the only objective of the firearms industry is to drive up gun sales and enrich shareholders — even at the expense of public safety and common sense.”

While Jon Ossoff also wants to ban the most popular firearm in America, the modern sporting rifle, and won’t say why he would support an unconstitutional mandatory confiscation program for these firearms, Senator Perdue has already demonstrated strong support for Georgian families and their Second Amendment rights.

He has a proven track record of successfully fighting the radical gun control initiatives pushed during the Obama-Biden administration. He was instrumental in defeating California Senator Dianne Feinstein’s gun grab that would have given the state the power to strip Second Amendment rights from law abiding citizens if they raised “reasonable suspicion” of a threat. We can all imagine what that would mean.

The liberal media and radical Democrats know Ossoff and Raphael Warnock will be a reliable rubber stamp for Chuck Schumer and Nancy Pelosi’s court packing and gun grabbing. That’s why they have bankrolled them with tens of millions of dollars – but Georgians know better.

Chuck Schumer has already stated that they are trying to flip these two critical Senate seats in order to “change America.” Thanks, but no thanks Senator Schumer, Georgians are not looking for New York City and California liberals to tell us what kind of change is appropriate for our great state.

We need to elect Senators Perdue and Loeffler to be the firewall that stops Chuck Schumer and AOC’s radical agenda from fundamentally changing America. The stakes are high on January 5th – that is why it is so important to get out and vote like your rights depend on it, because they do.

The Honorable Sonny Perdue is the former Governor of Georgia.