Terry Paulson
|
Posted: Oct 30, 2017 12:01 AM
Share   Tweet
The opinions expressed by columnists are their own and do not necessarily represent the views of Townhall.com. 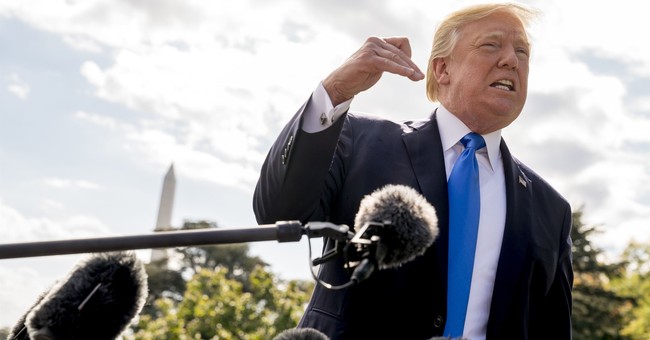 Never let the things that matter most be at the mercy of the things that matter least. President Trump’s choice of words and tendency to brag and attack anyone who dares confront him is disappointing. It’s beneath the dignity of the office and unnecessary. When you add the media’s 89% negative coverage since his taking office, you can understand why President Trump is so easy to attack.

But his no-nonsense boldness in taking on the sacred cows that roam Washington is one of the reasons he was elected. He’s not politically correct, but he has a passion for serving the people who pay the bill.

After eight years with a president who didn’t care about taxpayers other than for how their taxes could pay for his progressive transformation of America, it’s refreshing to have a president who is actually fighting to cut spending and lower taxes.

Columnist Walter Williams warns, “…the right to free speech is something we all possess. My right to free speech imposes no obligation upon another except that of non-interference. … Contrast those rights to the supposed right to decent housing or medical care. Those supposed rights do confer obligations upon others. There is no Santa Claus or Tooth Fairy. …Your right to decent housing and medical care requires that some other American have less of something else, namely diminished rights to his earnings.”

When the Democrats passed Obamacare, they provided a comprehensive healthcare plan for low-income Americans at the expense of taxpaying Americans. To make the deal worse, the cost of the same healthcare plan for millions of hard-working taxpayers cost so much that many are left with the tough decision of paying exorbitant insurance payments or going without coverage.

As a result, Trump had a campaign opportunity laid in his lap — repeal the “Affordable” Care Act and expand choices for Americans to find a coverage that fit their needs and their pocketbook. He has not yet found a way to partner with Congress to deliver on that promise. But taxpayers deserve a better deal, and he’s acted by executive order to expand out-of-state options and cut expensive subsidies to the insurance companies reaping Obamacare’s blank check.

In the international arena, U.S. taxpayers should be applauding. Claiming that the Paris Climate Accord would be a job killer that places undue burdens on American taxpayers, President Trump was quick to withdraw from the Paris Accord. He immediately ceased all implementation of the nonbinding carbon reduction targets and ended contributions to the United Nations’ Green Climate Fund. Why? Negotiate a plan that does not saddle America with job-killing targets and our taxpayers with the majority of the bill or we will not sign! America can work to do their part for the environment without paying for the world’s compliance.

Candidate Trump has promised to keep America strong and defeat ISIS, but he also promised to hold NATO members accountable for failing to pay their fair share of the West’s defense burden. In Brussels, Trump made that clear to our allies: “…23 of the 28 member nations are still not paying what they should be paying and what they’re supposed to be paying for their defense. This is not fair to the people and taxpayers of the United States. And many of these nations owe massive amounts of money from past years and not paying in those past years.  Over the last eight years, the United States spent more on defense than all other NATO countries combined.” Americans deserve a tax break and allies who pay more for their own defense.

There is more to come for taxpayer relief. Although not yet approved, the White House has released its “taxpayer-first budget” which includes $1.7 trillion in cuts for entitlement spending and a 30 percent reduction in the Environmental Protection Agency’s (EPA) budget.

There’s a need for temporary support for those between jobs and welfare for the five percent of Americans who are chronically poor. But it’s time to reward hard work and stop reinforcing government dependence for people who could be working to support themselves. President Ronald Reagan had a goal worth reinstating: “We should measure welfare’s success by how many leave welfare, not by how many people are added.”

Working more should always clearly exceed a citizen’s reward for working less. May the Trump Administration cut more spending and give taxpayers the tax relief they deserve.