A Call for Unity against Islamic Extremists 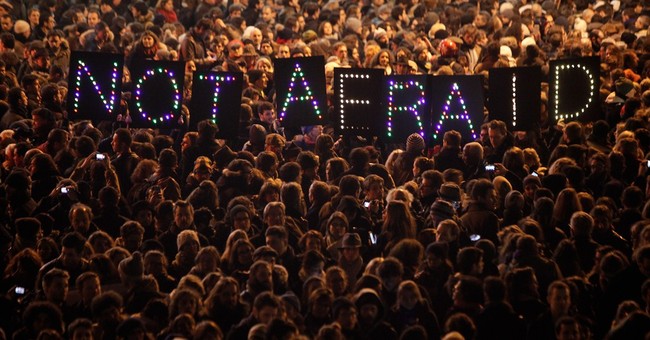 On January 7th, freedom was attacked. Three Islamic terrorists stormed the French satirical newspaper Charlie Hebdo’s office in Paris, killing 10 newspaper staffers and two police officers. As they stalked the office, the terrorists shouted “the Prophet has been avenged” and “Allah akbar!” These terrorists directly attacked free speech and the free press.

Secretary of State John Kerry responded, “Freedom has a price… They may wield weapons, but we in France and in the United States share a commitment to those who wield something that is far more powerful. Not just a pen, but a pen that represents an instrument of freedom, not fear.”

One cannot protect or attack every newspaper, television and radio station, or social media blogger. This attack demands solidarity from all freedom-loving media professionals to stand together to use our pens, computers and voices to condemn this attack. Every cartoonist and op-ed columnist should stand united against this Islamic terrorist act.

It’s also time for the millions of responsible Islamic believers to join this crusade and take back their religion. In a New Year’s day statement that received little media coverage, Egyptian President Abdel Fattah al-Sisi made a forceful and impassioned plea for an Islamic reformation, “(The) corpus of [Islamic] texts and ideas that we have sacralized over the years” are“antagonizing the entire world.” “It is not possible that 1.6 billion people [reference to the world’s Muslims] should want to kill the rest of the world’s inhabitants…. I say and repeat again that we are in need of a religious revolution. You, imams, are responsible before Allah. The entire world, I say it again, the entire world is waiting for your next move… because this umma is being torn, it is being destroyed, it is being lost…by our own hands.”

Is reformation possible? Yes. Although surveys indicate strong support for extremism and suicide bombings in some Islamic communities, it’s nowhere near a majority. There are millions of responsible Islamic citizens.

Eliminating the cloak of legitimacy and changing the hearts and minds of Muslim communities requires better understanding of the factors contributing to extremist support. A PEW Research study, Exploring Support for Terrorism Among Muslims,found that differences in wealth, politics and education didn’t significantly influence support for terrorism.

Two key factors were significant. First, fundamentalist values that limit women’s rights, such as refusing to allow women to work outside the home and requiring the wearing of a veil. Second, being a member of a Shi’a Muslim group as opposed to Sunni. Justification for suicide bombing potentially taps into Shi’a beliefs about martyrdom.

CAIR’s National Executive Director Nihad Awad condemned the attack: "We strongly condemn this brutal and cowardly attack and reiterate our repudiation of any such assault on freedom of speech, even speech that mocks faiths and religious figures. The proper response to such attacks on the freedoms we hold dear is not to vilify any faith, but instead to marginalize extremists of all backgrounds who seek to stifle freedom and to create or widen societal divisions.”

It’s time for the words of Islamic believers to give way to concrete actions. Remove any semblance of blessing to the Islamic extremists’ mission. Do everything you can to assist authorities in bringing terrorists to justice. March in the streets and speak up in your mosques against terrorists who use Islam to justify their actions.

Visibly and consistently fight for religious freedom for all. In some parts of the Islamic world, Christians and Jews are second-class citizens. Churches are being burned. Synagogues are bombed. Evangelism is punished by incarceration. Conversion from Islam to Christianity demands a death sentence. Confront your own. Call on Islamic countries under Sharia Law to give Christians, Jews and other religions the freedoms you enjoy in America.

Any Muslims ready to take a visible stand against extremism, respond to this column by name, and I will give voice to your comments in a future column. Let freedom ring!