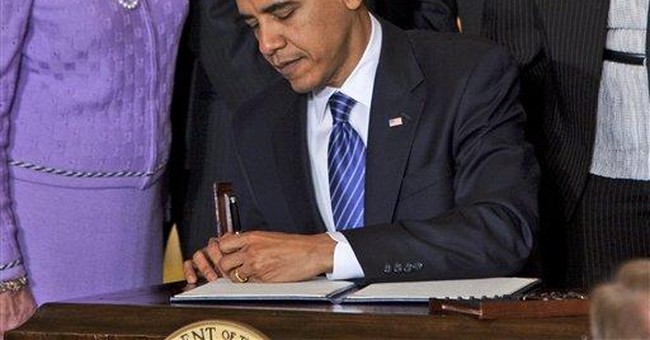 President Obama’s rapid race into socialism is creating an escalating tax revolt. With a never-ending stream of stimulus packages and new entitlement programs, the Americans who will be stuck with the bill are shouting a clear message—“Enough!”

Many organizations are calling for a Tax Day Tea Party on April 15. To Democrats “the rich” aren’t paying their “fair share,” but many of the top 20% of wage owners who pay 83% of the income taxes are taking to the streets.

Yes, President Obama is my president, and as Warren Buffett said, “We’re all in the same boat.” But if the boat’s captain is so busy enjoying his applauding throng to notice that he’s sending us full-speed into an iceberg, you better do more than just disagree!

Writing letters, complaining to your representatives, even tax-revolt demonstrations may not be enough! When workers reject their contract, they strike. Maybe it’s time for Atlas to do more than shrug! Is it time for the top tax-paying Americans to go on strike?

John Galt, the fictional protagonist in Ayn Rand's classic novel Atlas Shrugged, responded to the growing regulations and taxation in Rand’s fictional socialist America by convincing “the rich” to leave and let socialism fail. How would you respond if John Galt wrote this letter today?

I write you to warn you and to challenge you. We deserve this economic collapse. We’ve allowed our politicians to sacrifice justice to forced compassion, trade our freedom for government dependence, and confiscate earned wealth to fund more entitlements.

For over two centuries, the America Dream has demonstrated what excellence unleashed can do, but for decades, politicians have conducted a war on excellence. Personal responsibility has given way to entitlement. Instead of honoring excellence, we elect politicians to confiscate as much money as possible from wealth producers to fund entitlements for those who haven’t earned it.

Some of today’s bailout recipients are no better than burglars, but burglars don’t ask us to sanction their crime. As the government seizes your wealth through unfair taxation rates, liberal politicians want voluntary compliance from you, the tax-paying victims.

When America began, government cost the average citizen $20 in today’s money. That’s $20 a year! Taxes rose during wars, but for most of the history of America spending never exceeded a few hundred dollars per citizen. During and after World War II, government kept expanding. The cost of the recent stimulus packages alone is over $18,000 per household. We are witnessing the climax of over seventy years of creeping socialism. America created a system that produced the wealth of the world, and we’re letting the destroyers dismantle it.

Citizens and companies now compete not to achieve but to receive the biggest bailouts! They’re beggars instead of creators! The responsible citizens pay, and the beggars collect. But money taken from the achievement of others won’t buy intelligence for the fool, admiration for the lazy, or respect for the incompetent. The irresponsible takers are unwelcome hitchhikers.

We have always been a compassionate people, but compassionate Americans, not the government, should help their neighbors in need. Government should do no more than provide a helping hand to let citizens stand on their own.

When those who fund our growing federal debt stop buying, who’ll pay the bill? Washington could confiscate all the taxable income of everyone making over $75,000 and it would barely produce $4 trillion.

Our unchecked entitlement system will eventually collapse; I challenge you to make that happen now! It’s time for Atlas to shrug—to calmly, consciously and deliberately go on strike for true fairness. Our collective response must be simple and non-violent—“No More! I will cease to achieve, invent, produce, hire, serve or invest until all Americans pay the same flat income-tax rate!”

Reengage when America once again is a country that protects everyone’s rights—the right to property, the right for every person to rise as far as she’s able. We ask for no special rights—only freedom to take our own risks, to bear our own losses and to experience our own rewards.

For those of you who voted for this liberal takeover, take pause. Do you have so little confidence in yourself and your children’s ability that you can’t succeed without government subsidies? It’s not too late to choose freedom over dependence, earned rewards over entitlement and personal responsibility over collective rights.

American automobile companies can emerge from bankruptcy with a smaller but more vibrant business model. Out of a bankrupt America can emerge a leaner government based on America’s founding principles. With shared equal responsibility and shared equal opportunity, a new optimism and entrepreneurial spirit will unleash an economic recovery like we have not seen in decades.

Risk striking for a new America worth believing in!