Stuck in a Basement in San Francisco

Terry Jeffrey
|
Posted: Jan 01, 2020 12:01 AM
Share   Tweet
The opinions expressed by columnists are their own and do not necessarily represent the views of Townhall.com. 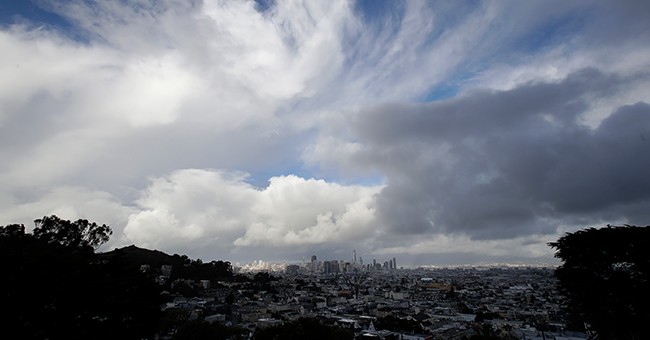 That was not a prayer -- however much one was needed.

The scene, as I recall, unfolded on a Friday night in the late 1980s.

We had started the evening with pesto and shrimp at a great Sicilian restaurant in San Francisco's North Beach.

Our group included my wife and me, one of my brothers, one of my sisters and several friends.

Over dinner, my sister told us how much she enjoyed her job, teaching sixth grade at the nearby Saints Peter and Paul School.

Many Americans who have never been to San Francisco have nonetheless seen this parish church -- in a movie theatre or on a television screen. In 1971, for example, it was featured in Clint Eastwood's "Dirty Harry." In one scene from that movie, a fictional serial killer armed with a sniper's rifle hides on a rooftop across Washington Square Park from the church.

I will not describe here what that killer apparently intended to do. But it is worth noting that Inspector Harry Callahan of the San Francisco Police Department decisively interrupted his plans.

In real life, Saints Peter and Paul is not a place of violence but of inspiration.

Its twin white Gothic towers rise majestically above the park below. Seen from the hilly neighborhoods to the east and west, those towers form an indisputable focal point in the skyline of a city full of architectural distinctions.

I suspect that I first visited Saints Peter and Paul during Christmas season. Each year, my mother would bring any of my 10 brothers and sisters who had not yet gone off to college on a tour of Nativity scenes in San Francisco churches.

Saints Peter and Paul was a likely first stop. We lived in San Rafael, which is across the Golden Gate Bridge from the city. The natural route for our tour, after we had crossed the bridge heading south, would have deposited us on the periphery of North Beach.

I believe my mother's purpose in taking us on this annual tour was to show her children that the multitude of magnificent churches spread across San Francisco were not just there as scenery. They were functioning centers of the faith.

This point was impossible to miss among the prayerful midday visitors at Saints Peter and Paul.

Other churches she brought us to visit on those annual tours included, among others, Old St. Mary's Cathedral in Chinatown, St. Boniface in the Tenderloin and Mission Dolores Basilica.

Old St. Mary's was San Francisco's first cathedral. St. Boniface, immaculate inside and out, was the principal church in an area of the city known then and now as a refuge for the homeless.

Its 1960s-era Nativity scene was popular among my siblings because it featured live animals.

Mission Dolores, completed in 1791 under the direction of Spanish Franciscans, is literally the founding building of San Francisco. It still serves the purpose for which it was built.

At that North Beach dinner three decades ago, my sister enthusiastically described not only her new teaching job but the classroom in which she taught. It was above the church and had views that looked out across the San Francisco skyline toward the glittering bay.

Given that Saints Peter and Paul was only two blocks from where we sat, we urged her to take us there after dinner so we could see it.

A guide to churches in San Francisco created by Sacred Space International describes the unique situation of the parochial school there.

"In 1925, a school opened in classrooms above the church for grades 5 and above," it says. "Children climbed five flights of stairs everyday to get to the school."

We decided to take an alternate route: a steel-cage elevator that ran from the basement up to the classrooms.

When we got to that basement, the whole group crowded onto that elevator. Someone pushed the button. There was a slight upward jerk and then no motion at all.

This was the era before cellphones. It was now late on a Friday night. Would we be there until a priest showed up in the morning to say Mass?

One of my friends offered a few witticisms about the situation, seeking to ease the tension. There were nervous laughs.

But my brother, an electrical engineer, quietly studied the cage that contained us. After only a few moments, he reached up and flipped some unpretentious piece of metal. The door to the elevator slid open.

I never did see my sister's classroom.

But I would later conclude that life is sometimes like an elevator ride. When the door finally opens, you hope to find yourself up among those soaring towers you've seen rising in the sky. But sometimes you find yourself stuck in a basement with a door that won't open at all.

Unless your brother's an engineer.