Great Places Are Hard to Reach

Terry Jeffrey
|
Posted: Apr 10, 2019 12:01 AM
Share   Tweet
The opinions expressed by columnists are their own and do not necessarily represent the views of Townhall.com. 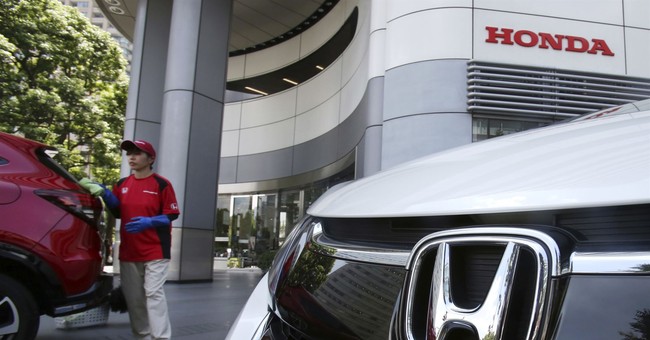 "Do you want an automatic?"

We had been in Edinburgh Airport less than 30 minutes, trying to pick up the rental car I had reserved online. It was the first step in what I thought was the flawless plan I had crafted for my wife and me to attend our daughter's graduation in Scotland and then explore the U.K. with her and her younger sister.

"Most people here use a manual," the lady explained. "It saves on petrol."

And renting an automatic would double the cost of the car.

Yes, splendid. When we made this trip a few years ago, I had not driven in the U.K. in 30 years, and I had been reminding myself that doing so meant driving on the wrong side of the road. Now I would not only need to stay in the left lane but also use my left foot for the clutch and keep my left hand ready at all times to grab the stick.

"We're staying at the Old Waverley," I told the attendant.

She produced a map and declared, "This road takes you straight there."

"Can we park near the Waverley?

"Right behind the railway station," she said.

We took the map, headed off and soon discovered there was nothing right or straight about driving in Edinburgh.

Princes Street, where the Waverley stood, was closed to private vehicles. We reached the allegedly nearby garage only after making two or three wrong turns and circumnavigating several blocks of severely narrow streets.

The half-mile walk from there to the hotel might have been a pleasant jaunt had it not involved carrying in each hand a suitcase weighing just under the 50-pound limit permitted on our trans-Atlantic flight.

But then we reached our room, with big bay windows looking out across Princes Street directly into a magnificent brownstone monument to Sir Walter Scott. Beyond that, across a park and poised on a hill, stood Edinburgh Castle.

I swore I would never drive into Edinburgh again. But this one time had been worth it.

Several days later, with our daughters in the car, we drove south from their university in Fife, heading toward England. We were on our way to another literary monument.

Our daughter, who had just received her degree in a very solemn ceremony, had told me there was a famous writer whose home she longed to see. It was in the Lake District.

"No," she said. "Beatrix Potter, the lady who wrote 'Peter Rabbit.'"

This time I scrupulously planned our route. We would avoid both Edinburgh and Glasgow, stay on the main highways as long as possible and ultimately wind our way around Windermere to Coniston Water.

In the days since we had left Edinburgh, I thought I had mastered the art of the roundabout, always turning down the right road even as I stayed to the left.

That, of course, would have included the roundabout that put us on the highway heading from Fife toward Glasgow. As we approached the outskirts of that city, according to my carefully crafted plan, we would catch another highway to take us south toward Cumbria.

We were steering clear of the dreaded streets of Edinburgh.

But not far past that roundabout, having not seen our turn to the south, we found ourselves entering the clutches of another congested city.

I was certain it must be Glasgow.

I pulled up to a car rental agency operated by a different company than the one that rented me the stick.

"Excuse me," I asked the lady at the counter, "can you tell me the best way to get from here in Glasgow down to the Lake District?"

"This isn't Glasgow," she said.

"This is Edinburgh," she said.

She then kindly gave me a much better plan for reaching the Lake District than the one I had drawn. A few hours later, we were on a country road leading into Coniston.

It, too, had a few surprises. First, it was so narrow in places it seemed unlikely any but the smallest cars could pass each other. Second, some of those places were lined on both sides by stone walls. Third, these walls sometimes extended around blind curves.

All this raised a prudential question: What if a car were coming the other way?

We slowly and cautiously closed in on Coniston, providentially encountering oncoming vehicles only where the road ran straight.

The next morning, I noticed a bus parked near our hotel. How did it get there?

Later that day, we headed up another zigzagging stone-walled road heading toward Beatrix Potter's aptly named Hill Top home. The obvious question: Would we encounter a bus?

But the encounter happened at a turn in the road where the left lane was on the inside, not the hillside.

And there was no wall to stop us from safely pulling out of the way.

My daughters enjoyed their afternoon in the home of Peter Rabbit.

Afterward, as we headed down the other side of the mountain toward the deep, calm waters of Windermere, it occurred to me that the back roads of England are a metaphor for life.

Great places are hard to reach but always worth seeking -- even when the right side of the road is a perilous place to be.