Terry Jeffrey
|
Posted: Oct 17, 2018 12:01 AM
Share   Tweet
The opinions expressed by columnists are their own and do not necessarily represent the views of Townhall.com. 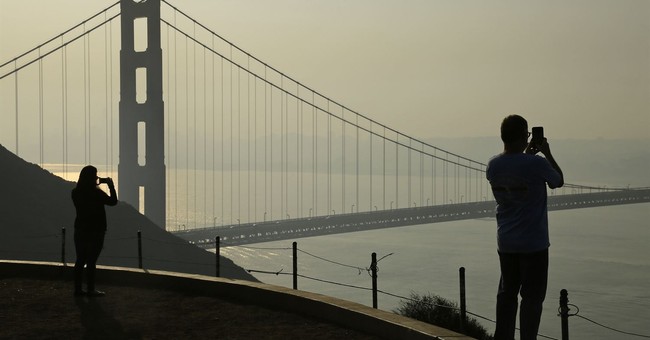 Drive through San Francisco on any given day and you are likely to see more than a few grizzly bears.

No, they will not be soiling sidewalks in the Tenderloin or chasing high-tech billionaires down Market Street. But they will be flapping in the wind above City Hall and other public buildings.

The grizzly, you see, is California's state animal and adorns its state flag. Yet not a single wild grizzly has been seen in the state in nearly a hundred years.

What did California do to its state animal?

In 1962, the state published "An Historical Review of the Wildlife Resources of the San Francisco Bay Area." It conceded that grizzlies once lived almost everywhere in California -- and described their demise.

"The grizzly bears, of which two species (Ursus californicus and Ursus mendocinensis) were represented in the Bay Area, were distributed throughout California, except along the crest and eastern slope of the Sierra Nevada," said the report.

"After the American occupation about 1850, the livestock industry which had been given a good start by the Spanish and the Mexicans, became very prominent and ranchers slaughtered the grizzly at every opportunity," it said.

"The last one reported in the State," it said, "was shot August, 1922 at Horse Corral Meadows, Tulare County."

"Grizzly Peak, east of Berkeley," the report concluded, "is a reminder of this animal's presence there."

Now the only bears romping through Berkeley play for Cal's football team.

Would it be a good idea to re-establish a feral grizzly population that could roam the University of California campus -- or the streets of San Francisco?

The people in St. Tammany Parish, Louisiana, actually face a not dissimilar question. Theirs will be decided this term by the U.S. Supreme Court.

The animal the federal government is seeking to force upon St. Tammany is not a bear that no longer lives there but a frog.

The dusky gopher frog has not lived in St. Tammany for more than half a century. In 2001, the U.S. Fish and Wildlife Service declared it an endangered species. At that time, according to a brief presented to the Supreme Court by the Weyerhaeuser Company, Fish and Wildlife estimated "the extant population at 100 frogs at one site in the DeSoto National Forest in Mississippi."

More than a decade later, Fish and Wildlife declared a "critical habitat" designation for this endangered species. This "habitat" included 4,933 acres in four Mississippi counties -- and 1,544 acres in St. Tammany Parish, Louisiana.

The Louisiana tract was a place where the frog had once lived but did not -- and could not -- now.

Weyerhaeuser, which owns part of that tract and maintains a logging business there, sued Fish and Wildlife over the designation.

Fish and Wildlife conceded that the dusky gopher frog needed three elements in its habitat. Judge Priscilla Owen, in her dissenting opinion on the U.S. Court of Appeals for the Fifth Circuit, summarized them.

The only one of these elements the Louisiana property currently features is ephemeral wetlands. As Judge Owen noted, the land is almost entirely covered with a dense closed-canopy, loblolly pine forest.

In an amicus brief presented to the Supreme Court, St. Tammany Parish argued that there is another species whose habitat needs to be considered in this case: homo sapiens.

St. Tammany has zoned this land for "Traditional Neighborhood Development." It is particularly attractive for human settlement, according to the parish, because unlike some nearby areas, it is not prone to flooding when hurricanes strike.

"The location of the property was a major factor in the zoning process for its being located north of U.S. Interstate 12," St. Tammany told the Supreme Court. "Said location of a traditional neighborhood removed its future residents and businesses out of harm's way in the inevitable event of the devastating effects from hurricanes including flooding."

But the Fish and Wildlife Service, and its protected frog, would end this local human aspiration.

"The 'critical habitat' designation removes said property from being developed and as such usurps the authority of the Parish as authorized by the State of Louisiana to manage growth by determining its highest and best use within the fastest growing Parish in the State of Louisiana," the parish told the court.

This question of whether the federal government can declare that an animal's "critical habitat" includes land that is currently uninhabitable by that animal was one of the first cases heard by the Supreme Court this month.

"You know," he told the government's lawyer, "if you have ephemeral ponds in Alaska, you could build a giant greenhouse and plant the longleaf pines and the frog could live there."

Or they could build it in San Francisco -- along with a grizzly bear habitat.