Terry Jeffrey
|
Posted: Mar 14, 2018 12:01 AM
Share   Tweet
The opinions expressed by columnists are their own and do not necessarily represent the views of Townhall.com. 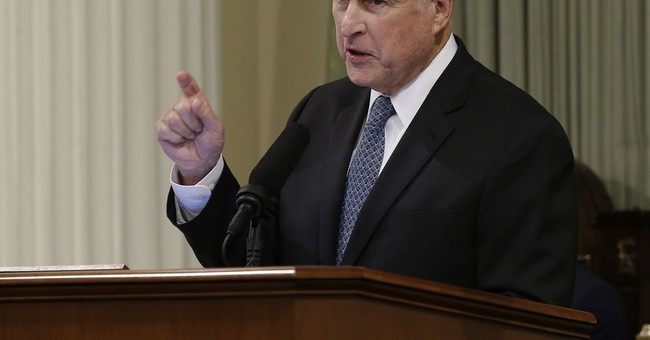 Jerry Brown once said he saw "the killing of the unborn as crazy."

This was just after the once-and-future pro-abortion governor of California returned to the United States in 1988 after spending three weeks working at Mother Teresa's Home of the Pure Heart in Kolkata.

The fact that "this country and Europe see the need to kill so many unborn does not seem justified," Brown told the National Catholic News Service in an article published Feb. 19, 1988, in the newspaper of the Miami Archdiocese.

"It is just that we've organized society to be anti-life," he said.

But then, as Brown moved back into electoral politics, he moved away from Mother Teresa's defense of innocent life.

When he sought election as chairman of the Democratic Party of California in 1989, he became pro-abortion again.

"I believe that government should not interfere with the right of a woman to choose for herself on the question of abortion," Brown said then. "That is her choice."

Later that year, in an interview with the Boston Globe, he described an unborn child as a "something" -- not a person, a baby, or a human being.

"It is killing something," Brown said. "Something is living and then something is killed. That's exactly what it is. A lot of times people don't like to face that, don't want to deal with it, but that is the truth, the literal truth."

No, it is not. The literal truth is that an unborn child is a human child. In an abortion, one human being kills another. There is a human perpetrator and a human victim.

"The moral gravity of procured abortion is apparent in all its truth if we recognize that we are dealing with murder and, in particular, when we consider the specific elements involved," he wrote. "The one eliminated is a human being at the very beginning of life. No one more absolutely innocent could be imagined."

John Paul II described in this encyclical who would condemn murder and who would applaud it.

"God proclaims that he is absolute Lord of the life of man, who is formed in his image and likeness," he wrote. "Human life is thus given a sacred and inviolable character, which reflects the inviolability of the Creator himself. Precisely for this reason God will severely judge every violation of the commandment 'You shall not kill,' the commandment which is at the basis of all life together in society.

"God thus shows that he does not delight in the death of the living," wrote this great pope. "Only Satan can delight therein: for through his envy death entered the world. He who is 'a murderer from the beginning,' is also 'a liar and the father of lies.'"

Almost three decades after he returned from his three-week stay in Kolkata, Jerry Brown, serving again as California's governor, signed a law forcing licensed pro-life pregnancy centers to deliver a message to their clients from the state government.

They could deliver this mandatory message either by posting a sign at a "conspicuous place" in their facility, or by distributing a printed notice to their visitors, or by creating a digital notice that visitors would see when they checked in online.

In plain English, Jerry Brown's law says: Pro-life centers, whose purpose is to prevent abortion, must give pregnant women a number they can call to learn where they can get a state-sponsored abortion.

Jerry Brown and his allies in the California legislature who approved this law are obviously willing to promote taxpayer-funded abortions. But they have no moral or constitutional right to force pro-life Americans -- let alone those who run pro-life organizations -- to do so.

Next week, the Supreme Court will hear arguments in a lawsuit that pro-life pregnancy centers in California have brought against this law.

The pro-life centers argue that Jerry Brown's law violates their freedom of speech. They are right.

Making a pro-life center post a phone number so women can get referrals for tax-funded abortions is akin to making a church -- or one of Mother Teresa's shelters -- post Satan's phone number.

As a previous iteration of Jerry Brown might have said: It is crazy.