The Fox and the Golden Retriever

Terry Jeffrey
|
Posted: Mar 07, 2018 12:01 AM
Share   Tweet
The opinions expressed by columnists are their own and do not necessarily represent the views of Townhall.com. 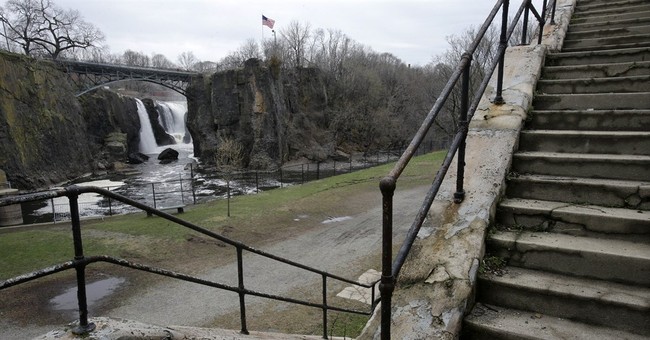 Anyone walking into Great Falls Park, Virginia, from across the winding road that marks its southern boundary has a consequential decision to make.

Should they take the hard crossing to an easy path, the easy crossing to a hard path, or the roundabout route?

For years, I never knew the easy crossing existed.

I only knew the hard crossing and the roundabout route -- and the latter did not cross over the road but instead followed a stream called Difficult Run, and then crossed under the road where the road crossed over a bridge.

The hard crossing was at a bend in the road where cars came around a blind turn. It was bordered by a steel guardrail not so tall a man could not step over it, yet not so short a golden retriever could not sneak under.

The reward for risking it was that on the other side of the narrow road -- which was punctuated by unpredictable bursts of passing vehicles -- there was a carriage road, reserved for walkers, that led easily up a reasonably sloping hill through shaded woodlands.

The reward was tempting, but the risk was great -- and my golden retriever, Champ, prudently protested whenever he sensed I might be contemplating it.

So, we made the roundabout route our routine.

Then a heavy winter storm washed out a section of the trail that ran down Difficult Run.

Champ and I gave up walking through Great Falls Park, confining our adventures to more domesticated places.

As he approached his seventh birthday, this middle-aged golden retriever sometimes showed little interest in walking -- and developed an eloquent body language for expressing his wishes on the matter.

As we approached these junctions Champ would begin pulling on the leash -- at first with some subtlety -- in the direction he wished to go. He almost always signaled a desire to take the shorter route.

If I did not comply, he would pull harder. If I still tried to go the other way, and he was in an adamant mood, he would simply sit down. He would then stare at me in reproach for failing to understand the most rudimentary of canine commands.

Then one day, after an absence of a year or more, we returned to Great Falls Park.

When we arrived, we noticed people crossing the road at the entrance to the parking lot. They then disappeared into the woods. This was the easy crossing we had never seen before.

Champ and I took it -- and discovered the hard part of this path was not the gradual climb on the way in, but the steep descent down the other side. It was a switchbacking trail from a commanding ridge to a literal swamp.

We soon learned it was possible to avoid the return trip up that switchback by taking yet another roundabout route. This allowed us to both come and go by the easy crossing.

One day as we were heading down the carriage road to that roundabout return -- just after we had passed the turnoff to the switchback trail -- a fox bounded onto the road from the swamp below.

It was the biggest fox I had ever seen. Unlike the slick red foxes in our suburban neighborhood, who looked as if they patronized professional hairdressers, this fox appeared somewhat grey and bedraggled.

I wondered how he had grown so big. Was he older than other foxes? Had he taken more prey?

Champ ordinarily treated foxes as if they did not exist. A German shepherd might demand a response from him. But a fox? Never.

Champ stopped and stared at the beast. The beast stared back. There was an anxious moment of silence.

Then the fox burst across the road and leapt onto the fallen trunk of a massive tree that ran about halfway up a hillside. When the fox reached the end of this trunk, he leapt again, landing on another trunk that had fallen in the opposite direction and now reached from the top of the ridge to halfway down the hill.

The grace of this fox in motion belied his bedraggled mien.

When he reached the end of the second trunk, he paused atop the bundle of roots as if it were his throne. He stuck out his chest, raised up his head, and turned his gaze on Champ.

An unmistakable smile then crossed his face. It was as if the fox were saying: Try that, you lumbering old canine.

He then leapt from his throne and disappeared into the regions beyond.

I tried to continue down the carriage road, but Champ's leash stopped me. I turned to see him pulling in the other direction toward the junction with the steep, ascending switchback trail.

He was soon leading me up the mountain -- resolute on reaching the ridge above.