Terry Jeffrey
|
Posted: Nov 22, 2017 12:01 AM
Share   Tweet
The opinions expressed by columnists are their own and do not necessarily represent the views of Townhall.com. 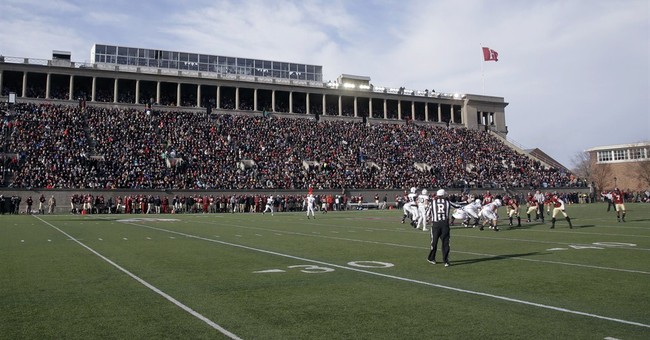 A group of students from Harvard, Yale, Princeton and Columbia met at the Fifth Avenue Hotel in New York City on April 28, 1882 and made an unambiguous decision: The United States was declaring its independence from British football.

"A proposition to adopt the English rugby rules was unanimously rejected," the New York Daily Tribune reported on May 1, 1882.

The basic concept at the foundation of American football originated in ancient Greece but came to the United States through Britain.

As early as the 12th century, the English were playing "football" games -- particularly on Shrove Tuesday.

William Fitz-Stephen wrote a biography of his friend, St. Thomas Becket, which he introduced with a description of London that celebrated the local custom of playing football on the day before Lent.

"After dinner," Fitz-Stephen wrote, according to a 1772 translation from the original Latin, "all the youth of the city go into the field of the suburbs, and address themselves to the famous game of football."

Yet, they then turned to soccer, and then to rugby, and then created an entirely new and completely American game.

When Princeton and Rutgers played the first game in 1869, he wrote, it "conformed to no recognized European code of rules."

But then, in 1873, students from Princeton, Columbia, Rutgers and Yale -- but not Harvard -- met in New York and adopted rules that Weyand described as "essentially similar" to soccer.

The next year, Harvard played McGill under Canadian rugby rules.

In 1876, Princeton called a meeting with Harvard, Yale and Columbia, which the late Delaware coach David M. Nelson described in his book, "Anatomy of a Game." It was attended by "only eight students."

But Princeton's legalistic mastering of these rules -- particularly in its games with Yale -- would soon drive the same schools that had voted to adopt the rugby-style game to abandon it.

Weyand quoted The New York Times expressing its disgust in the wake of this game: "For nearly ten minutes the men struggled without gaining ten feet either way, the 'backs' of each side being nothing but interested onlookers."

In 1880, Yale's Walter Camp suggested a new rule that would abolish the rugby scrummage. Instead, a team would be given undisputed possession of the ball, which a center could snap back to a quarterback with his foot.

These rules, however, would not penalize a team for taking a safety.

In the 1880 Princeton-Yale game, the Tigers played for another 0-0 tie, taking 11 unscored safeties.

Now, Weyand reported, Camp succeeded in rule changes that added as many as two overtime periods to a tied game and held that "the side which makes four or more safeties less than their opponents shall win the game."

But while now penalizing safeties, the rules did not penalize a "touch-in-goal" -- which involved throwing the ball to a player in the area behind your own goal line but outside the side line. When teams did this, they got the ball back at the 25-yard line.

In the 1881 Princeton-Yale game, played at the Polo Grounds in Manhattan, Princeton used the touch-in-goal to retain possession for most of the first half. Yale similarly stalled in the second.

"In an extra inning," Weyand wrote, "Princeton kept possession of the ball until darkness terminated the farce." It was another 0-0 tie.

A group of British expatriates then started a movement to kill America's nascent effort to form its own brand of football.

These British players, including one E.H. Moeran, met Walter Camp of Yale and representatives from Princeton and Harvard at Delmonico's restaurant on April 8, 1882.

"Mr. Moeran, who presided, said that he had only seen two games in this country, and if those were a sample of the way in which the games were to be played it would be better to crush football in its infancy," The New York Times reported the next day. "He asked the Americans to adopt the Rugby rules, but the Americans, speaking from practical experience, disagreed with him."

Three weeks later, the association unanimously rejected returning to the rugby rules. But they did accept another change suggested by Camp that required the team in possession of the ball to get five yards (or lose 10) in three plays or surrender possession.

That Thanksgiving, Princeton and Yale played again at the Polo Grounds. It was not a tie. Yale was leading with little time left -- but then Princeton mounted a final drive.

"Yale made a magnificent stand on the three-yard line, but the ball was pushed over," reported a history of Princeton athletics published in 1901. "But the referee was not sure whose hands were on the ball when it crossed the line, and refused to give Princeton the touchdown!"

They gave Yale the victory.

More than a century later, the NCAA introduced instant replay -- which could have determined who really won that game.