Obama Sees These People as Victims of Illegal Immigrants

Terry Jeffrey
|
Posted: Sep 14, 2017 12:01 AM
Share   Tweet
The opinions expressed by columnists are their own and do not necessarily represent the views of Townhall.com. 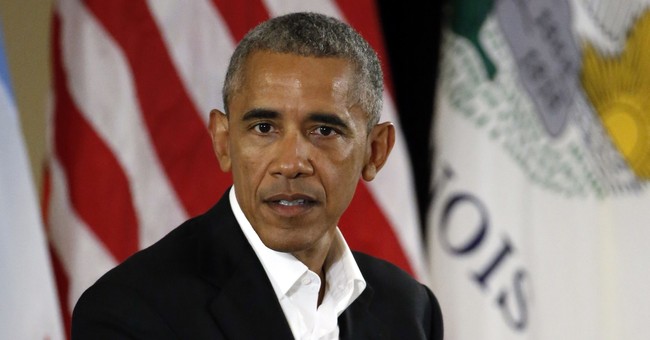 Former President Barack Obama made a profound -- if not plainly stated -- concession in an essay he posted on Facebook last week attacking a decision by President Donald Trump.

The issue: Trump's determination to "wind down" Obama's DACA program over the next six months while Congress considers what to do with the people, brought here as minors illegally, that Obama had unilaterally and unconstitutionally granted the privilege to stay and work in the United States.

Obama sought to portray this specific class of illegal immigrants as victims.

They are, he said on Facebook, "young people who are here through no fault of their own."

This, of course, raises an obvious question: Through whose fault are they here?

"They often have no idea they're undocumented until they apply for a job, or college, or a driver's license," Obama said of these same victimized individuals.

This, too, raises some obvious questions. The first is: Who deliberately deceived these young people -- over the course of many years -- and prevented them from knowing the country of their citizenship?

If these young people applied for a job or a driver's license before Obama unconstitutionally granted them the ability to do so, did they use a false or stolen Social Security number? Did they lie or tell the truth?

Did whoever was at fault for bringing them unlawfully into the United States counsel them to be honest and truthful when seeking a job or a driver's license? Or did they encourage deceit?

Does a good parent raise a child to systematically lie?

By Obama's unstated logic, the beneficiaries of DACA are victims of their own parents' dishonesty.

In a 2014 statement, then-Homeland Security Secretary Jeh Johnson came a little closer to plainly stating that DACA beneficiaries are the victims of wrongdoing by their own parents.

"Despite the acrimony and partisanship that now exists in Washington, almost all of us agree that a child who crossed the border illegally with a parent, or in search of a parent or a better life, was not making an adult choice to break our laws, and should be treated differently than adult law-breakers," Johnson said.

"Adult law-breakers," obviously, includes parents who cross the border illegally -- whether they bring children with them, leave them behind, or both.

Johnson's statement was also telling because it assumed that young people who actively make their own decision to illegally cross the border -- "in search of a parent or a better life" -- were qualified to receive Obama's unilateral amnesty. But when then-Homeland Security Secretary Janet Napolitano initially issued DACA in 2012, she described its beneficiaries as children who had been passively conveyed here by someone else.

She argued that as "a general matter, these individuals lacked the intent to violate the law."

Nonetheless, whether a child illegally crossed the border with a parent or "in search of a parent," it can be reasonably argued that that child is indeed a victim of the parent's decision to violate U.S. immigration law.

Curiously, after issuing the DACA policy on the assumption that these children "brought" to the United States illegally have been victimized by their parents' violation of the law, President Obama then issued his DAPA policy -- which, had it not been blocked in court, would have allowed the parents of U.S.-citizen children to stay and work in the United States, even though they came to this country illegally.

Here, again, one of the policy's underlying assumptions is that the parents' violation of U.S. immigration law victimized the child.

Liberals who advocate DACA and DAPA unavoidably assume that parents who live and work illegally in the United States harm their children either by leaving them behind in another country, by bringing them here illegally or by giving birth to them here while they themselves have no legal right to be here.

But if the children of illegal immigrants are indeed victims, it is not only their law-breaking parents who are at fault. It is also the fault of a U.S. Congress and Executive Branch that has not secured the border and enforced the law.

And it is not only the children of immigration lawbreakers who are victims.

It is also all the law-abiding citizens and legal permanent residents of the United States -- who pay in many ways for illegal immigration -- as well as all the people in foreign lands who would love to emigrate to the United States but are honest people and would only do so legally.