Terry Jeffrey
|
Posted: Mar 15, 2017 12:01 AM
Share   Tweet
The opinions expressed by columnists are their own and do not necessarily represent the views of Townhall.com. 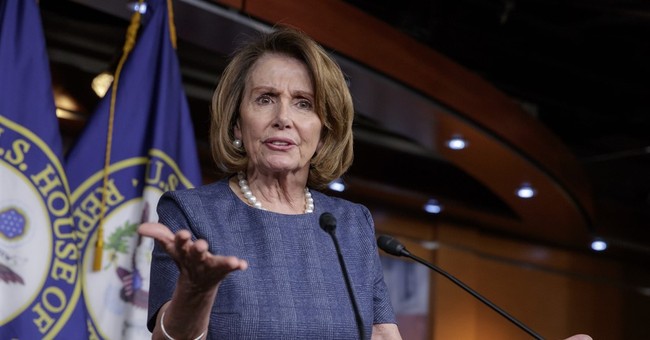 Suppose the federal government confiscated 90 percent of the income of every private sector worker who earned more than the poverty level.

Then suppose the government used some of that confiscated money to pay government workers and the rest to provide benefits to people who do not work or earn less than the poverty level.

Would that be a transfer of wealth?

How would House Minority Leader Nancy Pelosi answer that question?

This scenario, of course, is a reductio ad absurdum. But Pelosi's argument against the Republican's flawed plan to replace Obamacare is also absurd.

She essentially argues that any diminution in the amount of money the government takes from Tom to give to Harry is in fact a transfer of wealth from Harry to Tom.

The Pelosi Principle is this: If the government lets you keep your property, it is depriving someone else of it.

"The Republican bill is one of the largest transfers of wealth from working families to the richest people in our country -- Robin Hood in reverse," Pelosi said at her press briefing last Thursday.

On Monday, after CBO released its analysis of the plan, she repeated: "They are implementing the biggest transfer of wealth in our history."

"How can they look their constituents in the eye," Pelosi said, "when they say to them, 24 million of you are no longer to have coverage."

CBO outlined who it believes those 24 million will be.

Most of the first large bloc, said CBO, would not be people the government forces out of insurance but people it can no longer force in.

In 2018, said CBO, "14 million more people would be uninsured under the legislation than under current law.

But, CBO concluded, once the Republican plan was in effect a couple of years, premiums would be lower than under Obamacare -- not higher.

"By 2026," it says, "average premiums for single policyholders in the nongroup market under the legislation would be roughly 10 percent lower than under the current law."

Thus, by eliminating the individual mandate and lowering premiums, the Republican plan would prevent at least this version of what would otherwise be a government-mandated transfer of wealth from individuals to insurance companies.

The second large bloc to become "uninsured" under the Republican plan, according to CBO, would be people who -- if Obamacare continued -- would go on welfare in the form of Medicaid.

"The reductions in insurance coverage between 2018 and 2026 would stem in large part from changes in Medicaid enrollment," says CBO, "because some states would discontinue their expansion of eligibility, some states that would have expanded eligibility in the future would choose not to do so, and per-enrollee spending in the program would be capped."

Under Obamacare, the government takes wealth from people who earn more than the Medicaid-eligible income and transfers it to those who earn less. The Republican plan would diminish that transfer of wealth by diminishing the anticipated number of people on Medicaid.

Unfortunately, the Republican plan does not totally reject the Pelosi Principle.

It replaces Obamacare's insurance-buying subsidy for anyone making less than 400 percent of poverty with a "refundable tax credit" -- n.b. a subsidy -- determined by a person's age and income.

It replaces Obamacare's mandate that individuals buy health insurance or face a tax penalty with a mandate that insurers impose premiums 30 percent higher for a full year on anyone who fails to buy insurance for 63 days.

Both Republicans and Democrats have rejected the principle of subsidiarity that once governed American health care: Individuals who could not pay for their own care were covered by private, particularly religious, charities and local governments.

Now, whichever plan we get, will have at its core a massive and impersonal central government that takes wealth from one set of people, gives it to another, and uses the leverage gained from that compulsory exchange to control a key part of our lives.

Leftists Have a Meltdown After Justice Sotomayor Claims Her Colleagues Are Biased
Beth Baumann
Biden Flip-Flops on Deportation Moratorium For His First 100 Days in Office
Bronson Stocking
Nevada Caucus: The Results
Townhall.com Staff
Former Obama Campaign Spokesman Explains the One Scenario That Guarantees a Trump Victory in November
Beth Baumann
Swalwell Takes Issue With Russia Meddling in Our Elections... But Not if Bernie Benefits
Beth Baumann
The Latest Renewal At Stirring Up Trump-Russia Collusion Hysterics Is So Thin, Even CNN's Tapper Called It Out
Matt Vespa