How Harvard Drove a Wedge Into Football

Terry Jeffrey
|
Posted: Dec 21, 2016 12:01 AM
Share   Tweet
The opinions expressed by columnists are their own and do not necessarily represent the views of Townhall.com. 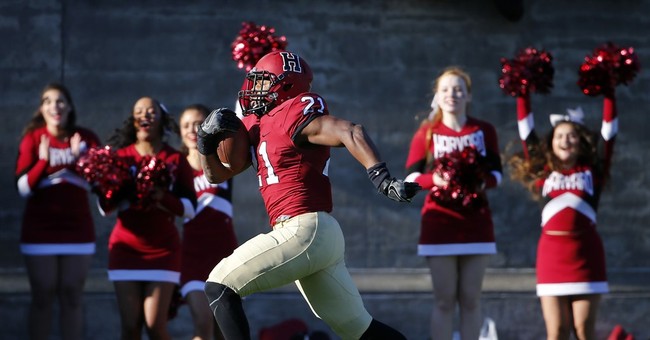 Trending
This story starts with the equally ineffective intelligence and counterintelligence activities of the Yale and Harvard football teams of the early 1890s.

Agents from Yale were suspected to be lurking in a Cambridge cemetery near the Harvard practice field.

Harvard responded by building a great big beautiful wall -- or, rather, a higher fence -- to prevent these Yale men from posing a security threat.

James L. Knox, Harvard class of 1898, later explained how an opportunistic surveillance conducted by one Yale man a continent away nearly defeated its purpose.

"In those days it was the common practice to spy on the enemy through any channel," Knox wrote in "The H Book of Harvard Athletics, 1852-1922," "and it was rumored that Yale scouts were watching daily work-outs from the tower in Mount Auburn Cemetery.

"An appeal to Major Henry L. Higginson, who gave Soldiers Field to Harvard, brought forth the money to increase the height of the fence to cut off the view from the tower," Knox wrote.

"For this, and a thousand other good reasons, Major Higginson was a welcome guest at secret practice," Knox said. "One afternoon he brought with him an elderly gentleman who had never seen an American football game."

This man was not a spy, but he became an unwitting source.

"The gentleman left that night for San Francisco and in a restaurant there shortly after his arrival, gave a crude description to his table companions of the practice and the 'Flying Wedge' as he saw it," Knox wrote.

"At an adjoining table sat a Yale man who knew football," the tale continued. "He could not, however, make head or tail of what he heard but forthwith wrote the story in detail to New Haven. The Yale coaching camp could not solve the riddle but did reach the wise conclusion that the Yale team should watch the ball with extreme care and make no move unless sure that the right thing were being done."

Yale, however, did indeed have an agent monitoring Harvard practices. Only Theodore S. Woolsey did not lurk in Mount Auburn Cemetery. He watched Harvard's summer camp in York Harbor, Maine.

Woolsey was a friend of Yale's Walter Camp, Founding Father of American football.

As related in Scott McQuilkin and Ronald Smith's "The Rise and Fall of the Flying Wedge," published in the Journal of Sports History in 1993, Woolsey wrote Camp on July 17, 1892.

"Woolsey reported that Lorin Deland was adapting 'military strategy to football' and 'testing the practicability of these new plays,'" McQuilkin and Smith wrote.

"To work them out at all," Woolsey observed sarcastically to Camp, "would require a standard of team play which Harvard is not usually up to."

But Deland, a Boston businessman new to football, was now Harvard's top strategic thinker. Like Camp, he would leave an indelible mark on football.

"For many years the standard opening play at the beginning of each half had been the old Princeton V, commonly known as the V Trick," Davis wrote.

But in 1892 against Yale, Harvard played a different trick.

"To the surprise of players and spectators, however, the Crimson did not form a V," said Davis. "Instead, B.W. Trafford, holding the ball, took a position at the center of Harvard's 45-yard line. The remaining 10 men divided into two sections and fell back to the 25-yard line, each section grouping near the side line, but at opposite sides of the field. Without putting the ball in play Trafford waved his hand and the two sections came swiftly forward in lock step, converging toward Trafford and gathering tremendous momentum as they ran. Just as they reached Trafford the latter put the ball in play and disappeared within the mass of men, thus launching against the Yale men standing in their tracks the famous flying wedge."

Davis's verdict: "No play ever has been devised so spectacular and sensational as this one."

"As this wedge was started before the ball was put in play, and as the latter was not snapped until the wedge was about to strike its objective point," Davis observed of one such play run by Yale, "it is needless to say that the impact was such that the objective point usually remembered it for years."

"Unfortunately, this season of exceptional tactical brilliance was fraught with many mishaps," Davis noted.

Newspapers carried alarming reports of injuries, some of which Davis said were "the product of exaggeration." A committee was formed, chaired by Camp, to comprehensively survey former college football players about their history of injuries and their "suggestions for improvement of the game."

"These answers when compiled and published proved that the charges against football had been exaggerated so grossly that these accusations subsided and almost ceased," Davis wrote.

But the flying wedge was banned and one of the many evolutionary periods in the rules of football began. They have delivered a sport that remains America's greatest game.

In the report published by Camp's committee, Prof. Eugene Richards of Yale delivered an enduring analysis of that game.