Terry Jeffrey
|
Posted: Feb 24, 2016 12:01 AM
Share   Tweet
The opinions expressed by columnists are their own and do not necessarily represent the views of Townhall.com. 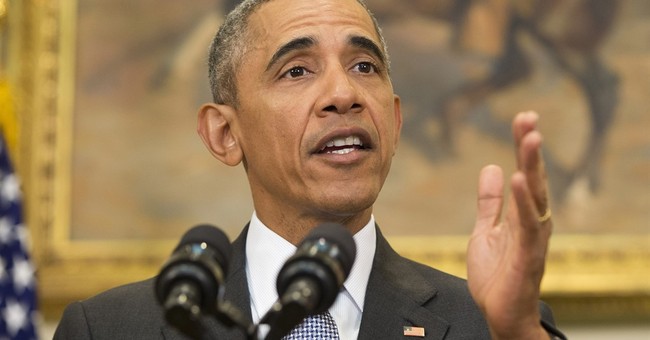 Trending
"I have never been more optimistic about America's future than I am today."

That is what President Barack Obama said in the letter he sent to Congress with his annual economic report.

What is there to be optimistic about as Obama moves through the eighth -- and final year -- of his presidency? Certainly not the economic future of the United States.

As this column mentioned two weeks ago, real GDP grew by less than 3 percent in each of the 10 years from 2006 through 2015, according to the Bureau of Economic Analysis.

That is a record: Since 1930, the first year for which the BEA has calculated real annual growth in GDP, this was the first time the United States went 10 years without 3 percent growth.

"These growth rates exceed the Administration's estimated rate of potential real GDP growth over the long run of 2.3 percent a year," says the report.

In the last six years of the Reagan administration, according to the BEA, real annual growth in GDP never dropped below 3.5 percent.

But if Obama's new economic report is correct, the greatest real annual GDP growth during his presidency will be the 2.7 percent the White House is predicting for this year.

The president's report also cited the declining percentage of Americans participating in the nation's labor force.

Much of this decline, the report noted, can be attributed to the retirement of baby boomers. But not all of it.

The administration's plan to get more Americans to at least try to find a job -- and thus participate in the labor force -- features more government programs.

"The Administration has proposed policies to support labor force participation through more flexible workplaces and paid leave, expanded high-quality pre-school, increased subsidies for child care, and a wage insurance system that would encourage reentry into work," says the report.

Subsidized "child care" is presumably designed to get more mothers of young children to enter the labor force.

At the end of that decade, in 1959, real GDP grew by 6.9 percent. But the labor force participation rate for American women was only 37.0 percent.

Even though the labor force participation rate of women has declined since 2000, there was still a larger percentage of American women in the labor force in 2015 than in the 1950s.

Yet economic growth is slower.

We need to aim for an economy where fewer women in traditional families are forced to work (even when they would rather focus on taking care of their own children) to pay the taxes to support government benefits for people who do not work.