Terry Jeffrey
|
Posted: Jan 27, 2016 12:01 AM
Share   Tweet
The opinions expressed by columnists are their own and do not necessarily represent the views of Townhall.com. 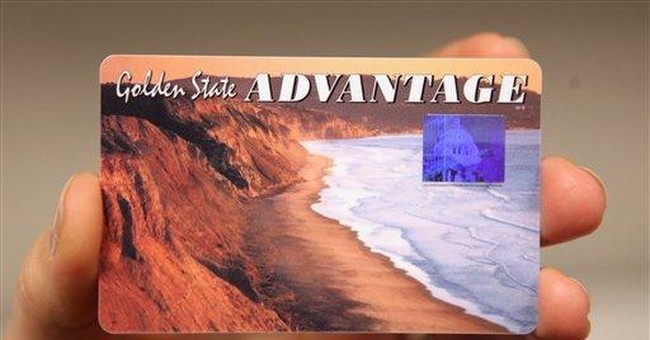 As of December 2012, the total population of the United States -- including members of the Armed Forces stationed overseas -- equaled 315,255,012, according to the Census Bureau's estimate.

At some time during 2012, according to a study the Congressional Research Service published last month, approximately 134,800,000 people qualified for one or more of "nine major need-tested benefit programs" and approximately 106,000,000 actually received benefits from at least one of them.

That means about 42.7 percent of the U.S population was eligible for one or more of these government benefit programs at some time during 2012 and about 33.6 percent actually received a benefit.

Importantly, the study looked at Medicaid separately and did not factor Medicaid into its overall estimates of how many people were eligible for and how many people actually received need-tested benefits during the year.

The report presented its first key finding in response to this question: "How many people are eligible for need-tested benefits, and how many actually receive them?"

"An estimated 106 million persons (1 in 3 persons in the population) actually received benefits from one of these programs in 2012," says the report's summary.

The CRS made its estimates using Census Bureau survey data and a microsimulation model aptly called the Transfer Income Model.

"While the federal government supports a number of need-tested benefit programs, uniform data on eligibility, participation, and benefits across programs are generally available only from household surveys," said the report. "However, respondents from those surveys tend to under-report receipt of need-tested assistance. Thus, this report combines information from a Census household survey with estimates from a microsimulation model, the third version of the Transfer Income Model (TRIM3). The need-tested benefit programs examined in this report are limited to nine cash or in-kind transfer programs and tax provisions for which eligibility, benefit receipt, and benefit amounts are estimated by TRIM3."

Why was Medicaid not factored into its main conclusions and numbers? A section of the report titled "The Special Case of Medicaid" provided an explanation.

"Medicaid is not included in the central analysis of this report. Rather, it is discussed separately (in Appendix B) for several reasons," said the report. "TRIM3 did not include estimates of Medicaid enrollment and the value of benefits for 2012. This report focuses on receipt of need-tested benefits in 2012. However, the Affordable Care Act (ACA) made substantial changes to Medicaid eligibility, which became effective in 2014. Thus, the picture of Medicaid today and in future years might be significantly different from that of 2012."

Obamacare, in fact, increased eligibility for Medicaid. Thus, it is reasonable to conclude, it is a force that will tend to drive up the number of people eligible for and receiving "need-tested" government benefits.

Four years ago -- before full implementation of Obamacare -- welfare programs had already established a widespread culture of dependency in this country. The question now: When will it become irreversible?