Leave the Department of Education Behind 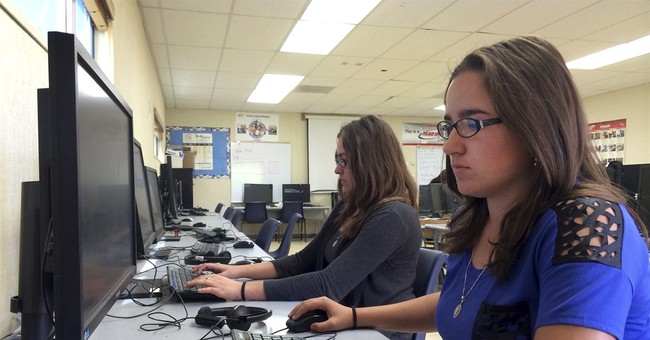 Two weeks before the 1980 presidential election, the Associated Press published a story explaining that the two major-party candidates were "poles apart on education issues."

Carter, the story reminded readers, was the Founding Father of the federal Department of Education.

"The fate of the Department of Education, the $14-billion federal agency elevated to Cabinet status less than six months ago, may hang in the balance on Election Day," said the story.

"Republican Ronald Reagan," it said, "hopes to dismantle the agency, which was created following a promise that Jimmy Carter made to the National Education Association in seeking and winning the union's support four years ago."

The story ended with a direct quote from Reagan.

"I think that this Department of Education is hoping to make come true the dream of the National Education Association, which for many years has been that we should have a federal school system, a nationalized school system," said Reagan.

The Washington Post published a similar story in September 1980.

"And only Reagan speaks and writes about ending the public school 'monopoly,' a theme that fits in with his broad philosophical belief that the private sector can do most jobs better than the government," said the Post.

The paper then cited a passage from Reagan's book, "Call to Action."

"Right now in public education we are very close to a monopoly," wrote Reagan. "Every year thousands of parochial and private schools close down because they can't compete against the public schools, which drain off more and more in taxes. Most of us are left with no choice but the public

In addition to terminating the federal Department of Education, were there any affirmative education policies Reagan wanted America to pursue?

"Reagan also supports experimentation with a controversial plan to issue vouchers entitling children to attend private or public schools of their choice," said the Post.

During his entire presidency, Reagan faced a Democrat-controlled House of Representatives, which would not have enacted legislation to abolish the Department of Education.

In 2001, a Republican-controlled House passed the No Child Left Behind Act, co-sponsored by Republican Rep. John Boehner and Democratic Sen. Ted Kennedy. Republican President George W. Bush signed it into law -- putting a "bipartisan" seal-of-approval on federal involvement in public

Today, Republicans control both houses of Congress -- and what are they doing?

They are trying to craft yet another law to reauthorize federal programs aimed at local public schools that President Barack Obama will find acceptable.

Republican Sen. Lamar Alexander of Tennessee, chairman of the Senate Health, Education, Labor and Pensions Committee, is sponsoring the Senate version of the bill.

"If we should succeed next week, as I believe we will, why then we will have a conference with the House of Representatives, and we will develop a bill we hope the president will be comfortable

Alexander calls his bill the "Every Child Achieves Act."

But what has happened in the public schools since Jimmy Carter created the Department of Education?

Did public-school students get a better education as a result? No.

In 1980, according to the National Center for Education Statistics' "Trends in Academic Progress 2012" report, 17-year-old public school students scored an average of 284 out of a possible 500 on the National Assessment of Educational Progress reading test. That rose to a peak of 289 in 1988 and 1990, then dropped back to 285 by 2012.

In 1980, Catholic school 17-year-olds scored an average of 16 points higher in reading than their public school counterparts. By 2012, they scored 24 points higher.

In 2013, only 38 percent of American 12th graders were grade-level "proficient" or better in reading, according to the NAEP test.

Only 26 percent of American 12th graders were grade-level "proficient" or better in Math in 2013, according to the NAEP test.

Was Ronald Reagan right in 1980 that America should move away from the Department of Education and toward school choice? Absolutely.