An Obama Nominee and Disappearing Persons 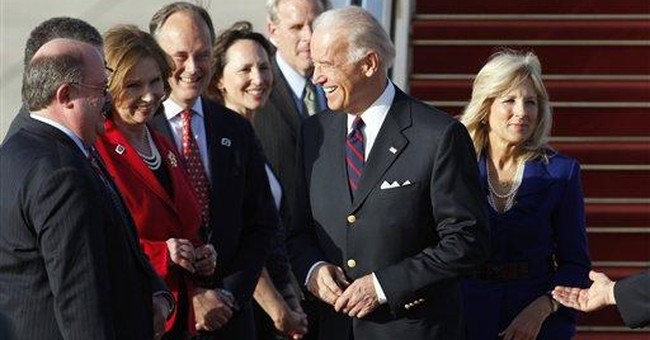 Dawn Johnsen, another of President Barack Obama's remarkable nominees, discovered a way to make a person disappear by making two persons into one.

Johnsen is not a magician. She is a Yale-educated lawyer who once served as legal director for the National Abortion Rights Action League. If the full Senate follows the lead of the Democratic majority on the Senate Judiciary Committee, which last week approved her nomination along party lines, she could be confirmed as director of the Justice Department's Office of Legal Counsel, which interprets the meaning of the law for administration officials.

As a lawyer, Johnsen has crusaded against waterboarding terrorists and in favor of denying unborn children any legal recognition at any stage of development. She essentially views an unborn child as property of the mother.

In a 1986 essay in the Yale Law Journal, Johnsen argued that the United States became a sexist society because men were able to drive women out of public life using female fertility as an excuse.

"State and social regulations concerning reproductive differences have served to create and reinforce separate and unequal sex-segregated spheres in the United States," Johnsen wrote. "Women's ability to bear children has been used to systematically disadvantage women by defining their 'proper' role in terms of that ability. Social determinations concerning the reproductive difference underlie our present patriarchal society in which men and male norms have dominated the 'public' sphere, the locus of political and economic power, while women have been relegated to the 'private' sphere, where they provide socially necessary but socially unrewarded work of care for children and home. Conformity to prescribed sex roles has been accomplished through imposition of economic, social and legal constraints, such as protectionist legislation."

She saw a great danger to liberty in laws enacted to protect babies in the womb from external threats (not including abortion) such as drunk drivers and acts of negligence. In her view, it was OK to make such laws to protect the interests of the woman carrying unborn child -- or to protect whatever interest the baby may have retroactively in its fetal existence if it is ever born alive -- but it was not OK to make such laws in the interest of the unborn child himself.

"Holding third parties responsible for the negligent or criminal destruction of fetuses is therefore consistent with, and even enhances, the protection of the pregnant women's interests," she wrote. "Yet the form that this legal recognition often takes creates the potential for future expansion of fetal rights in ways that conflict with women's interests. By sometimes identifying the fetus rather than the woman as the locus of the right when there is no live birth, recent laws have reflected a dangerous conceptual move. The law no longer recognizes the fetus only in those cases where it is necessary to protect the interests of the subsequently born child and her or his parents. Rather, the law has conferred rights upon the fetus qua fetus. Conceptualizing the fetus as an entity with legal rights independent of the pregnant woman has made possible the future creation of fetal rights that could be used against the pregnant woman. In some instances, this potential has already been realized."

Among the examples she cited were laws that would hold a woman accountable for damaging a fetus through the use of alcohol or illegal drugs.

In a 1989 article in the University of Pennsylvania Law Review, Johnsen offered a solution to the dilemma of how the law could protect the mother's right to an undamaged baby -- provided she decided not to abort it -- while not granting the unborn child any independent rights at all. She would simply meld the baby and the mother into one legal person -- in this case, the mother alone, thus completely legally erasing the life of the child.

But Johnsen can show compassion when she believes it's appropriate. "Do you believe that torture can ever be legally justified under the United States or international law?" Sen. Dianne Feinstein, D.-Calif., asked at her confirmation hearing.

"No, Senator, I do not," Johnsen said. "Do you believe that waterboarding is torture?" asked Feinstein. "Yes, Senator," Johnsen said. A terrorist, you see, unlike an unborn baby, deserves the full protection of the law as a person in his own right.