Saying No to Big Government 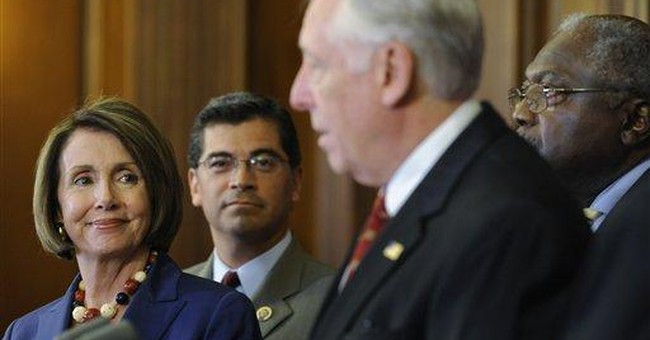 The former covet their neighbors' goods and want government to redistribute the nation's wealth. The latter believe government exists primarily to protect the God-given rights of individuals, including not only the right to life, freedom of speech and free exercise of religion, but also the right to own and use the hard-won fruits of their labors.

Recent polls indicate that even though Barack Obama was elected president in 2008 running on a platform that appealed to the former, the latter still account for the majority of Americans.

Public Policy Polling, a firm that boasts a client base of Democratic politicians, also conducted a poll last week of more than a thousand adults -- in this case likely voters in Tuesday's special U.S. Senate election in Massachusetts. The poll asked these likely Massachusetts voters: "Do you think that congressional Democrats are too liberal, too conservative or about right?" Fifty-three percent said congressional Democrats are too liberal.

The same poll asked, "Do you support or oppose President Obama's health care plan?" Only 40 percent of these Massachusetts voters said they supported it.

Yet even though voters in Massachusetts -- one of the nation's most liberal states -- have unmistakably rejected Obama's national health care plan, this does not mean Obama and the liberal leadership in Congress won't try to make this unpopular plan the law of the land.

They may look at passing their health care bill as a move that will be politically costly in the short-term but pay off handsomely in the long-term by helping to fundamentally change American culture and permanently transform American politics. They may see it as tool they can use to invert the numbers from last week's Washington Post poll: to change America into a nation where only 38 percent want a smaller government and 58 percent want a larger one.

Both the House and Senate versions of the health care bill were designed to breed dependency on the federal government among the middle class. Both plans would subsidize health insurance premiums for families making up to 400 percent of the federal poverty level.

In other words, for example, a family of four making up to $88,200 per year would get money from the government to buy insurance. They would become another class of welfare recipients -- not in their childhood or old age, not in poverty, but in the primes of their lives when they are otherwise making a decent living.

In exchange for this subsidy, middle-class Americans will surrender control over their health care to the government. They will be required to buy the type of health care plan the government wants them to buy and only from health insurance providers the government approves. Government will decide what treatment they can and cannot get.

If Americans surrender their property right in their health care to the government in this way, they will also be giving the government leverage over decisions they will make involving life and death and profound questions of conscience.

Not long after the Bill of Rights was ratified, James Madison wrote an essay insisting that respect for property rights was indispensable to protecting other human rights.

"In a word," wrote Madison, "as a man is said to have a right to his property, he may be equally said to have a property in his rights. Where an excess of power prevails, property of no sort is duly respected. No man is safe in his opinions, his person, his faculties, or his possessions."

The majority of Americans still know in their bones that Madison was right. They rightly see Obama's health care plan as a threat to American liberty. In louder and louder voice, they are saying no to big government and yes to freedom.