Biden Betrays the Military, Americans, and Our Allies

Taylor Keeney
|
Posted: Aug 31, 2021 12:01 AM
Share   Tweet
The opinions expressed by columnists are their own and do not necessarily represent the views of Townhall.com. 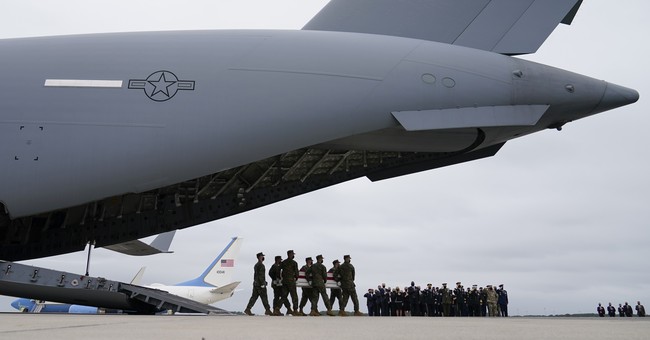 Thirteen U.S. service members are dead, $85 billion in U.S. military equipment is controlled by the Taliban, and a recognized terrorist organization is dictating American foreign policy.

Our credibility across the world is collapsing.

Through it all I cannot stop thinking about my brother, an active duty helicopter pilot in the U.S. Navy.

Over his years of service he’s often on my mind, but as I watched the news coverage of the fall of Kabul to Taliban control, and the now infamous photo of a U.S. Chinook helicopter airlifting Americans from the U.S. Embassy, I can’t stop thinking about him, his friends, and all of our service men and women.

When Defense Secretary Lloyd Austin said the American military does not “have the capability to go out and collect up large numbers of people,” I was stunned. The U.S. military might not be able to get every American out of Afghanistan? My heart sank. Then I started to get angry.

What if that was my brother?

My mind raced to the blue star moms who have sons and daughters serving overseas. Moms like my mom, who watched her son deploy last year just days after his daughter was born. And I thought of the gold star moms who lost their children during the war in Afghanistan - who today feel like their loss was for nothing.

The day the Taliban took Kabul, it was reported there were still about 10,000 Americans in Afghanistan. Missionaries, aid workers, Embassy staff, reporters. America and our allies have now evacuated over 116,000 people from the country. Yet, because we let the Taliban drive the terms of our departure, the August 31st deadline has passed and it’s unclear exactly how many Americans remain.

What happened to no one left behind?

When did we shift the entire paradigm around our service men and women overseas?

We abandoned Bagram Airfield - in the middle of the night without telling the Afghan commander - leaving us vulnerable and reliant on an unsecure airport.

We abandoned an estimated $85 billion in military equipment, helicopters, and fixed-wing aircraft. The images of the Taliban wearing American uniforms and using our gear is hard ro process.

We abandoned Afghan women who had finally seen some progress for women’s rights in their country.

We abandoned our allies as we hastily withdrew from Afghanistan with no cohesive plan to ensure all Americans and allies were safely out of the country and ensure that the Afghan government could maintain what had been built over the past 20 years.

We abandoned our national security interests, for a headline. A top Taliban political leader and Osama Bin Laden’s security chief have publicly returned to Afghanistan.

It is undeniable that America’s withdrawal from Afghanistan has been a complete failure.

People are still desperate to get out. Babies were literally being handed over the barbed wire wall around the airport to U.S. armed forces. They were camping out in hopes of getting on a flight. They’re hiding in houses risking being found by the Taliban.And safe passage out is now far from guaranteed.

Now the clock is up. The Taliban made it clear we must have all troops out of Afghanistan by August 31st and they followed through on their word. Days before this deadline, with hope all but gone, Democrats in Congress paved the way for $3.5 trillion in reckless spending, but rejected a bill to ensure we don’t leave any American behind. Unacceptable and reckless.

We are at a turning point for our military, our foreign policy, and our position in the world. We have lost the faith of world leaders, including some of our closest allies, who quite literally could not get President Joe Biden on the phone as Kabul fell to the Taliban and thousands of our citizens were stranded. And we have many service members and their families questioning what their service was for.

The last C-17 has lifted off from Afghanistan but the mission remains: get every American out of Afghanistan. Support those who stood with us on the battlefield. This is a humanitarian crisis.

We need to thoroughly investigate how this happened. How did President Biden and his Administration fail so miserably? As House Minority Leader Kevin McCarthy said, there must be a day of reckoning for President Biden’s failures.