Women Rise To Defy The Sleaze Slingers Against Kavanaugh

Suzanne Fields
|
Posted: Aug 10, 2018 12:01 AM
Share   Tweet
The opinions expressed by columnists are their own and do not necessarily represent the views of Townhall.com. 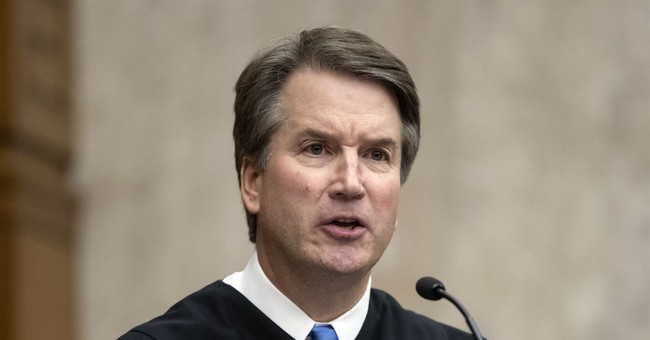 Only yesterday the Democrats in the U.S. Senate were giddy with the idea that Judge Brett Kavanaugh had united the women of America, who would pressure their senators to do him in. But the campaign to confirm Kavanaugh for a seat on the U.S. Supreme Court is beginning to look like ladies' day at the baseball park.

Successfully casting Kavanaugh as Harvey Weinstein will be difficult. Eighteen of the 25 women who have served as Kavanaugh law clerks, who know the judge best, signed a letter (the other seven couldn't sign because of current or pending employment elsewhere) describing "uniformly positive experiences with the Judge as a boss on issues of gender and equality in the workplace."

They praised him as "a dedicated mentor to all of his clerks, men and women alike," and said, "He has counseled us on our career options, provided honest and highly valued recommendations to prospective employers, and sometimes given a much-needed nudge to those of us who doubted whether we were qualified to chase our ambitions."

Some of the feminine fans of Kavanaugh hail from unexpected places. Lisa Blatt, who describes herself as "a liberal Democrat and feminist" and heads the Supreme Court lawyers at Arnold & Porter, an old-line law firm in Washington, D.C., supports the Kavanaugh nomination because "we all benefit from having smart, qualified and engaged judges on our highest court, regardless of the administration that nominates them."

Blatt writes in Politico that she thinks what the Republicans did to Judge Merrick Garland was "a disgrace." She says, "But unless the Democrats want to stand on the principle of an eye for an eye -- and I don't think they should -- folks should stop pretending that Kavanaugh or his record is the issue. He is supremely qualified. Although this fact is distressing, Republicans control both the White House and Senate. In comparable circumstances, when President Barack Obama was in office, our party appointed two justices to the Supreme Court." What's good for the goose is good for the gander, as granny used to say.

Such talk is little short of treason in this season in Washington, during which every adversary is an enemy and a dissenter from the party line is a traitor. But Blatt has distinguished company. Amy Chua, a professor at Yale Law School and author of "Political Tribes: Group Instinct and the Fate of Nations," observes that many judges choose their clerks to fit their ideological comfort zones, and Judge Kavanaugh could not be more different.

"While his top consideration when hiring is excellence -- top-of-the-class grades, intellectual rigor," she writes in the Wall Street Journal, "he actively seeks out clerks from across the ideological spectrum who will question and disagree with him. He wants to hear other perspectives before deciding a case. Above all, he believes in the law and wants to figure out, without prejudging, what it requires."

This is not what we're hearing from the Democrats who have set out to derail the Kavanaugh nomination by fair means or foul. Sen. Chuck Schumer, the minority leader in the Senate, set the tone of the opposition the morning after President Trump announced his choice for the seat to be vacated by Justice Anthony Kennedy. And in July, he said he would oppose Kavanaugh with "everything I've got."

Verdict now, evidence later means Schumer won't be confused by facts, or by reading any of the 307 opinions Kavanaugh has written over 12 years as a judge on the U.S. Circuit Court of Appeals for the District of Columbia, the more than 17,000 pages of documents Kavanaugh submitted to the Senate Judiciary Committee or the 1 million pages the committee Democrats have further demanded. That would require a lot of reading.

Desperate times required desperate measures. A liberal organization called UltraViolet, unable to come up with anything current, has demanded that the Judiciary Committee press Kavanaugh about what he might have known, or heard, or seen or could have known about the behavior of someone for whom he worked 27 years ago. That's when he clerked for Judge Alex Kozinski, who resigned his seat on the 9th Circuit Court of Appeals after several women said he had sexually harassed them. Judge Kavanaugh said that he had not heard of such complaints while he clerked for Kozinski.

The Wall Street Journal describes this as a "rise to defy the sleaze-slingers," and there's probably more coming. Forty-one Republicans voted to confirm Justice Ruth Bader Ginsburg in 1993, even though they knew she was a sure vote to protect Roe v. Wade. But those were more tolerant days. Manufactured sleaze is all the Democrats have against Brett Kavanaugh, and they sling it with glee. Fortunately, the ladies are riding up as determined avengers.