Andrew Jackson Gets a Second Look After a $20 Misunderstanding

Suzanne Fields
|
Posted: Apr 29, 2016 12:01 AM
Share   Tweet
The opinions expressed by columnists are their own and do not necessarily represent the views of Townhall.com. 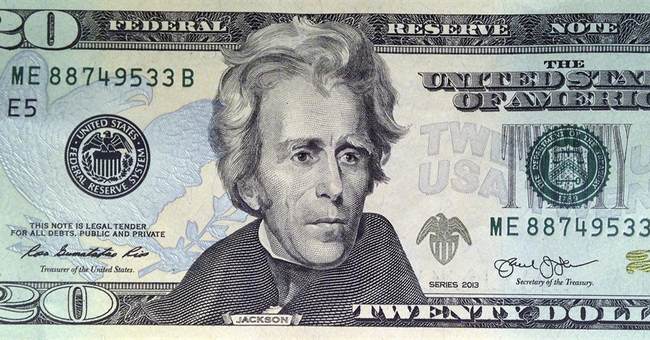 The inquiring mind of a young friend of mine, a junior at a Washington high school, wants to know: "What's the meaning of moving Andrew Jackson to the back of the $20 bill?" He doesn't discount the achievements of Harriet Tubman, who is celebrated in classrooms from kindergarten on. "Everyone knows she was a courageous woman who conducted the underground railway to save slaves," he says, "but it's an uneven exchange and a distortion of history to move her to the front of the $20 bill and move Andrew Jackson to the back."

You could take a poll of the kids in school, he says, and you will find most of them are able to recite Tubman's accomplishments, chapters and verse, but few have a clue as to why the seventh president was put on the money in the first place. You could Google a list of the top 10 U.S. presidents and see why both conservative and liberal historians put him among the best.

Jackson was an early champion of the scorned, the disdained and the disenfranchised, and he came by such sentiments the hard way. He was the first president who was not born into an established family, typical of the Founding Fathers. He was the first president whose identity was forged outside the original 13 colonies. He was a self-made man in Tennessee when the state was on the far frontier, and he diversified and democratized politics, blazing the way for any boy born in poverty to dream of rising as high as the Oval Office. He founded the Democratic Party, although some members disdain him today.

Lin-Manuel Miranda, author of the hit Broadway musical "Hamilton," could have mined Jon Meacham's "American Lion," a biography of Jackson, for telling insights into the seventh president, whose provocative opinions were as sympathetic and paradoxical as those of the first secretary of the Treasury. The pop culturalistas might be lobbying now to keep Jackson's portrait where it is because he's as deserving as Alexander Hamilton, who resides on the face of the $10.

Jackson was born in a log cabin, orphaned as a teenager, and his mother and two brothers died during the Revolutionary War. He fought in that war with guerilla tactics in the remote Carolina backcountry, maturing in later years into a skilled dueler on behalf of the honor of his beloved wife Rachel, who was denounced as a bigamist because her lawyer had not properly tidied up her divorce proceedings. Jackson was a champion for small farmers, mechanics and laborers, a fierce defender of democratic values, an outsider who captured the White House against unscrupulous insiders who he said made a "corrupt bargain." He rode into Washington with a populist wind at his back.

Jackson had flaws, first among them organizing a forced march of the Cherokees from east of the Mississippi River to Oklahoma, which the Cherokee call the Trail of Tears. But current political fashion simplifies flaws of public men.

David Greenberg, professor of history and media studies at Rutgers University, argues in POLITICO that this fashion overlooks the significant role Jackson played in promoting an egalitarian political culture. Old Hickory was the Everyman of his time: frontiersman, farmer, soldier, lawyer, storekeeper, Native American fighter and defender. He even adopted an orphaned Native American baby as his son.

Like so much in fashionable modern history, complexity is sacrificed for fads and whim. Grappling with paradoxes and contradictions, the professor argues, "is what distinguishes history from moralism or sentimentality." Educationists and politicians quickly succumb to mush. Political correctness has crept into the Capitol, this time taking a leap from the building where Treasury Secretary Jack Lew presides.

Jackson was the hero of liberal historians, such as Charles Beard and Arthur M. Schlesinger Jr., for a century until he fell prey to the PC police. Daniel Feller, University of Tennessee professor and editor of "The Papers of Andrew Jackson," is surprised that not more interest was taken in Jackson's attacks on corrupt bankers when the origins of the financial crisis of 2008 were exposed. Jackson's skepticism of establishment money is reflected in the rhetoric of Sen. Bernie Sanders and Sen. Elizabeth Warren, Feller says.

Like other great presidents, Andrew Jackson was a complex man. Like George Washington, Thomas Jefferson and others among the founders, he owned slaves; but no one has suggested taking Washington off the dollar bill or leveling the iconic memorials to Washington and Jefferson. Not yet.

Martin Luther King dreamed of the day when a person would be judged not by the color of his skin but the content of his character. He further said that "the function of education, therefore, is to teach one to think intensively and to think critically." Harriet Tubman deserves to be remembered intelligently and intensively, but without dishonoring Andrew Jackson. He brought "democratic dignity" to the common man. No small gift.