The Antique Feminism of Hillary Clinton 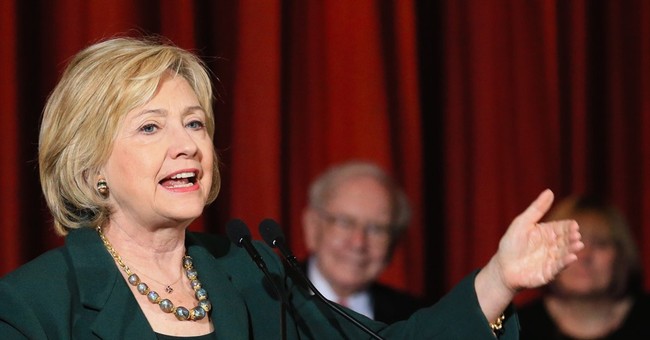 Trending
The Republicans have sucked all the oxygen out of the room with a race that's finally getting really interesting. Bernie Sanders is vanishing into irrelevance and the Hillary Clinton story of the Republican week was about how she is losing traction with the new generation of women voters. Not exactly the attention she and the party want.

Feminism just ain't what it used to be. If the suffragettes are ancient history, remembered for heroism in an antique age (with the help of a major motion picture), Hillary Clinton's run for the feminist vote suggests vintage clothes, ankle-length skirts and granny glasses, styles she wore when she was a mere governor's wife in Little Rock back in the '90s.

She looks more and more like she will be the first woman nominated by a major political party for the highest office in the land, and the glass ceiling has been broken in so many places by women who have ascended in politics, business, academics, law and medicine since she left Wellesley that she needs a makeover to appeal to a younger generation of women. Changing the color of her hair won't do it.

"She's your mom's candidate," Katherine Jellison, a professor of women's history at Ohio University, tells the Hill, the Capitol Hill political daily. "She and the Clinton machine seem like old news to a lot of millennials. And if you think about where youthful activism has been -- other than LGBT issues -- it really hasn't been with gender issues but class issues, like the Occupy movement."

If the older generation of women who identify as feminists is respectful of Clinton's changes over the years, younger women often aren't, with their opinions running from tepid to contemptuous. The radicalized sophomores on campus have no patience with her coy declaration that she would be "the youngest woman president in the history of the United States."

To the activists on the left, her magic carpet ride into politics and wealth was as a passenger on her husband's carpet, with a sense of entitlement well within the elite establishment. Her ideological inconsistencies, such as her flip-flop on same-sex marriage, speak of the ways she is perceived as a "has-been feminist" -- the over-the-hill Hillary Clinton. She has small appeal for the youngest millennial liberals who groove on Black Lives Matter and are fans of Ta-Nehisi Coates and his call for "revolution."

Small part of the millennial generation or not, these women speak in loud voices, and are the young voters Hillary is counting on to vote for "the first woman president." But many of the women of the feminist revolution -- "the sisterhood" forged in the '60s, now more than a half-century ago and that Clinton felt a part of -- begat children radicalized with promises of profound change. Clinton and the aging sisterhood no longer sound so profound.

A young female college student, age 20, who supports Bernie Sanders because he promises to cure income inequality, tells The New York Times if she's for Hillary because she's a woman, "that's equally as bad as not supporting her because of her gender."

Conservative women live in a different ideological universe, and many see Carly Fiorina, in contrast to Hillary, as the savvy woman, comfortably conversant with electronic media and without the carpetbaggage of a feminist of yesteryear. They think she could be a strong vice-presidential candidate. She comes out of the high-tech world, arguing that the Obama government missed certain terrorists because they were using the wrong algorithms: "This is a place where the private sector could be helpful because the government is woefully behind the technology curve."

Fifty-two percent of women lean Democratic, compared with 44 percent of men, and President Obama won huge numbers of the young, black and Hispanic women that Clinton needs in order to win, and she must inspire them in the primary season to get them to show up for her next November. The Clinton campaign continues to fear Marco Rubio most; he would appeal to many of those same Hispanic voters. Carly on the ticket might bring along some of those young women, too. The primary days dwindle down to a precious few, and expectations tighten.