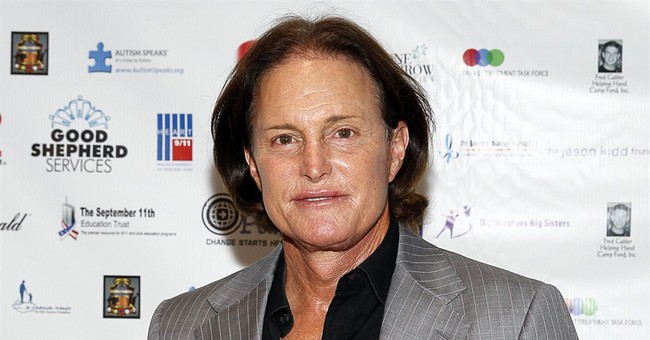 In the age of the selfie, Bruce Jenner may be the icon of our time. He sustains two images of himself to mediate the feuding feminist and chauvinist attitudes at the center of today's battle of the sexes (should that be the "grind of the genders"?). At the age of 65, reflecting on his life as the athletic hunk who married three times and sired six children, he says he can now liberate a laidback distaff self that is the "soul of a woman."

In an interview with Diane Sawyer of ABC News, the man most recently famous as the patriarch of "Keeping up with the Kardashians" explains why he finally decided to go forward as a female, if not quite a matriarch: He didn't want to die having known only the male side of a life he lived as a lie.

For the young who never knew the 1976 winner of Olympic gold in the decathlon, who don't remember the face on a box of Wheaties, "the Breakfast of Champions," Bruce Jenner is the poster boy for transsexualism. The handsome square-jawed face from yesteryear, softened with plastic surgery that has shaved his Adam's apple, tries now to look more like Eve.

He removes the clasp on his ponytail, lets down his hair with a swish of femininity, and it falls to his shoulders as he sits up for his interview. The actor became actress, and the audience is nudged to appreciate the forged sexy female image that awaits him.

Although he says his brain is already more female than male, the body needs more than a little help to catch up to the feminine side he cultivates. His nose was made smaller and hair removed from face and body through electrolysis. A developing bosom puffs through his T-shirt. He hasn't decided yet whether to go for "sexual realignment" to eliminate the most telling sign of manhood that would be his ultimate senior moment.

Some are tempted to mock or laugh, but the idea of the transformation of Bruce Jenner affects the way the rest of us see the 700,000 men and women that the Williams Institute at UCLA says are "transgendered." But their life experiences add up to no laughing matter. Some seek change through hormones, others through radical knife work. Still others limit themselves to changing fashions. Many have been abused, physically and psychologically. Some have tried to kill themselves. Three times more men than women seek such radical change.

Bruce Jenner says he couldn't have "come out" before he earned big money from the Kardashian reality show. The costs of going over to the other side can run more than $50,000, so he will continue to sensationalize, personalize and monetize his journey on a new docuseries to show the physical changes. He thrives on publicity. More than 17 million people watched his interview.

This is a story about him, but also about the rest of us, and the voracious public appetite for graphic sexual detail. There are serious issues posed by transsexualism. Who goes to which rest room at school? Who plays on the boys teams and who plays on the girls teams? Medical insurance and how it covers sexual transitions is another complicated consideration.

In politically correct conversations, it's considered "preferable" to use the plural "they" rather than the specific "he" and "she." (Nothing takes a greater beating in the cultural wars than the language.) It gets more complicated for mothers and fathers. Trans-gendered parents have been called "Moppa" and "Maddy" and probably "Mad."

The sexual ground was broken before Bruce Jenner became an icon. Laverne Cox, star of the television show "Orange is the New Black," posed on the cover of Time magazine with the headline: "The Transgender Tipping Point: America's Next Civil Rights Frontier."

Few seem concerned about the young and impressionable, the unformed and vulnerable, the children and teenagers who have yet to come to terms with their sexual identity. They often try on experimental personas, and they are most at risk in this one-sided information marathon. It might define them more than it should. One transgender specialist says 80 percent of boys who identify as girls grow out of it. The web of transgender tactics is tortuous and tangled.

In a provocative book, "The Man Who Would Be Queen: The Science of Gender-Bending and Transsexualism," J. Michael Bailey, professor of psychology at Northwestern University, argues that the transsexual is typically seeking romantic fulfillment. "Those who love men become women to attract them," he writes. "Those who love women become the women they love." Is that poetry or prescription?

Bruce Jenner's story is one surprise after another. The most eye-popping revelation by Bruce Jenner -- Diane Sawyer was left momentarily speechless -- is that he is a Christian, a conservative and a Republican. Try to imagine that.