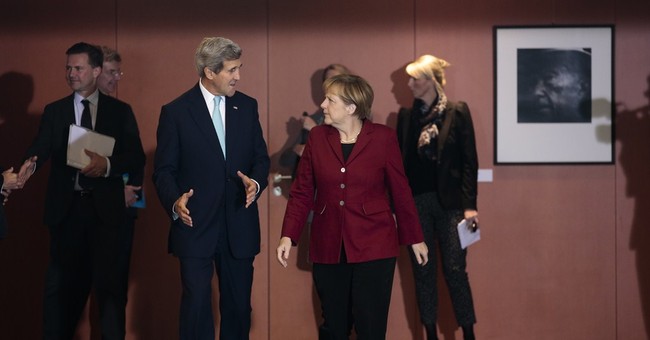 BERLIN. Angela Merkel tops the Forbes magazine list of the hundred most powerful women in the world for the fourth consecutive year, but these are difficult days for the German chancellor. The leading men in her life are making that life complicated.

She was shocked and dismayed when she learned that President Obama eavesdropped on her cell phone, and she hasn't forgiven him. The National Security Agency taps on her phone, she says, are "like the Stasi," the infamous East German secret police. That was particularly horrifying for someone who grew up in East Germany where everyone was under constant government surveillance. Not even a cordial stopover in Berlin from Secretary of State John Kerry this week could make her forget that.

But it's not just Mr. Obama in her doghouse. There's room for Russian President Vladimir Putin, the former KGB agent, in there, too. He was hours late for a private meeting with her last week in Milan, and when she finally sat across the table from him the meeting did not go well. She has been the one major Western leader who has continued to talk to him frequently in the wake of his incursion into Ukraine. She wants to be a bridge between NATO and Russia, but nevertheless supports the Western sanctions meant to confront -- and correct -- Mr. Putin's "in your face" behavior, a relic of the Cold War. She speaks Russian fluently, but he doesn't listen reasonably.

And it's not just the men in her life causing her heartburn. Ursala Von der Leyen, Germany's first female defense minister who some Germans think might be Frau Merkel's successor, has suggested that Germany may not meet its long-term NATO commitments because its military is in such sad shape. Transport planes have been grounded, submarines sidelined and tanks delayed, in need of repair for lack of spare parts. This pleases certain German men who scoff that this is what happens when a woman is sent to do a man's job.

The problem is nevertheless real. "At the moment, we are below the target numbers announced a year ago on airborne systems we would want to make available to NATO within 180 days in cases of emergency," the defense minister tells the German newspaper Bild am Sonntag. When she dispatched weapons to the Kurds, many of the anti-tank weapons, rifles and machine guns never got there because the planes to take them there were grounded for repairs. Spare parts are scarce. Typhoon fighter jets suffer technical defects.

The defense minister complains that she inherited the maintenance problems from her predecessors, but they're happening on her watch, and critics have eagerly put the blame on her, mocking her management style. This has inevitably hurt Frau Merkel; she, too, is blamed for the lack of military readiness.

The chancellor has enjoyed a reputation for having an unerring sense of the national mood, but feminine intuition has been undercut by the revelation that her office conducted more than 600 public-opinion polls between 2009 and 2013. No one outside an inner circle has been privy to them, according to the newsmagazine der Spiegel. This is business as usual for a powerful leader -- Ronald Reagan consulted astrologers, and Bill Clinton commissioned polls to determine where to take his family on vacation -- but Frau Merkel made a public point of paying no attention to polls. The straight-ahead leader looks a little deceptive herself.

Her many defenders remind everyone that she regards herself as no ideologue but a pragmatist, that the polls merely keep her in touch with what the public is thinking, that her decisions are her own. She insists that she works with a broad consensus, and indeed she seems to be appreciated for her "protective" instincts. "Mutti," or "Mother Merkel," is meant as irony, and she relishes the reputation for being a mother who dishes out tough love. Hence the tough EU sanctions against Russia and the message it sends to Vladimir Putin.

Berlin approaches the 25th anniversary of the fall of the Wall next month deeply aware that the fall was not the end of history, and unification demands full public documentation of Germany's 20th-century history. The old offices of the Stasi will open to the public in January with an exhibition documenting the old regime's extensive spying on Germans. As a result, for all their hipness, Germans regard free-wheeling social media with caution and big data with wariness, skeptical of who's minding the minders.

When Germany won the World Cup there was a joyous sense of forward-looking freedom, a celebration of what it means to be a new German, liberating ordinary Germans from the guilt for their horrendous past. But Angela Merkel, who grew up in the East, is living proof that memory teaches hard lessons.