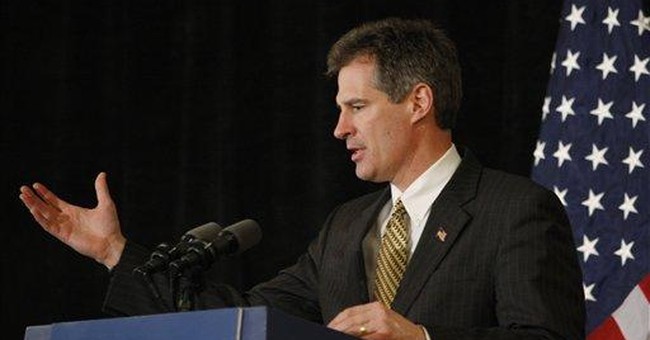 Scott Brown arrives in Washington driving his famous truck, and he looks like a million dollars -- Jimmy Stewart playing Mr. Smith. President Obama polishes his State of the Union Address and suddenly he's looking discounted to more like a few thousand dollars. The two events are not unrelated.

The president will speak to the joint session of Congress next week as his approval ratings have fallen from a high of 70 percent a year ago to less than 50 percent, proving once more that in politics nothing recedes like success. At this time last year, Obama was President Possibility, with everybody cheering his promises and expectations. This year, he's President Impractical, exposed as the Pied Piper who suddenly can't seem to squeeze a note from his dented musical pipe.

Only a month ago, Scott Brown was trailing state Attorney General Martha Coakley by 20 points, headed toward the oblivion of returning to the state senate. His five-point triumph was all the sweeter for it, the accomplishment of the impossible dream of election to the U.S. Senate as a Republican in Massachusetts.

Democrats in Washington are trying to spin the upset as merely the work of an inept candidate running a poor campaign, but nobody in the Democratic spin dryer actually believes that. Brown kept his eye on the prize, driving his message of lower taxes, smaller government, cutting spending and above all squashing the monstrosity of ObamaCare. He tapped into anger at an administration in Washington that has grown arrogant and out of touch in only 12 months. Scott Brown won the argument in Massachusetts, but the message, like the buck, stops in the Oval Office.

How could such an outlandish upset happen? Let us count the ways. First of all, the gap between what the people expected Barack Obama to be and what he became has widened into a canyon, and the rhetorical flourishes that so mesmerized so many have become a form of self-mockery. The empty vessel the voters filled to overflowing with summer hopes and winter dreams could not withstand the weight of radical ideology, and he has suffered for it.

To the tea drinkers on his right, the president lacks the moral conviction they seek in comparisons to Ronald Reagan. To the left, he's been unable to assert the passionate intensity required for expanding the government to the taste of liberals -- or "progressives," as they now call themselves. To the swelling numbers of disaffected independents, he shows none of the finesse of triangulation that Bill Clinton mastered in compromising with Republicans over welfare reform. The Obama center cannot hold.

Then there's the transparency issue, which voters across the ideological spectrum crave -- the transparency which Obama said would be the clear glass through which we could watch how his policies were made. Transparency turned out to be as ephemeral as a campaign slogan written on a balloon floating in the rafters at Convention Hall.

Keeping the congressional health care debate off C-SPAN turned off the millions of political junkies who regard Brian Lamb's network as the source of knowledge. Democrats blame Republicans for making bipartisanship impossible, but it was President Obama who handed over leadership on health care "reform" to the congressional tyrants whose approval ratings are worse than his. He put out the fire and turned out the Blue Dogs. They were left to fend for themselves.

The president was aware in last year's State of the Union how his economic recovery agenda could be received with skepticism. "Here in Washington we've all seen how quickly good intentions can turn into broken promises and wasteful spending," he said. "And with a plan of this scale comes enormous responsibility to get it right."

He promptly got it wrong. The health care that would "bring down our deficit in the years to come" promises instead to increase the deficit. It raises costs for Medicare for those he said would see not their medical costs rise. The "Cadillac tax" was unfair business as usual in Washington.

Reminding Massachusetts of this was catnip for Scott Brown. "The people do not want the trillion dollar health care plan being forced on them," he said. Indeed. Voters everywhere don't want backroom deals and payoffs to Nebraska or a new "Louisiana Purchase."

The schedulers for the State of the Union have taken care not to conflict with fans eager to watch the three-hour premiere of ABC's "Lost." The president's address precedes "sweeps" week, so we can watch without distractions to see whether the president understands what the Scott Brown phenomenon was about, and whether he's rethinking how to "get it right." If he doesn't, he can still watch the premier of "Lost." The title alone should make a painful point.