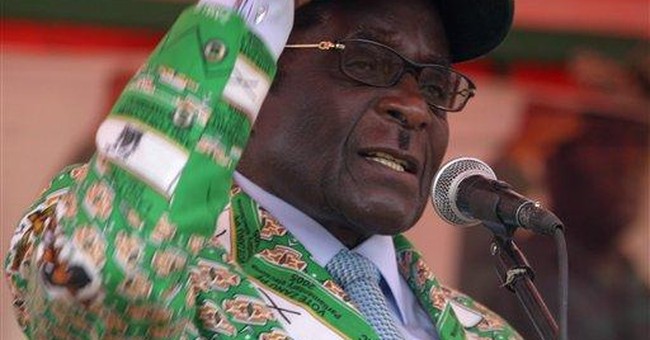 If you had met him, you might think he "had kicked himself loose of the earth" and "knew no restraint, no faith and no fear." He was once perceived as "remarkable" and a man of great promise, but had descended into unspeakable madness in the heart of Africa.

That's how the novelist Joseph Conrad describes Kurtz, the white man who leaps into lunacy in the Congo and becomes the focus of "Heart of Darkness," the novel Conrad wrote at the end of the 19th century. His horrific descriptions, I discovered when I recently read the book again, fit Robert Mugabe in Zimbabwe.

The black man who transformed himself from idealistic freedom fighter to ruthless tyrant destroyed Zimbabwe along the way. The authentic African hero who set out to do good for his people made a mockery of the dreams and aspirations of those people. He ordered the deaths of at least 86 of his countrymen and the torture of thousands of others for the crime of wanting to vote for someone else to lead the nation.

Morgan Tsvangirai, the leader of the opposition, yesterday withdrew from the national election, scheduled for tomorrow, because Mugabe's escalating campaign of blood and intimidation makes a free and fair election impossible. "We cannot ask the voters to cast their vote when that vote could cost them their lives," he said. "The regime does not even want to pretend the election would be free and fair."

Kurtz -- Conrad gave him no other name -- would understand the corruption and violence. The fictional hero was himself larger than life, moving from idealism -- from believing he was a civilizing force -- to descending into the darkness of his own making in a carnival of barbarity. At the end of his life, he is surrounded by a circle of disembodied heads impaled on spikes.

Robert Mugabe, alas, is real enough -- a corrupt and vicious maximum leader who turned his nation from the breadbasket of a continent into a rotting wasteland. He lives in a "bubble of his own creation," observes Heidi Holland, who interviewed him for her book, "Dinner With Mugabe." He sees himself as right, never wrong. He made a hell of his country.

An analogy between fiction and real life is rarely precise, but a great novelist lends understanding of the evil that men can do. This is sometimes painful. "Heart of Darkness," accurate and insightful as it may be, has fallen prey to narrow prejudice, banned from many classrooms. If read at all, it's usually seen as a racist tract, even though the descriptions in the novel are no more racist than the news accounts of the Mugabe madness. Current opinion reflects what "is," just as Joseph Conrad reflected what "was."

"Heart of Darkness" was once assigned reading for schoolchildren in the United States and Great Britain, and is included in the Norton Anthology of English Literature. But just as truth is stranger than fiction, so fiction is sometimes an unbearable truth. Chinua Achebe, the Nigerian poet, novelist, critic and Nobel medalist, denounced the novel as 'bloody racist" and its author as a "thoroughgoing racist." The novel disappeared from classrooms.

Certain passages describe racist episodes, true enough, but Conrad presents them in their authentic era and invites readers to judge for themselves the evil that men do. Accurate news accounts of what Robert Mugabe is doing in Zimbabwe could be described as "racist," too, but Conrad explores racism from different angles, as only a novelist is free to do.

The Belgian colonizers saw the native Africans as "savages" and ruthlessly exploited them for commercial gain. The descriptions in "Heart of Darkness" are grotesque and powerful, and impossible to read without feeling outrage rising like bile in the throat. So, too, the outrage on reading the news accounts from Zimbabwe. Conrad makes it clear that "there was a touch of insanity" to the colonial enterprise in the Congo. There's more than a "touch of insanity" in the criminal Robert Mugabe, too.

Literature at its best describes social changes and emotions through specific plots, characters and settings and invites the reader to look more deeply into the heart of man. Joseph Conrad is no more the creator or condoner of evil than the journalist who observes and describes the evil of Mugabe and his thugs. The novelist captures complexity to expose the gradations of good and evil lurking in the human heart.

At the end of the novel, Kurtz, doomed to live in the heart of darkness created by his own hand, sees and understands what he has wrought, exclaiming: "The horror! The horror!" Robert Mugabe lives in a similar bubble of barbarity, but has yet to understand the evil he has created. The people he betrayed feel it all too well.