Voter, Know Thyself: A Stereotype Can Cripple a Candidate 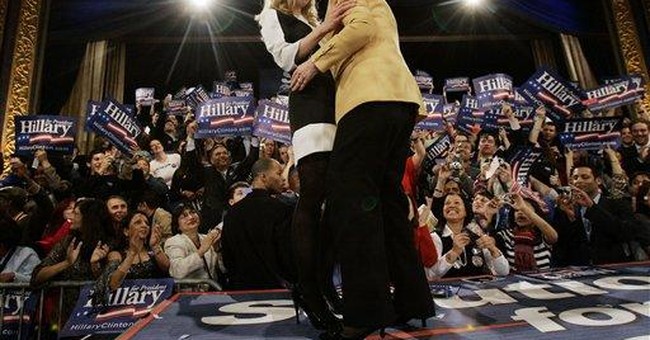 They're the best of stereotypes; they're the worst of stereotypes. The three candidates still standing tall are: the white lady who could be the first female president, the black man who could crash through the racial barrier and the hotheaded war hero with feet of nonpartisan clay.

The stereotypes cut two ways. When Ted Kennedy, the liberal lion beloved of feminists, threw his support to Barack Obama, the New York chapter of the National Organization for Women called him a traitor to the cause, as if all Hillary has to offer is her sex (or gender, as we're supposed to call it now).

When male candidates sharply disagreed with Hillary in the debates, the feminists, not manly men, rode to the rescue of the damsel in distress. The bullies were piling on, as though the little lady wasn't armed to fight back. There were the tears. When Hillary cries women rally to her, identifying with feminine vulnerability. That leaves us with lots of inconsistencies in Hillary's campaign to become the first female commander in chief. Fortunately for her, voters rarely hold consistency to be the highest virtue.

Barack Obama is a horse of a different color, literally and figuratively. He campaigns forcefully as a unifier without making a big thing of the color of his skin. Bill Clinton nevertheless drew attention to it with a comparison to Jesse Jackson, who plays the race card without shame. Most of the rest of us want to think of Sen. Obama as the poster child of a new face for America to show the world, relegating racism to a dark and tortured past. But this insinuates another problem. The Obama rhetoric, devoid of intellectual substance, is revealed as little more than an eloquent voice for "change," whatever that is meant to be.

He has effectively separated himself from the denigration that comes from victimhood. No one doubts his smarts, but white approval is often little more than feeling good about liking him, and this smacks of attitudes of white paternalism. Shelby Steele, author of "The Content of Our Character," observes such complexity in his new book, "A Bound Man: Why We Are Excited About Obama and Why He Can't Win." He was in Washington last week to talk about his book and conceded ruefully that his subtitle may have been premature. He nevertheless goes directly to a dilemma confronting anyone who holds the senator's innocence as power, avoiding the tougher questions about the content of his character.

Sen. Obama could become a Rorschach test for white voters who seek to project their collective guilt onto him without looking beneath the surface of an attraction that might be only skin deep. "There is a tendency to see Obama as a kind of 'new man,' someone spared the intractable fates of being simply black or white in America," writes Steele, who knows about being a black man in America. "Out of an understandable race fatigue, many Americans want to believe that there are people on whom race sits very lightly, people whose very hybridism suggests the possibility of transcending race." Barack Obama, he insists, is not that man.

We want to love him as we love Louis Armstrong, although we've never heard him play anything real on his trumpet. We admire him as we admire Martin Luther King, although he has not yet lived the example of King. Sen. Obama is, in the words of Shelby Steele, an "iconic Negro," who shares our values, our worldview and our democratic goals.

John McCain remains the familiar codger we confront with the same old tough questions. His divided constituency honors him for his bravery as a prisoner of war, but when he doesn't agree with all of us on everything, some of us focus on his flaws, his temper and his lack of complete fealty to every conservative view. He's the warrior we trust most to defend our security, but he'll have to fight hard against the stereotypes of gender and race that give momentum to the Democratic candidates. He can say, like Popeye the Sailor Man that "I Yam What I Yam," but he's another white man in a long line of white men who have wanted to be president, and white men are not fashionable this season. Nobody's perfect, but fine distinctions are important. Voter, know thyself.