The Left's Dumb and Dumber Wars 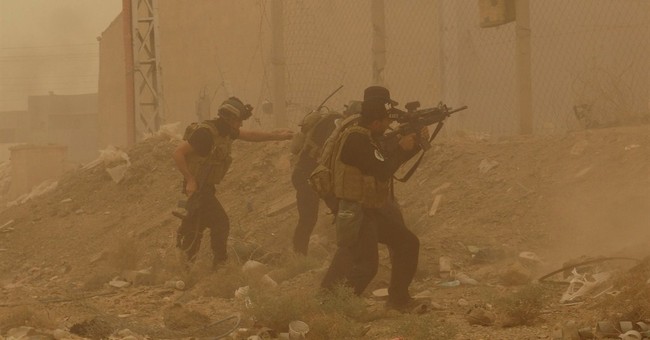 Reports coming out of Ramadi, Iraq and Palmyra, Syria convey hundreds of dead and burned bodies littering streets and thousands of people displaced and on the run. Loss after loss, setback after setback, the White House remains resolved: The president's Islamic State [ISIS] strategy is an "overall success," said White House spokesman Josh Earnest on May 19.

A success for the ISIS, maybe.

Lest we forget, less than a decade ago, nearly 1,300 Americans died fighting in Ramadi. Soon after, the U.S. returned control of that city, which had become one of Iraq's safest, to Iraqi forces. A few days ago, ISIS ransacked and overtook Ramadi, and gained control of U.S. provided tanks, artillery and weaponry. National Security Advisor Susan Rice, the same woman who blamed Benghazi on a second-rate video and claimed Sgt. Bowe Bergdahl served "with honor and distinction," told a group of war veterans the administration had "ended two wars responsibly."

I suppose the devil is in the details, but the last I checked, "responsibly" means sensibly, dutifully and conscientiously. That the Obama administration pulled out of Iraq prematurely and failed to secure a basic status of forces agreement is better defined as irresponsible...reckless...JV squad-ish.

Obama called Iraq a "dumb" war in 2002. It mattered not there was verifiable evidence that Saddam Hussein used weapons of mass destruction on an estimated 100,000 people, sheltered terrorists, refused to let U.N. inspectors in and attempted to assassinate George H.W. Bush. For a short time back in 2011 when victory was certain, Obama's opinion evolved because it made him look good. Evolving is second nature to those without core values. Praising a group of Fort Bragg, N.C. soldiers for the sacrifices they made, Obama told them fighting in Iraq was "right" and "part of what makes us special as Americans."

That was then. Now that Iraq's in shambles, it's time to blame it on Bush again or throw in a few distractions. After all, Obama had no choice but to pull out troops. Not true! On June 16, 2014, National Review's Patrick Brennan spelled out what really went down during negotiations with Iraq. Although U.S. military leadership requested more troops, Obama wanted a minimal military presence of just 2-3,000 "so it [the administration] could say it had ended the war." And despite what Prime Minister Maliki said in public, "it's well-established that behind closed doors, he was interested in a substantial U.S. presence," wrote Brennan. Last year, Marine Corps top leader (now retired) Gen. James Amos courageously spoke out saying, "I have a hard time believing that had we been there [Iraq], and worked with the government... I don't think we'd be in the same shape we're in today."

Face it, Obama does what Obama wants. From day one, Iraq was lost because he thought it was dumb. Everyone heard it...ISIS heard it, and the next thing we know, the world's on fire. Military leaders of all ranks are speaking out saying there is no strategy against ISIS. Even former Secretary of Defense Robert Gates came out saying, "We're basically sort of playing this day to day." Well, that's encouraging.

With chaos abounding domestically and abroad, Obama did what any reasonably minded commander in chief would do and gave a speech about climate change to Coast Guard Academy graduates telling them "climate change constitutes a serious threat to global security" that "will impact how our military defends our country." "Denying it or refusing to deal with it endangers our national security" and is "a dereliction of duty," said the president who swapped five hard-core terrorists for U.S. Army deserter Bowe Bergdahl.

Obviously unable to identify or deal with the real and present enemy, ISIS, Obama and his faithful followers create an alternate one, climate change, and declare war on it. Now that's dumb.