Time to be Thankful in a Difficult World

Susan Carleson
|
Posted: Nov 22, 2018 12:01 AM
Share   Tweet
The opinions expressed by columnists are their own and do not necessarily represent the views of Townhall.com. 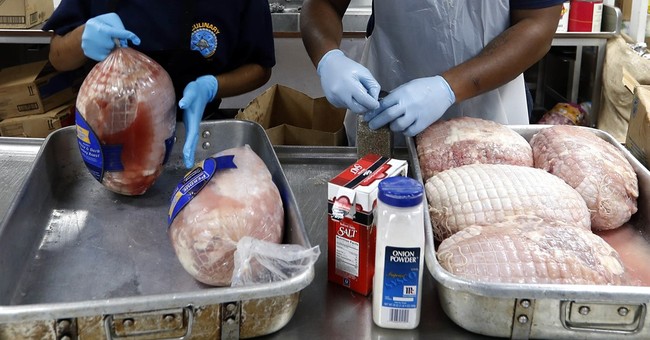 Thanksgiving is a special holiday. It does not celebrate who we are or what we have done. It does not exalt any person, group, or even country. Only indirectly does it remember America’s history.

Instead, it urges us to look outside ourselves and see what others—whether as individuals, through families, or as fellow citizens—have done for us. Indeed, the holiday goes even deeper. It challenges us to look beyond humanity to our creator. And to what He has given us, including His Son.

Which in turn forces us to look back within ourselves and acknowledge our frailties and failings. Even our greatest success often is dearly bought, including through the sacrifice of others. A belief that God’s Son made that payment ties Christians together through the ages. We truly are not alone, but instead, live in the presence of a “great cloud of witnesses,” wrote the author of the letter to the Hebrews.

It is a humbling vision. But also gratifying, for anyone who understands their own limitations. In “times which try men’s souls,” Thomas Paine’s immortal words remind us we should be thankful for the additional support.

There is much more for which Americans should be grateful. One is a democratic process which allows us to choose our leaders. In that regard we are well blessed. If you live in China or Russia, North Korea or Saudi Arabia, or a host of other nations, your “leaders” choose themselves. And those who dissent find themselves in prison—or dead.

We also should appreciate that we live in a republic, not a democracy. Our Founders recognized the danger of unconstrained majoritarian power. So, they made it hard for politicians to act. Our liberal friends regard that as a problem, a malfunction of some sort. To the contrary, separating and limiting power was an overriding objective of the early Americans. And we should thank the Constitution’s framers, centuries later.

The law seems abstract and lifeless to many. But, rule by law rather than men is essential to protect our liberties, and for that we should be most grateful. In contrast to so many other nations, which flaunt lengthy constitutions filled with phony “rights,” the U.S. actually sets law above politics - an important reason we still are free.

We should celebrate those who pay a high price to serve the rest of us. Donald Trump is on the receiving end of a tsunami of extraordinarily vicious attacks, yet he remains determined to do what is necessary to protect this nation from dangers within and without. We all would be at much greater risk if he instead had decided to enjoy a peaceful retirement.

We must also be mindful that almost alone in the world, the foundation of America’s government is an active citizenry. The resulting “little platoons” as identified by Irish Statesman Edmund Burke are the first responders to social problems and political challenges. Nearly two centuries ago the great French liberal Alexis de Tocqueville marveled at the willingness of Americans to act, rather than wait for government. That commitment to serve survives today.

Let us be thankful for our economic freedom. Americans enjoy unprecedented wealth. A poor person today would be more than a king in ancient times. Human liberty, ingenuity, creativity, and determination make the once inconceivable into the now inevitable.

Among those who watch out for us are a parade of heroes. Members of the military who combat enemies of freedom around the world. Activists at home who demand justice for all Americans. Protestors who remember the unborn. Everyone willing to sacrifice for “the least of these brothers and sisters of mine,” as Jesus called them.

For most of us Thanksgiving means a sumptuous meal, family drama, and football on TV. We too easily take this holiday for granted but to fully experience it, we must think about more than ourselves.

These are difficult times. However, we are not alone. Thomas Paine was right to warn us that “the summer soldier and the sunshine patriot” would abandon the fight. Many have left the field over the years. But far more Americans have enlisted, battling for God and country. Americans always respond to the call of duty. We owe gratitude and respect to all those who fight for the rest of us across this great land.

This knowledge should help carry us through trying times. Despite moments of hostility, resistance, turmoil, bitterness, and despair there really is much for which we should be thankful, every day. This Thanksgiving let us celebrate the abundant good in our lives and nation.