Struan Stevenson
|
Posted: Jan 22, 2022 12:01 AM
Share   Tweet
The opinions expressed by columnists are their own and do not necessarily represent the views of Townhall.com. 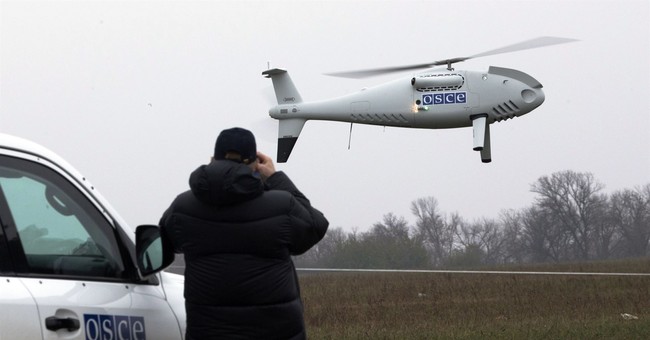 A drone attack on the United Arab Emirates (UAE) last week, which killed three people and injured six others working at an oil storage facility near the airport in Abu Dhabi, led to an immediate retaliation by Saudi Arabia, a close ally of the UAE. The Saudis blamed the Iran-backed Houthi rebels in Yemen for the drone strike and hit back with a heavy air raid on Sanaa, the rebel-held Yemen capital city. The drone attack has simply been the latest in a series of similar raids across the Middle East that all have their origins in Iran.

Despite lurching from crisis to crisis as their economy crumbles, the theocratic regime ruling the Islamic Republic of Iran has invested heavily in military drone production. As a primary tool of the Islamic Revolutionary Guards Corps’ extra-territorial Quds Force, drones have now assumed a key role in the mullahs’ aggressive expansionist policy of terrorist attacks and proxy wars in the Middle East.The regime is spending billions of dollars on its missiles and UAV programs while 80 percent of the Iranian people live under the poverty line and the budgets for health care, education and other national essentials are massively below military expenditures. The mullahs’ neglect of the population during the coronavirus pandemic has led to a death toll approaching almost 500,000 to date. In repeated protests and uprisings, crowds can be heard chanting “No to Gaza, no to Lebanon, my life only for Iran,” and “Leave Syria, think about us instead.”

Resistance units of the People’s Mojahedin of Iran/Mojahedin-eKhalq (PMOI/MEK)have supplied extensive intelligence to the West, identifying a wave of drone production sites in Iran and showing how the unmanned aerial vehicles (UAV’s) have been increasingly deployed as integral parts of terrorist operations and used for supplying proxies in the zone. For years the mullahs have funded and sent military support to Bashar al-Assad in Syria, the Houthi rebels in Yemen, Hezbollah in Lebanon, Hamas in Gaza, and the Shi’ite militias known as the popular mobilization forces (PMF) in Iraq. The increased use of drones is thought to be a cover for the progressively ramshackle Iranian air force.

According to intelligence reports, the engines, electronic parts and other components for the manufacture of the drones, are being smuggled into Iran from countries such as China, Turkey and South Korea,often in breach of tough “maximum pressure’ sanctions originally introduced by the Trump administration. Eight industrial complexes identified in Iran, are responsible for manufacturing the UAVs, with factories operating under the “Aviation Industries Organization”of the Ministry of Defense, including Quds Air Industries, Iran Aircraft Manufacturing (HESA), Fajr Industries, and Basir Industries.

Intelligence reports from inside the theocratic regime also indicate that mercenaries and militants from the many terrorist organizations supported by the mullahs, are brought to Iran for advanced UAV training by the Quds Force, including on the use of missiles and sabotage operations. Pre-assembled drones are then despatched to target countries through the IRGC’s base at Mehrabad International Airport in Tehran, or sent clandestinely by truck to Syria, Iraq, Lebanon and Palestine, hidden in containers, or sometimes by sea to Yemen and other areas.Key parts and components of the drones are also sent to countries like Syria, where they are assembled by IRGC personnel in their Syrian workshops and factories. Bashar al-Assad’s regime has used Iranian drones to identify and attack Syrian opposition forces throughout the bloody civil war, now entering its eleventh year. Drones have also been extensively deployed in neighboring Iraq to the brutal Shi’ia PMF. In a well-publicized parade in June 2021, the PMF proudly displayed their UAV’s,all of which had been sent from Iran by the IRGC.

Drones have rapidly become a weapon of choice used by Iran-backed terrorists and separatist groups. Shahed and Samad class drones have the advantage that they cannot be detected by the most sophisticated air defense system in both Saudi Arabia and the UAE, namely the Patriot Advanced Capability-3 (PAC-3) air defense system. The radar cross-section of these missiles and other missiles that Houthi terrorists use is so little that it cannot be picked up by any radar system currently available.

The Iranian regime has used drones for targeted attacks on oil tankers in international waters in the Gulf of Oman. On 29th July last year, two drones were launched at the MT Mercer Street, a Liberian-flagged oil tanker with Israeli connections, as it sailed off the coast of Oman. Both drones missed their target and landed in the ocean. However, the following day, July 30th 2021, a drone heavily armed with “military grade” explosives, hit the tanker, blasting a six-foot hole in the ship and killing a Romanian and a British crewman. On July 31st, a team of explosive experts from the US aircraft carrier USS Ronald Reagan which was patrolling the Persian Gulf, boarded the Mercer Street to investigate the attack. They were established from pieces of the drone, including part of a wing and internal components, were identical to other Iranian UAV’s that had been examined previously. In August last year the foreign ministers of the G7 condemned Iran for the attack, saying “all available evidence clearly points to Iran.”

Such aggressive behavior should act as a warning to negotiators in Vienna, who are desperately trying to kick-start the defunct nuclear deal with Iran. Far from securing a peaceable outcome, removing sanctions, as the mullahs are demanding, will simply boost the regime’s spending on more sophisticated weapons and on its export and active participation in conflict and terrorism in the Middle East and worldwide. The West must demand a stop to all nuclear, drone and missile production in Iran and an end to the Iranian regime’s involvement in proxy wars and terror attacks. Tougher sanctions should be imposed until such conditions are met.