Steve Sherman
|
Posted: Jul 25, 2020 12:01 AM
Share   Tweet
The opinions expressed by columnists are their own and do not necessarily represent the views of Townhall.com. 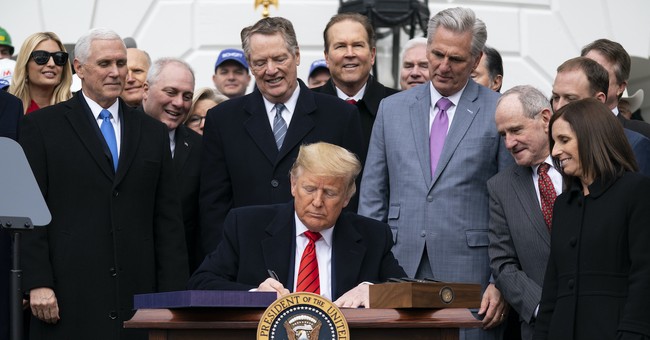 President Donald J. Trump has renegotiated many trade agreements that did not serve the purpose of creating American jobs and expanding the U.S. economy. The high profile, North American Free Trade Agreement (NAFTA), was renegotiated into the U.S.-Mexico-Canada Agreement (USMCA) that was approved by Congress on July 1, 2020. That agreement provided better terms for U.S. job creation and manufacturing.

The list of Trump victories on trade is long. President Trump has been engaged in a long war to fight the unfair trade policies of China and he has fought fire with fire by implementing tariffs that lead to a phase one trade deal. China had been stealing intellectual property from American companies, counterfeiting and blocking American business access to Chinese markets. In a lesser recognized deal, President Trump announced a deal to increase agriculture trade with Japan. The President also renegotiated a deal with South Korea that helped increase production in American’s car industry. Those are all examples of the President negotiating better deals for the American consume and worker.

Now the President should focus on a lesser known, yet harmful deal, the Columbia River Treaty. According to the State Department, “signed in 1961, the Columbia River Treaty calls for two ‘entities’ to be designated to implement arrangements under the Treaty — a U.S. Entity and a Canadian Entity.” This agreement covers the Columbia River’s drainage basin that “includes parts of Washington, Oregon, Idaho, Montana, Utah, Wyoming, and British Columbia.” A problem has been created because of the hydropower provisions in the treaty. The “Treaty’s hydropower operations and management of flood risk provide substantial benefits to millions of people on both sides of the border,” yet more of the benefits are on the Canadian side.

The U.S. and Canada have been renegotiating to modernize the treaty since May 2018. The treaty has some serious problems that make it harmful to U.S. interests because of the energy provisions. This is an outdated and flawed energy agreement that siphons hundreds of millions of dollars worth of energy from America, costing hardworking Americans money. The hydroelectricity being given to Canada could be used here to create jobs and grow the U.S. economy. Bureaucrats in Washington have been slow to renegotiate a new deal and they are not expected to fix it as bureaucracy and environmental politics are already getting in the way. Only President Trump, through unilateral action, can terminate the deal and protect American interests.

President Trump can fix the mistakes of the past by terminating this deal to renegotiate a better one, like he did with NAFTA. Under the treaty, the President can issue a notice of termination that will start a process to renegotiate a new deal or no deal in ten years. This is an example of where President Trump can outflank the Obama-Biden Administration to take action that will save jobs and strengthen America’s energy infrastructure. With the Green New Deal lurking this deal will get wrapped up in politics if it is not renegotiated this year.

The problem with this deal is that it is lopsided and benefits Canada far more that the U.S. This deal is outdated and is estimated to benefit Canada by a 6 to 1 margin. Under the deal, the U.S. has made $8.8 billion in payments for the construction and operation of Canadian dams, yet the true projected cost of these projects was only $2 billion. The crazy part of the deal is that we give the energy produced to Canada, then they sell it back to us. Northwestern U.S. energy users overpay for electricity because of this deal by millions. This deal is unfair and needs to be terminated.

Going into the fall elections, President Trump can help a large swath of voter living in the Northwest of the United States to cut them a better energy deal by scrapping the Columbia River Treaty. Taking that action would be an America First energy policy that the voters will reward. It is important to clean up all the international agreements, big and small, that hurt American consumers and are tilted towards other national interests.

President Donald Trump should scrap the Columbia River Treaty to protect American energy consumers and to set a precedent that all poorly negotiated treaties will be tossed aside to provide an opportunity to cut better deals that actually benefit Americans.