Steve Sherman
|
Posted: Apr 05, 2016 1:41 PM
Share   Tweet
The opinions expressed by columnists are their own and do not necessarily represent the views of Townhall.com. 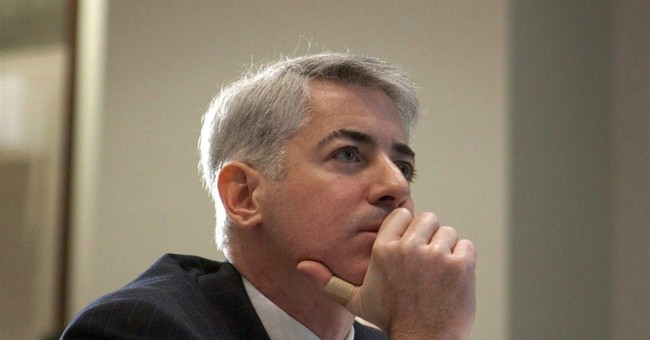 Last fall, I wrote a piece about Hedge Fund Billionaire Bill Ackman and his unmitigated assault on the health products company Herbalife; Battle of The Hedge Fund Titans. It was an interesting piece about one man’s personal vendetta and attempt to take down a famously successful American company.

The short of it (no pun intended), is that Bill Ackman used his hedge fund company, Pershing Square, to take a $1 Billion short position in Herbalife. Thus, banking on the failure of the company to profit immensely, while actually attempting to trigger that failure. Herbalife fought back and the demise of Herbalife didn’t go as Ackman had hoped. Government cronyism and market manipulation are old friends of Mr. Ackman, perhaps for him, they are just part of doing business. All is fair in love, war, and gaming the markets, I guess.

During his war on Herbalife, Ackman has feigned a type self-righteous indignation. As if by taking down a multi-level marketing behemoth he was somehow serving an altruistic purpose. Sadly, the real reason for his attempting to use market games and back room deals to abuse government power and crush a job and product-producing company is much more sinister and simple. The real reason to try to tank Herbalife, is pure unadulterated greed. Literally, billions of dollars are at stake for Mr. Ackman in his war on the health products giant.

It turns out that Mr. Ackman may have to put the Herbalife war on hold as another of his business strategies is facing dark accusations and under perilous times. Enter a company called Valeant Pharmaceutical’s. Valeant took a more than 60% tumble in March, enough to cause Ackman to need a valium! This horrible performance added another 7% loss to round out a disastrous 25% first quarter loss for Pershing Square.

Hey, in business, you win some, you lose some. A bad quarter won’t break a company like Pershing Square, but when things are going bad, sometimes they really go bad. And it’s not always a function of the markets. Sometimes, it’s systemic from the CEO on down.

To add insult to injury, Ackman and Pershing Square are also being questioned by a Senate Special Committee in relation to unethical drug pricing found at Valeant. It seems the government would like an explanation about some seriously inflated prices on some non-patented drugs that Valeant and Pershing Square control. US lawmakers are watching for more poor behavior as witnessed by the obnoxious wonder boy

A probe like this could lead to fraud charges for Mr. Ackman. The Ides of March can sting and sometimes they leave you bloody on the floor. Et tu Brute!

It could also be a case of, what comes around goes around. If you engage in unscrupulous behavior, you’ll get away with it for a time, but not forever. The irony is thick. Ackman put together a $1 Billion short in Herbalife, while calling them a “Pyramid Scheme”. Now Ackman himself may be guilty of insider trading while scheming to abuse sick people line his pockets.

Ackman has stated that Valeant’s problem is “insufficient public relations, not fraud”. I’m sure that Senate Special Committee will take a good look at what was “insufficient” in this deal. Public relations might not be Bill Ackman’s only problem when they are done.