Trump, Putin, and the Rainbow Jihad -- A Love Triangle 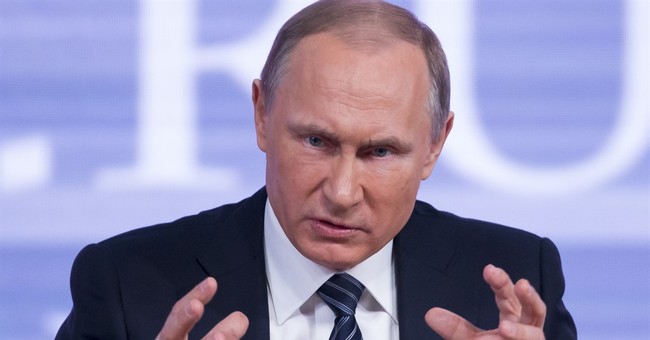 Just when we thought a great bromance was about to bloom between Vladimir Putin and Donald Trump, weird progressive reality had to get in the way.

But first, the love story.

There was Vlad on Thursday, showing a little leg while calling the Donald an “absolute leader” and “outstanding and talented personality.” Then the Donald, clearly blushing, reciprocated Vlad’s advances by saying “It is always a great honor to be so nicely complimented by a man so highly respected within his own country and beyond."

Clearly a pairing of destiny, right? Go get a room, guys. Oh, and Lord Sauron sends his congratulations. So say the literary prophets: Two rings to rule them all, two rings to find them, two rings to bring them all, and in the darkness bind them.

Merry Christmas everybody! Such a dynamic duo of dictatorship will be the gift that keeps on giving throughout the year.

But then came the harlot. Curse you, Log Cabin Republicans.

“(Donald Trump) is one of the best, if not the best, pro-gay Republican candidates to ever run for the presidency,” said the group’s president, Gregory T. Angelo. As reported by Reuters, Angelo said Trump would not stand in the way of the Rainbow Jihad.

Uh-oh. No one is going to be able to heal this broken heart. It’s probably only a matter of time until the jilted Putin storms off and annexes another part of the Ukraine to work out his hurt feelings.

But all of us should have seen this coming from a mile away. Putin, who governs a country that passed a law in 2013 banning "propaganda of nontraditional sexual relations," never really had a shot with a guy who earlier this year basically said Kim Davis was getting what she deserved.

While some GOP presidential candidates went to Kentucky to support the jailed county clerk for defending marriage and the rule of law, Trump lambasted them for political grandstanding and bottom-lined his thoughts on the matter with the ultimate in progressive mantras: “The Supreme Court ruled on it.”

No way Vlad was going to stick around long-term with a guy who could be that culturally flaccid. Make America great again? I don’t think that means what you think it means, Donald. Dasvidania.

Can’t really blame Vlad, though, for letting his feelings run away on him like he did. Some American polls say 40 percent of GOP voters have done the same by supporting Donald Trump for president. Roughly translated, that means a lot of us have become insecure teenage girls who are dying for the attention of the bad boy in their midst.

Sure, that might feel yuuuuge for a little while. Then you will want more. You will want your life to matter for its uniqueness and not just its convenience, but you will finally come to admit to yourself that Trump was never pro-life to begin with.

You will want your love to be ordered toward God and the protection and rearing of children, but you will finally come to admit to yourself that Trump was never pro-marriage to begin with.

And you will want your faith to be protected by the First Amendment and nurtured – as the Founding Fathers intended – to be the backbone of the Republic’s moral destiny. But you will finally come to admit to yourself that Trump’s religion is self-aggrandizement bordering on chaos.

By recklessly pursuing Trump, you will not get what you need. But you probably will get what you deserve. Perhaps you and Vlad can get together in the Crimea and have a good cry about it.