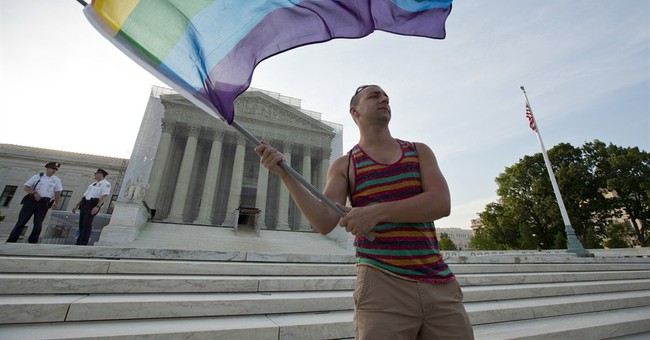 Remember when Corporal Klinger dressed like a woman in the classic television show M*A*S*H because he wanted people to think he was crazy?

Those were clearly the good ol’ days.

Turns out cross dressers and trannies are now elevated to the status of Rosa Parks in our crazy new normal. A Planet Fitness in Michigan gave us our latest example of how far down the rabbit hole goes, when a woman had her gym membership revoked because she complained about a man using the women’s locker room.

Of course, 15 minutes ago such a man would’ve been arrested on site. But “the right side of history” evolves fast, my friends. Best to put down those Bibles and constitutions weighing you down so you can keep up.

So instead of getting the handcuffs put on him, the gender-confused individual was protected by the gym’s “no-judgement” policy. The crucial part of that policy states that a “sincere, self-reported gender identity” will be respected in place of things like, say, sanity. It’s too bad this lunacy wasn’t in place when I was a teenage boy, because I could’ve been quite “sincere” about my gender confusion if it meant an eyeful in the girls’ locker room.

It’s becoming so hard to keep track of which sacred cow is the most super-duper sincere, and thus the trump card in our game of Russian identity roulette. We just got done fighting a fake war on women because one spoiled brat didn’t want to pay for her birth control pills, but now a woman who wants a women’s locker room to be free of creepy naked men gets tossed into the Rainbow Jihad’s leper colony.

If you are keeping score at home, ladies: Getting taxpayers to pay for you to have sex with men who probably won’t respect you in the morning, 1; Feeling safe as you undress or shower, 0.

Yvette Cormier, the gal who needs to find a new health club, must wonder what planet she’s living on. A rape is supposed to be happening around every corner on college campuses, and I’m told awful men keep taking 23 cents away from hard working girls, but a dude puts on some lipstick and stockings and voila!

Look everybody, it’s Jesus-in-drag come to save us from our bigoted selves. Just shut up gals if he decides to disrobe in front of you, because it ain’t patriarchy if the patriarch thinks he’s a chick. And if he thinks he’s a chick, you must acquit.

Reminds me of the countless times the LGBT folks told us that somebody’s gay marriage wasn’t going to affect anybody else’s life, so just be Aaron Rodgers and R-E-L-A-X. Well, seems like what they actually meant was that everybody’s life is going to be affected, and you will be made to care.

Cake bakers? Check. Florists? Check. If those businesses don’t want to be part of a homosexual “marriage,” it’s time for them to shut their doors. Have to serve everybody, right?

Nah. It’s actually the other way around at Planet Fitness, where fitting in requires full support of the freak show or you are sent home. Hypocritical? You bet, but they don’t care. They’ll just blame it on the crusades.

Scoreboard, you squares. Don’t need to be consistent if everyone throws up the white flag so easily when the tolerance bullies come to town. Just need to like watching the world burn.

Take, for example, what’s going on in San Francisco right now. The Catholic archbishop of that diocese is under assault from local civil authorities, and his very own flock, because he’s – gasp! – Catholic! See, he still believes Catholic school teachers need to be faithful to the teachings of the Catholic Church, in both what they teach and how they live.

Hey, not everybody can have a code as cool and hip as “No-judgement,” but they’re a 2,000-year-old institution and they’ve got some apostolic street credit and everything, so not too shabby. But that’s not good enough for the Rainbow Jihad.

Catholic students and teachers with ashes on their forehead, which on Ash Wednesday marks their status as sinners in need of a savior, nonetheless exclaimed that they are smarter than God when it comes to who gets to have sex with whom. Instead of defending their bishop from the attacks of secular officials who enjoy treating the church like a piñata, they jumped right in and asked for their turn with the stick. Apparently they’re also smarter than Christ, because if we’re allowed to just redefine right from wrong ourselves than he’s a fool that died for nothing.

So in summary, dude who dresses up like a girl is anointed as a secular Messiah. Bishop who reminds people that they are designed in the image and likeness of the real Messiah gets crucified.

Because, tolerance, acceptance, inclusion, and diversity.

Those are words the Rainbow Jihad has used to play us like a fiddle for several decades now, but there is another word that has been these bullies’ true bottom line all along—power.

And now that they have it, no one is safe if you attempt to interrupt while they’re shaking their fists at God. Not even a woman changing in the women’s locker-room.