In Praise of the Republican Party Establishment 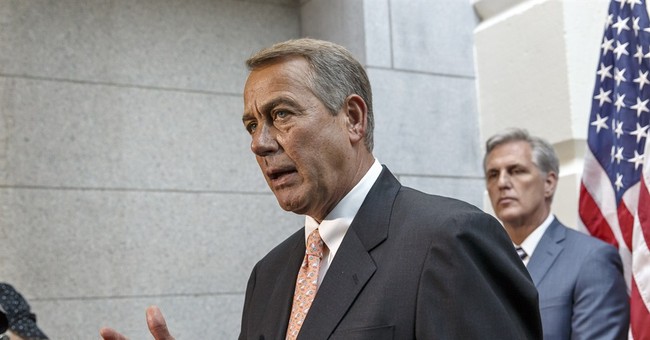 Friends, Americans, patriots -- lend me your ears. For once I come not to bury the Republican Party Establishment but to praise it.

That's right, it is I, a man who has been excommunicated so many times by the GOP establishment I've lost count, who is now here to tell of their mighty deeds. Just as "only Nixon could go to China," so must the waxing poetic of the GOP's "heroic" exploits come from a malcontent like me.

By now you're wondering "what did you do with the real Steve Deace?" But fear not, my brethren, thou still art the man. And I haven't moved to Colorado yet, either, so I still have my wits about me and I don't have the munchies.

Brothers and sisters, I have always promised to call it as I see it. To "fear God, tell the truth, and (then) make money." That hasn't changed, which is why if we're going to call it as we see it, and tell the truth about the 2014 elections that are less than 100 days away now, we must give credit where credit is due.

Make no mistake, with their combined fecklessness, gutlessness, and unwillingness to even pretend to be a true opposition party, GOP leadership has essentially allowed what amounts to one-party rule in America. Which means there has literally been nothing standing between the American people and the Marxist occupant of the White House. Thus, by hook or by crook, President Obama has gotten everything he's wanted.

Which is exactly why Obama is becoming increasingly unpopular by the day.

He has no "obstructionists" to triangulate off of. Sure, Obama has tried nonetheless, but no one -- and I mean no one -- that doesn't share his love for tanning beds takes Speaker John Boehner seriously as a foil. If your nemesis is best known for weeping on a dime, you really don't have one. I once Googled "John Boehner caves" and over 135,000 results came up.

And Senate Republican Leader Ditch...err...Mitch McConnell? How do I loathe thee, let me count the ways. I once offered my audience $100 if any of them could name for me one bold thing McConnell has done these past two years that merits him becoming Senate Majority Leader in 2015, and "not being Harry Reid" didn't count. My audience gave up, and asked for a Mensa quiz instead because it was easier.

Think about it, never before in human history has a group of "leaders" been so richly rewarded for being so ineffective and disliked. That has to count for something, doesn't it? These guys know how to fail spectacularly. No politicians have fallen upward better than Republicans will this fall.

Think about it. The Republican Party's approval rating is even lower than Obummer's, and with a 7 percent approval rating Congress is the most unpopular thing ever polled by Gallup. Yet here they are, poised to make big gains in November. Because by offering not even token opposition to Obamaism, the American people have gotten the Marxist equivalent of "the full Monty." And we are choking on it.

Obama is in worse shape at this point in the 2014 election cycle than George W. Bush was at this point in 2006, and we all recall how that turned out. It led to the tragic relevance of Nancy Pelosi, who is to brilliance what toe jam is to chocolate.

Perhaps it's poetic justice. After all, Marxist redistributive theory seeks to reward people with things they haven't earned, so it' s only fitting the leadership of the Republican Party be rewarded with political power they haven't earned. All because of the scorn the Marxist Regime in the White House has most definitely earned.

So here's to you GOP establishment -- come November 4th a nation turns its lonely eyes to you.