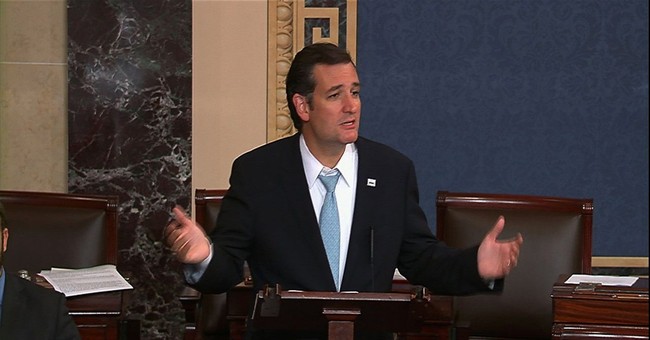 The ruling class is losing its cotton-picking minds, because it’s getting a long-overdue comeuppance from their employers they thought all along were really their subjects.

Whether it’s because of our nixing of their plans for another pointless Middle Eastern war, or our insistence they not foist Obamacare’s epic fail upon us while exempting themselves from it, the resulting ruling class conniption fits are coming fast and furious.

When even a few stand on principle it reveals the character of everyone else around them. And if the Obamacare filibuster begun by Ted Cruz and capably aided and abetted by Mike Lee (with others chipping in) ends up accomplishing nothing else, it has provided a searing spotlight on the character (or lack thereof) of their contemporaries and the system they’re fighting.

Here are 10 things that searing spotlight has revealed:

1. When the best liberals on Twitter can come up with to criticize Cruz’s marathon is the mocking of his reading bedtime stories to his daughters that means he probably won the argument.

2. Watching Dick Durbin volunteer to get annihilated by Cruz answers the age old question “why do bugs willingly impale themselves on our windshields?”

3. Marco Rubio did an excellent job flanking Cruz in the limited time he did so, which only served as a further reminder of all the potential he wasted on scamnesty.

4. All you need to know about John McCain – Democrat Senate Leader Harry Reid took to the floor of the U.S. Senate to ask Ted Cruz for permission for him to speak.

5. All you need to know about Republican Senate “Leader” Ditch McConnell – he was nowhere to be found during the entire event, except to preemptively go after Cruz on the floor of the Senate before it began.

6. Cruz and Lee make a lethal duo, and their personalities complement each other well. Cruz is the courteous firebrand with a memorable quote at the ready. Lee is more deliberate and reserved. If they can maintain that relationship they can wreak holy havoc in the Senate chamber together for the foreseeable future.

7. Things were said that are normally never said in the stodgy and cronyist U.S. Senate, but they were things that summed up the frustration the American people have felt about their government for years and years. Whether it’s Cruz comparing phony symbolic votes to rigged outcomes like in pro wrestling, pointing out just how little many of our employees actually listen to us, or telling Reid he “would not yield to the Majority Leader until the Majority Leader yields to the American people,” Cruz channeled the sort of right-of-center populism against government-run-amok that has resulted in every national electoral victory the Republican Party has had since 1980.

8. In case there was still any doubt, we’ve learned that there is a definite difference between “conservative media” and “Republican media.” Those spewing establishment cop-out propaganda disguised as analysis are way past retirement.

10. Why is the mainstream media hemorrhaging audience share and relevance? It’s not even liberal bias, because plenty of liberals aren’t consuming their product, either. It’s really their unwillingness to see these debates as anything other than personality-driven horse race politics. They’re incapable of taking anything seriously other than themselves. They reduce vitally important controversies impacting every person and family in the country to petty, cliquish schoolhouse battles over who’s on the Homecoming parade float. Frankly, bloggers on both sides of the divide routinely provide more substantive coverage of these debates than the traditional media does.

And here’s a bonus lesson learned. The GOP ruling class that hates him is ironically putting Cruz on a path to the White House.