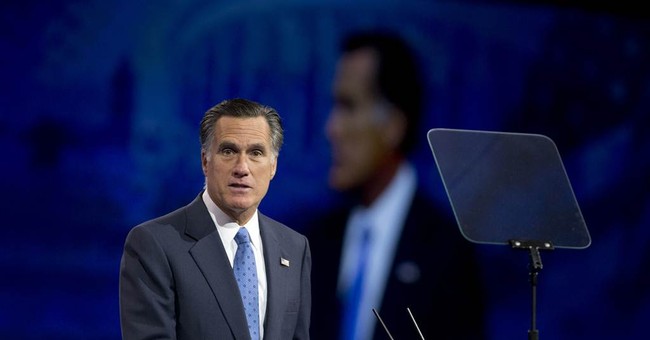 No. No. A thousand times no.

Like a bad rash he keeps coming back. Like Michael Myers or Jason Voorhees in a cheesy ‘80s slasher flick he cannot be stopped. Like the character Milton Waddams in the ‘90s cult classic Office Space he refuses to accept his firing.

He’s as resilient as Rasputin.

By no means am I suggesting we treat Romney the same way. I’m simply suggesting that some people just can’t seem to take a hint. You’d think that after you were rejected despite spending five years and a sizable chunk of your (and others) fortune to win the presidency– not to mention taking every side of each issue – you might come to the conclusion you’re not wanted. Especially given how quickly your base was willing to move on to the future the nanosecond after you lost. But some mosquitoes refuse to be swatted away.

The GOP establishment’s latest master plan that backfired has reemerged to “assert himself as a party elder,” whatever the Sam Hill that means. Normally elders are men of vision, wisdom, consistency, and substance.

Since Romney is none of those things he apparently fits right in as an elder in today’s dazed and confused Republican Party. See, in today’s Republican Party the loser gets the spoils. Jimmy Carter may gallivant around the globe as an international man of mystery, but he’s not been considered a serious player in Democrat Party politics since the embarrassment that was his presidency. Keep in mind that unlike Romney, Carter actually won the White House against an embattled incumbent president. Romney – ironically enough – finished with 47%.

Why anybody would take seriously a man who is only the third person in American history to lose to a president who actually lost support from his previous election is beyond me. It would be like today’s young NFL quarterbacks taking advice on how to win the Super Bowl from Tony Romo instead of Tom Brady.

But there were rising GOP “stars” Chris Christie, Paul Ryan and Rand Paul lining up to be feted at a Romney retreat earlier this summer. But earlier this month there was Romney urging Republicans not to defund Obamacare, which don’t forget was actually Romney’s horrible idea before Obama’s. Instead, Romney urged the Republican Party to “rally around electable candidates.”

You can’t make this stuff up.

Dan Balz of The Washington Post was recently on my show to discuss his new book Collision 2012 about last year’s presidential election. In the book, Balz said the Romney family took a poll about dad running for president in 2012 and Willard himself wasn’t in favor of running. Romney didn’t want to run, but now he just can’t stay away. Romney has now officially flip-flopped on everything.

A man that wants to portray himself as a reluctant warrior has become a zit that won’t pop. And he’s not alone. Whether it’s Bob Dole or John “little ball of hate” McCain, several past GOP nominees have come out of the woodwork to provide their unsolicited un-sage advice on why the GOP has lost the popular vote in 5 of the last 6 presidential elections. And what do Romney, McCain, and Dole have in common?

They’re all losers. They’re all men a majority of the American people rejected when they had the chance to select them as commander-in-chief. So here’s a simple question: if the “advice” these guys are giving is so good then why didn’t they win?