A Profile in Failure: John Boehner 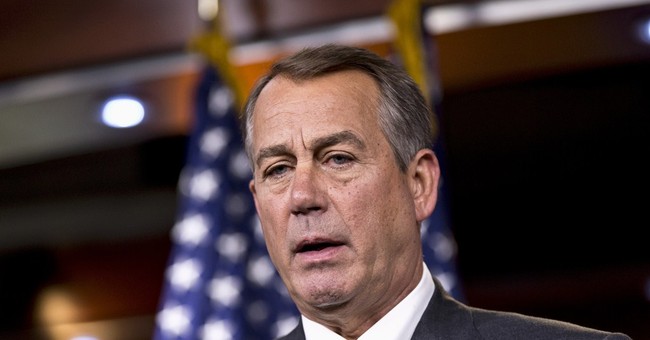 The so-called “Peter Principle” can be summed up in these words: employees tend to rise to the level of their own incompetence.

Ladies and gentlemen, in accordance with those words I present as living proof of their veracity none other than House Speaker John Boehner.

How do we loathe thee? Let us count the ways. On second thought, an itemization of Boehner’s endless string of epic fails would require a novel written by Tolstoy none of us has the time for. So to cut right to the chase, we enter into evidence Boehner in his own words.

On July 21st Boehner unfortunately appeared on CBS’s Face the Nation to again cement his likeness as a symbol for the sad state of leadership within the national Republican Party. When pressed repeatedly by the host if he favors scamnesty, Boehner refused to take a position on the contentious issue that threatens the very essence of our rule of law and cultural cohesion.

Explaining why he wouldn’t take a stand on this or any other issue, Boehner said: “…as difficult as this issue is, me taking a hard position for or against some of these issues will make it harder for us to get a bill.”

Translation: despite the fact I am the leader of the Republican Party in the House of Representatives and second in line to the presidency of these United States, my job is too hard if I actually tell people what I think.

Apparently that’s too nuanced of a position for Government Party Speaker Boehner, who went on to say that his job is to “facilitate this process that involves members on both sides of the aisle, involves the American people and where they can see us moving in a deliberative, step-by-step, commonsense way.”

So apparently there’s no reason to have a Republican majority in Boehner’s mind, since he intends to involve members on both sides of the aisle. You know, just like Harry Reid, Nancy Pelosi, Tom Daschle, Tom Foley, Jim Wright, and Tip O’Neil were known to do when the Democrats are running Congress. Or not.

There are several potential reasons why the Democrats’ congressional leaders are almost always ideologues pushing their party platform, and the Republicans’ are not -- and none of them are good.

Boehner admits he doesn’t see himself as representing a value system or a worldview, but as a consensus-builder. And since he doesn’t think it’s his place to take a position, there is really no standard to determine whether or not whatever that consensus comes up with is good or bad. If Boehner is removing his ideology from the process how does he even know what is a “commonsense way?”

This kind of governing is not the making of a Constitutional Republic, wherein a “government by the consent of the governed” determines what laws to pass or not pass on our behalf based on their Constitutionally-limited authority, as well as the “laws of nature and Nature’s God.” Rather this is the making of a ruling class, where consensus of what’s right for the rest of us is created by an elitist consortium of politicos and special interests -- who of course then exempt themselves from the very decrees they impose upon the rest of us.

Is this really the best the Republican Party has to offer for the third highest office in the land? Don’t answer that.

Then again, Boehner is so inept he’s also hurting President Obama, whose approval ratings are tanking less than nine months after winning re-election. You certainly can’t credit Boehner and the Republican Party leadership for taking the fight to Obama, because they’re barely a speed-bump for statists. Obama is tanking because his own failures are on full display before an American people suffering as a result.

Obama is at his best politically when he’s passing the buck, playing the victim, and/or dividing us based on class, gender, and race. But since there is essentially no organized national opposition party to Obama at the moment thanks to “leaders” like Boehner, Obama has no one to blame. He’s totally on his own now without excuse.

I’d like to think that has been Boehner’s master plan all along. But while I have enough faith to believe Jesus Christ rose from the dead, even my faith has its limits.