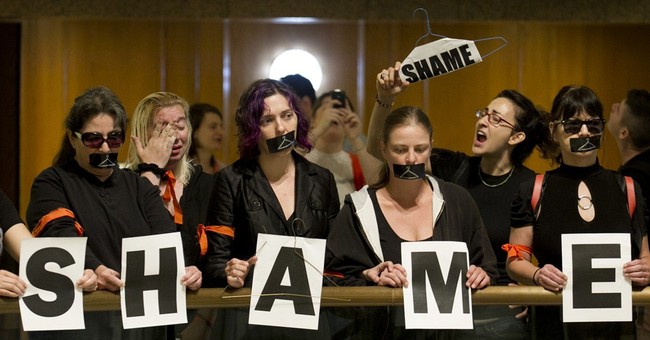 An article in Time Magazine does about the best and most honest job of covering the current divide within the pro-life movement I have seen yet.

The schism comes down to two questions:

1) Is all life sacred and worthy of protection?

2) What is the strategy to ultimately end the tragedy of child killing in America?

The fact that on the 40th anniversary year of Roe v. Wade we still aren’t of one mind on the two most important questions of our movement is exactly why the killing continues.

Time points that there are some claiming to be pro-life that either don’t believe all life is sacred and worthy of protection, and/or have no strategy to ultimately end the slaughter of over 50 million children in America the past 40 years.

At the heart of the debate is an emerging group within the pro-life movement called Personhood USA, whom I partnered with to put forth a pledge signed by almost every 2012 Republican presidential candidate. Despite the massive influence and size of the pro-life voting bloc within the Republican Party for decades, our pledge was sadly the first to demand potential Republican Party standard-bearers to uphold the standard that makes us pro-lifers.

The “personhood movement” actually has a plan to end child killing in America once and for all. In fact, it’s the only workable plan I know of. That plan is to establish by law that a “person” is a person at the moment of biological beginning under the 5th and 14th Amendments to the U.S. Constitution, which say “no person” shall be “deprived of life, liberty, or property without due process of law.”

Isn’t this what you believe if you’re pro-life?

Personhood USA also believes in the “God-given right to life” and that all persons are “created in the image of God.”

Isn’t this what you believe if you’re pro-life?

To which the attorney advocating child killing before the U.S. Supreme Court responded, “I would have a very difficult case.”

It doesn’t get any more practical than using your enemy’s acknowledged weakness against them.

So by now you’re probably wondering why this is so controversial for some within the pro-life movement? After all, isn’t this what we claim to believe? As someone that has been involved in these debates at a high level, I have never gotten a good answer from my Pro-Life brethren who oppose this.

But don’t just take my word for it. Look at what they told Time.

The legislative director for Wisconsin Right to Life told Time she was “done talking about the Personhood Amendment” currently underway in her state. She went on to say, “This particular measure might sound good from a pro-life perspective, but it’s not going to save one single life.”

So apparently following the very blueprint the Supreme Court gave us to defeat Roe v. Wade in the actual hearing “won’t save a single life?” Establishing by law that a “person” is a person at the moment of biological beginning won’t “save a single life?” I fail to understand that logic. Maybe somebody reading this can educate me?

Is there an explanation for this? I’ve tried to get answers. I even went directly to the head of my NRLC chapter in my home state of Iowa. My pastor served on her board of directors at the time, and even then she couldn’t give me a single good reason why they still have never helped us with establishing personhood in our state legislature. I still have the emails from those conversations. Her lack of good answers is why my pastor no longer serves on the board of Iowa Right to Life.

This lack of push for personhood from some notable sectors of the Pro-Life movement is one of the major reasons why personhood initiatives have failed in several states so far. Of course, abolition of slavery failed several times as well, but ultimately succeeded by never surrendering the moral high ground. Personhood USA hopes to emulate that historical success.

If my fellow Pro-Lifers don’t believe “personhood” is the right strategy to ultimately ending child killing in America, then what is theirs? If the strategy is we just wait for Roe v. Wade to be overturned, don’t we need an offensive initiative to force that question before the court? Isn’t the question of who is or isn’t a person that very offensive initiative?

But while some notable sectors of the Pro-Life movement refuse to sign on, personhood is gaining ground in Washington, D.C. of all places. Time says former Republican vice presidential candidate Paul Ryan has introduced a personhood bill that has 38 co-sponsors in the House of Representatives, and Senator Rand Paul has introduced similar legislation in the U.S. Senate. Potential 2016 GOP presidential candidates Marco Rubio and Scott Walker are also supporters of personhood, according to Time.

Yet despite that momentum, Time says “mainstream anti-abortion groups like Americans United for Life and Susan B. Anthony List have distanced themselves from the personhood movement.”

So instead of defending life at conception without exceptions, what are they doing instead? Get this, Time says they are “adopting the rhetoric of women’s health used by their pro-choice counterparts” so that they can target “the 52% of Americans who think abortion should be legal in some, but not all, cases.”

In other words, according to Time neither Americans United for Life nor Susan B. Anthony List is actively standing for the God-given right to life.

Fellow pro-lifer, did you get into this fight so that killing children would be “legal in some, but not all, cases?” Do you think there is ever a good reason to kill an innocent child? Do you think we should execute children for the crimes of their parents? If you believe all of us are made in the image of God, does that same God ever provide exceptions for the shedding of innocent blood?

The head of Americans United for Life tells Time she doesn’t believe as you do. She says “the pro-life movement is not one size fits all. We’re the ones occupying the middle ground.”

It would seem to me asserting the right to life is “one size fits all.” Either you have a right to life or you don’t. It’s not as if only two-thirds (or shall we say three-fifths) of you can be alive and the rest dead.

See, the child killing industry understands there is no middle ground. You’re either for killing children or you’re not. This is why they fight so vehemently against even common-sense restrictions to prevent more Kermit Gosnells. They understand the antidote to the plague on our land they represent is establishing the personhood of every American—from the moment of biological beginning without exceptions.

“The bottom line is that (Personhood USA) is trying to end all abortion once and for all,” the litigation director for the Center of Reproductive Rights told Time.

She’s exactly right. That is what we’re trying to do. Fellow Pro-Lifer, isn’t that what you want to do? Don’t you want to end child killing once and for all? Are you giving your time, talent, and treasure to a group that shares your conviction?