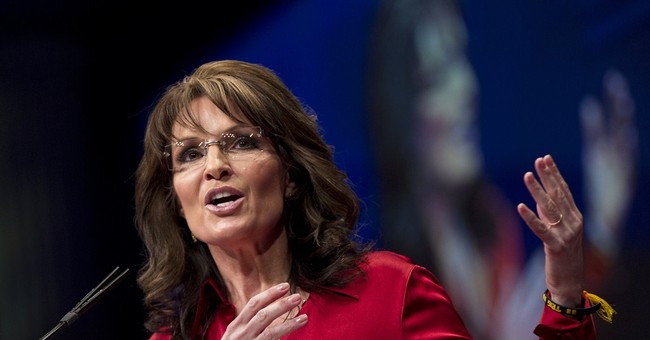 Ronald Reagan once famously said “I didn’t leave the Democrat Party, the Democrat Party left me.” These days, millions of conservatives around the country feel the same about a Republican Party seemingly hell-bent on abandoning every principle other than crony capitalism.

I love the name of that party – ‘ Freedom Party.’ And if the GOP continues to back away from the planks in our platform, from the principles that built this party of Lincoln and Reagan, then yeah, more and more of us are going to start saying, ‘You know, what’s wrong with being independent,’ kind of with that libertarian streak that much of us have. In other words, we want government to back off and not infringe upon our rights. I think there will be a lot of us who start saying ‘GOP, if you abandon us, we have nowhere else to go except to become more independent and not enlisted in a one or the other private majority parties that rule in our nation, either a Democrat or a Republican.’ Remember these are private parties, and you know, no one forces us to be enlisted in either party.

Whenever I’m asked about this, and I’m asked about this a lot, I usually say “I’d like to try a second party before thinking about a third one.” Venting frustration is one thing. Acting upon it is entirely another. When we’re frustrated, there are plenty of things we can justify as a response, but many of those things aren’t necessarily prudent. That’s why we have the saying “cooler heads prevailed.” On the other hand, there is certainly a time and place to fashion a whip of cords or grab the jawbone of an ass and give ‘em your best Howard Beale.

Cost -- With the light of liberty barely a flicker, the absolute worst use of time for conservatives would be essentially starting over to form a 3rd Party movement that may take decades to realize. Given how much freedom, liberty, and morality we’ve lost, our constitutional republic probably doesn’t have decades. We need to do as much good as we can, and we need to do it right now.

Benefit -- Loyalty to the Republican Party has done nothing to squelch our slouch towards Gomorrah or statism. We’ve wasted years as it propped up neo-statists and gutless RINOs, with little to nothing to show for it. Instead of wasting more time on the rotting corpse that is the GOP, better to get to work now on what will inevitably take its place. Short-term thinking is what got us here in the first place.

Cost -- Leaving the Republican Party would essentially hand almost every election of consequence to the Democrats for the next several years and render conservatives meaningless in the grand scheme of things. Furthermore, if no longer held accountable by conservatives, you’ll likely see the Republican Party ruling class openly conspire with Democrats to continue to grow government, which means liberty will be lost even quicker. This rash move would take us quicker to irrelevancy.

Benefit -- The Republican Party ruling class is already conspiring with Democrats to grow government, despite our presence. Just this year they passed the largest tax increase in 20 years, for example. At least if we’re no longer covering for these sellouts we can recover some integrity lost by associating with the tarnished GOP brand and perhaps have an honest conversation with the American people about where we’re headed for once. By forming a 3rd Party, we become de facto independents, and instead of being taken for granted we become a crucial swing vote.

Cost -- Sure, there are days when the idea of bolting the GOP sounds great, but it’s just not feasible. The two most viable right-of-center 3rd Parties -- the Libertarian and Constitution Parties -- still don’t have consistent ballot access in all 50 states. Good luck recruiting candidates without ballot access, good luck raising money without candidates, and good luck moving your agenda without money. The reality is the two dominant parties have made this kind of effort almost impossible without an unprecedented fundraising/legal effort to build up to it. I don’t like it. I wish that weren’t the case, but it is what it is.

Benefit -- That was the same argument used against our Founding Fathers when they wanted to declare their independence. If there’s anything American history has taught us, it’s that when we step out on faith and principle, providence handles the rest. One great way to ignite such an effort is to have leaders with charisma, vision, and integrity lead the way in inspiring others to act on the courage of their convictions. Maybe some of those leaders will emerge if we step out on faith. Founding Fathers like George Washington and Thomas Jefferson became the men we know them as today because they rose to the occasion when history needed them.

Cost -- Most of us would agree the party is broken, but let’s not throw the baby out with the bath water here. The brokenness of the party reflects the cultural brokenness of the times in which we live. All private organizations are only as good as the people inhabiting them. Any new organization will eventually just develop the same problems the GOP has now. You can’t expect a political party to have more moral purity than the culture as a whole. Still, reform is necessary. Instead of reinventing the wheel, why not encourage members of the Constitution and Libertarian Parties to infiltrate the GOP? Many local and state Republican Party organizations across the country are in dire need of people. Who says those people can’t be people of principle? Let’s do to the GOP from the bottom-up what the progressives already did to the Democratic Party. There’s no reason we can’t overrun the party’s infrastructure and put our own people in there.

Benefit -- Some libertarians tried this, and look what the party bosses did to them at the rules committee meeting prior to the convention last year. That was Soviet-style politics. Of course you can’t expect a private organization to be more righteous than the culture, but that actually proves my point. We are aligned with people who don’t share our moral value system and have proven they will do things to beat us they would never do to Democrats. And they’ll even use Fox News and other “conservative media” to do it. The time, talent, and treasure wasted on reforming the GOP is like trying to funnel foreign aid for the hungry through a corrupt local warlord. Whatever we send just ends up in his pocket. Let’s face it, this whole debate is moot anyway because the party bosses are in the process of betraying us first. Thus the longer we wait, the harder it will be to do what we’ll eventually have to go ahead and do anyway.

Now that you've had a chance to weigh the pros and cons, it's time for you to decide.