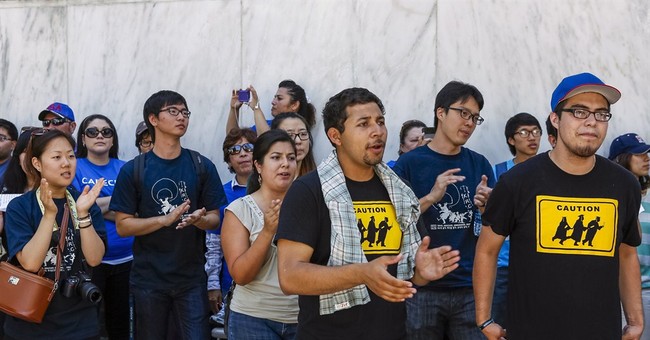 For months now I have written extensively in numerous national publications about the treacherous legislation that is the “scamnesty” bill that will pass out of the U.S. Senate this week. When you have a “gang” writing legislation you get gangster government just like this.

All of the people -- and by all I mean all -- claiming to be conservative who are either still advocating scamnesty or defending those that are fall into one of four categories:

1) Woefully uninformed to the point that they should no longer criticize anyone else for being a low information voter, and should perhaps have to pass a drug test before ever voting on anything other than a chili cook-off ever again.

2) More concerned about preserving their seat at the GOP establishment table than they are the future of our Constitutional Republic.

3) More concerned about preserving Marco Rubio’s flailing presidential ambitions than they are the future of our Constitutional Republic.

4) Traitors to the cause actively looking to undermine the base of patriotic Americans that put them there, so they can stuff the ballot box with more Government-Americans that won’t stand in the way of more gangster government.

This legislation is so bad it’s actually worse than Obamacare and TARP, because it takes the gangster government, anti-Constitutional principles of both and then registers to vote millions more people who will just turn right around and vote for more of the same until the light of liberty is lost for good.

So what should we do instead?

We are in dire need of immigration reform in this country. But this scamnesty will not reform anything, for anything that locks in amnesty before promises of future border enforcement (which have always been broken in the past) are fulfilled will just make the situation worse.

If I were advising the Republican leadership in the House of Representatives this would be what I urge them to do next:

1) Whatever you do, do not pass any comprehensive immigration reform package out of the House of Representatives this year. Not even a good one.

The reason for this is that any House version of comprehensive immigration reform will then be sent to Conference Committee where the details of it will be hashed out alongside the Senate’s scamnesty plan. That means even a good plan out of the House will be polluted with the Senate version, and a little bit of leaven ruins the whole loaf.

Instead of a comprehensive immigration reform package, the GOP-controlled House should instead pass a stand-alone bill that puts teeth on real border enforcement and send it to the Senate to call their bluff prior to the 2014 election cycle. By teeth I mean public Congressional certification within one year that our borders are secure, and that requires a secondary and unanimous assent from all border state governors and state legislatures as well.

We do have demographic reality to confront, and that demographic reality is created by the more affluent and educated having fewer and fewer children as well as erasing over 50 million Americans before they were born. We have corporations running commercials on television begging for more skilled workers. We also have a bevy of labor the American people no longer want, or no longer want to do for the job’s current price point. Given those two realities, there are no good reasons to have 10-20 million illegals living and working in the country while at least 4 million are waiting to immigrate here legally. We need to modernize and streamline our legal immigration system, where waits currently last years if not decades, and we should give preferential treatment to those whose skills are proficient in what our industries need (especially math and science). At a time when our government indoctrination system is producing a generation of Government-Americans believing they’re entitled to other people’s prosperity, an import of those who obey the rule of law and have a skill-set to offer would promote American Exceptionalism.

4) Only after these measures are met should the question of what to do with those already in the country illegally be confronted.

The idea that we have to deal with this right now is a childish premise put forth by gangster government politicians who never want to let a good (phony) crisis go to waste. It’s been six years since we last had this argument in 2007, so if this was really a cataclysmic event, how come it took us six years to have it again?

This has been a problem for decades going back to the Reagan amnesty of 1986, so I doubt setting it aside for a few more years until we adequately put the foundation in place will be the end of the world. Once those real solutions are implemented, then and only then should there be a conversation about what to do with the illegals already here.

I suggest a four-point plan:

1) Instant and irrevocable deportation for all illegals that have committed any additional serious misdemeanors or felonies during their stay other than breaking the law by coming here in the first place.

2) Instant and irrevocable lifetime disqualification of welfare state benefits (including so-called “Dream Acts”) for all illegals except as it directly relates to emergency life-or-death situations.

3) The establishment of a real national guest-worker program complete with e-verify so that folks who are just working here and sending money home can be accounted for and regulated. Furthermore, there should be punitive punishment for corporations caught hiring illegals once this program is implemented.

4) Any current illegals who wish to still become citizens after all these measures are taken, and who can speak English as well as prove they have a skill or trade to offer, are then put into the legal immigration system starting at the back of the line. Of course, given that all their welfare state benefits have evaporated, it’s highly unlikely this number will be nearly as high as it currently is. If they make it through the process and are naturalized they are then barred from ever voting in any election for as long as they live as restitution for breaking the law.

This is a better idea of restitution than having them pay fines that will just confiscate their productivity and make them more a drain on the system. I don’t believe mass deportations are either practical or moral.

I believe this plan is a mixture of both grace and law. There are both consequences for breaking the law and mercy for those whose intent wasn’t malevolent but only to escape the kind of squalor blessedly most Americans can’t even fathom. On the other hand, the rule of law must be upheld, and the productivity and prosperity of the American people must be protected.

I believe this plan does that.