Chasing (the Next) Reagan 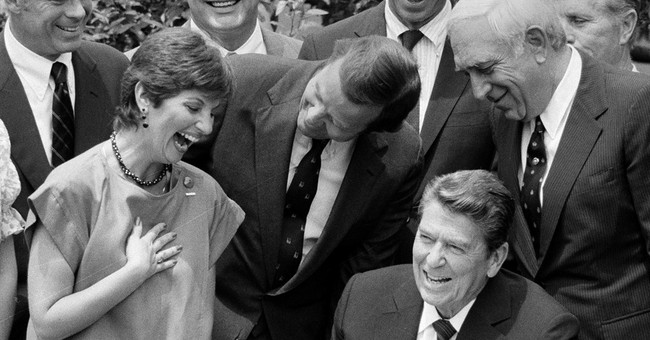 Stop me if you’ve heard this one before.

About a half a dozen Republican presidential candidates run simultaneously, each of them laying claim to being the true “conservative” in the race. On the other hand, just one party establishment candidate runs on no issue other than the myth of electability. With the conservative grassroots split several different ways among multiple candidates, said party establishment candidate goes on to win a series primaries to eventually clinch the nomination.

Obviously I just described the typical Republican presidential primary cycle, but the question that still needs to be answered is why does this keep happening?

To win the future we are mistakenly trying to repeat the past by finding “the next Reagan.” But that is nostalgia talking, and nostalgia is a paralyzing force that makes you a prisoner of the past. Reagan was a man for his time who served God (and the republic) in his generation. But this is no longer Reagan’s time. In fact, it’s far from it. That’s why Reagan couldn’t get nominated today. And neither could George Washington, Abraham Lincoln, or Calvin Coolidge. Our principles may not change but culture does, so the way of communicating and acting on those principles must as well, which requires leaders who understand the times they’re living in and what to do about them. We can’t find another Reagan because we can’t replicate the cultural conditions that gave rise to the Reagan era in the first place, and attempts to do so are like IBM trying to best the iPhone by re-introducing the mainframe computer.

If nostalgia is a paralyzing force, then tradition is an empowering one. Tradition tells us that we should stop chasing after the next Reagan, instead take a stand for the principles and virtues he stood for, and it will be those timeless truths that will produce those that will serve God (and the republic) in their generation. They won’t be “the next Reagan” but rather the ones that will pick up where he left off, just as Reagan did for leaders in the past that stood for the same values in their time and in their way.

However, just because its fools’ gold to try and find “the next Reagan” doesn’t mean we can’t still learn from Reagan.

Ford, Reagan, Bush, Dole, Bush, McCain, and Romney—one of these men is unlike all the others, and it’s Reagan. He sticks out like a sore thumb on a list of ruling class GOP presidential candidates who either surrendered to the statists or were no threat to them. How did Reagan do it? How did Reagan become the last movement conservative to win a Republican presidential primary?

Reagan did it by doing something no one has been able to successfully do since he left the national stage: successfully coalesce the national conservative grassroots into a unifying force capable of defeating the party establishment.

How did Reagan do that? Was it just his charm and charisma? Since we’re human and respond accordingly, those characteristics certainly helped. But charm and charisma alone don’t win Republicans the presidency. That may help the Barack Obamas of the world with the help of the mainstream media acting as a de facto PR firm, but without their substantial help a Republican needs substance. Republicans only win national elections when they’re about issues/ideas, never when they’re about personalities.

I believe Reagan successfully united the conservative grassroots because he represented a comprehensive worldview the entire right-of-center issue spectrum identified with. He was just as comfortable speaking to the National Religious Broadcasters as he was the NRA as he was the National Taxpayers Union. Because he had a comprehensive worldview, Reagan was able to be cited as inspirational to both a Rudy Giuliani Republican and a Jerry Falwell Republican without betraying either. That’s not easy to do. He did that not because he was a flip-flopper or a panderer, but because he could credibly speak about these issues with integrity.

Reagan’s comprehensive worldview gave him the standing to speak to multiple constituencies with moral authority, thus making people with diverse beliefs believe they were part of the same team working towards a common goal.

Since Reagan left the national stage, we haven’t had a candidate for national office (who didn’t have personal baggage) that possessed Reagan’s comprehensive worldview. What we’ve had instead are a host of candidates who have moral authority on some conservative causes but not others, hence we splinter. Often that splintering is on the basis of which of those conservative causes represent our highest priorities. For example, staunch pro-lifers support the most pro-life candidate regardless of where they stand on limited government, limited government advocates support the best small government person regardless of where they stand on social issues, and those concerned about eroding civil liberties support the candidate best on their issues regardless of where they stand on foreign policy. And so on and so on.

Then we spend the primary cycle calling one another names like “pro-life statist,” “RINO,” or “godless libertarian” because we’re angry our fellow grassroots patriots don’t have the same priorities we do, so that must mean they hate America every bit as much as the Left does. I admit I’ve been as guilty of this at times as anybody else has. Meanwhile, the feckless GOP establishment laughs all the way to the nomination (and usually another general election loss).

I believe the only way to stop this vicious cycle of defeat for our movement (and thus doom for American liberty) in 2016 is to find a credible candidate with the comprehensive worldview Reagan had. A candidate who can speak to the March for Life, Freedom Works, National Organization for Marriage, Gun Owners of America, and the Club for Growth with integrity. A candidate that doesn’t make us choose between defending civil liberties and defending the family but is able to do both. A candidate that is able to both speak to the need for sound money and economic growth. A candidate that understands it’s not a choice between scamnesty and a secure border, but that we can’t truly be a welcoming country that is the envy of the world without the rule of law. A candidate that fears the American people more than the American media.

After the past few bloody and divisive primary cycles this kind of candidate may seem too good to be true, but that’s where you and I come in. It’s only 2013. There’s still at least two more years to raise this standard and allow that candidate to emerge. Two years in today’s body politic of perpetual news cycles is an eternity. In two years a Mark Sanford can go from a disgraced former governor to a U.S. Congressman.

Two years is plenty of time to raise this standard and demand excellence from those in demand of our vote. Otherwise it’s wash, rinse, and repeat. Except, of course, this time it won’t just be our movement and the Republican Party circling the drain, but perhaps the last remnants of American liberty as well.