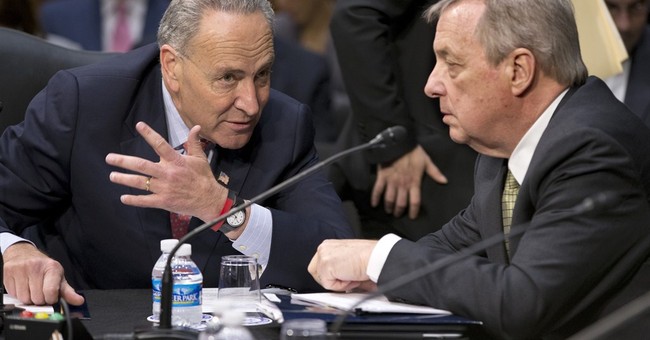 Now joining that infamous group – which includes piles of ignominious anti-constitutional trash like the Alien & Sedition Acts, TARP, and Obamacare – is the Gang of 8’s “Scamnesty”…currently making its way through the United States Senate.

Recently Congressman Steve King said on my nationally-syndicated radio program this Gang of 8 scamnesty is even worse than the original McCain-Kennedy amnesty plan from 2007, and he said it amounts to “the biggest amnesty plan in history.” At a time when we are perpetuating unsustainable debt and growth in government, the Heritage Foundation says this scamnesty plan will cost taxpayers $6.3 trillion, and Robert Rector of the Heritage Foundation told me if anything that’s a low estimate.

But as bad as it is, it’s even more stupid.

Imagine Coke making it easier for people to buy Pepsi. Imagine McDonald’s promoting Burger King. Imagine the Yankees trading their best players to the Red Sox for not even a player to be named later.

If you were an investor in those companies, or a fan of the Yankees, you’d consider those actions treacherous. At the very least they’d be considered self-cannibalization. But in the Republican Party it’s considered strategy.

This of course sounds as stupid as Coke deciding that selling more Pepsi is the best way to improve its own sales. However, we are talking about the Republican Party here, where the smartest guys in the room thought it was a good idea to try to and beat Obama with the guy that came up with his worst idea even before he did.

Coming off another election in which it snatched defeat from the jaws of victory, the GOP masterminds have determined that instead of trying to find out why Mitt Romney did a worse job turning out his base than even John McCain did in 2008, they must target a much smaller Hispanic population that on average has voted Republican only 31% of the time since 1980.

I’ve never ran a national campaign, but I have done simple math. And simple math tells me you should focus your efforts on the group that has more potential voters, especially when in the past it’s proven to be much more willing to vote for you. Romney did not lose because he lost independents. Romney did quite well with independents, which explains why Obama was only the third president in American history to get re-elected by getting fewer popular votes and Electoral College votes than he did in his prior campaign. Romney lost because the GOP is hemorrhaging its base (another example: overall turnout in the 2012 GOP presidential primary was actually lower than it was in 2008). The deterioration of Romney’s base meant he was going to need 72% of the Hispanic vote to win last November.

That’s not happening for any GOP presidential candidate in any universe that doesn’t include unicorns anytime soon.

In trying to make sense of the senseless, I wrote a piece for Breitbart a few months back on the changing demographics in Texas, a state the GOP cannot afford to lose if it still wants to win national elections. In that state Hispanics have accounted for a whopping 65% of the population growth there since 2000. Given those numbers, I concluded this was the one rational reason the GOP leadership wants to do this—the fear of losing Texas and thus losing the country.

However, newly elected (and Hispanic) Texas Senator Ted Cruz opposes the Gang 8 scamnesty, as does Texas Governor Rick Perry. In a recent interview on my radio program, Texas Congressman Steve Stockman made the case the gang of 8 scamnesty will not help but kill Republicans in Texas.

Stockman pointed to California, and what’s happened there since the Reagan amnesty back in 1986 as an omen for Texas should this Gang of 8 scamnesty become law. Stockman noted that from Nixon to Reagan, California was to Republicans what Texas is now. Prior to the Reagan amnesty in ’86, Reagan received 58% of the vote in California in the 1984 presidential election. Since then the GOP hasn’t won California since 1988, and five times the GOP presidential nominee didn’t even get 40% of the popular vote there. Currently only 29% of California voters are registered Republicans.

By themselves Texas and California represent more than one-third the 270 Electoral College votes required to win the presidency. Thus, it goes without saying that turning Texas from red to blue puts every issue that every conservative and libertarian holds dear in serious jeopardy for the foreseeable future.

It’s stunning that Marco Rubio thinks his path to the presidency includes making the path of his opponents much easier. It’s stunning the leaders of the Republican Party define success as repeating perhaps the biggest mistake of its most successful president ever, which Rubio himself once said was wrong.

There are only two explanations for this lunacy. One is mass stupidity. The other is far more unsettling.

For too many years now those running the Republican Party have grown government like Democrats, and have found themselves at odds with their conservative base for doing so. Perhaps the GOP establishment is so tired of arguing with its base it’s decided the best way to win that argument is to just go ahead and register more Democrat voters.