Steve Chapman
|
Posted: May 25, 2017 12:01 AM
Share   Tweet
The opinions expressed by columnists are their own and do not necessarily represent the views of Townhall.com. 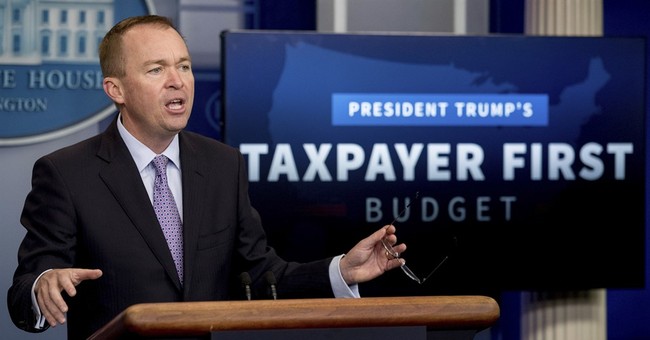 Trending
Donald Trump's first budget proposal is a brazen mix of ideology and dishonesty, seasoned with irresponsibility and pulled out of the oven as soon as it was half-baked. Those qualities make it surprisingly similar to the budgets of Barack Obama and George W. Bush -- and largely in accord with public desires. Its defects are neither new nor accidental.

The plan has been assailed by Democrats and various activist groups for coddling the rich, punishing the poor and shortchanging important functions. Trump proposes to cut outlays for Medicaid, food stamps, Head Start and Social Security disability. Ditto for Environmental Protection Agency enforcement and State Department security. He would close the National Endowment for the Arts, the National Endowment for the Humanities and the Corporation for Public Broadcasting.

This list may give the impression that the president is fiercely determined to tame runaway federal spending. Not so. The portions of the budget that he attacks are those that matter least.

As Brian Riedl of the conservative Manhattan Institute points out, Trump has spared Social Security, Medicare and defense, and he can't control interest on the debt. These outlays make up more than half the federal budget, and under his plan, they would balloon over the next decade. "Advocates of all other budget priorities are left to fight viciously over the rapidly-shrinking scraps," writes Riedl.

Even if he got everything he requests, overall spending would not fall. It would rise. But many of the proposed cuts stand little chance on Capitol Hill. The problem with cutting small programs is that it can produce a lot of bad publicity without saving much money.

Diplomatic security? That would invite "a lot of Benghazis," said Sen. Lindsey Graham, R-S.C. Medicaid? Some dozen Senate Republicans have expressed worry about the impact back home. The NEA? Its grants are disbursed to every single congressional district. And what member of Congress wants to be pilloried for endangering Daniel Tiger?

A lot of these ideas are familiar because they've been raised before and rejected. Former NEA Chairman Dana Gioia notes that Ronald Reagan's budget director wanted to eliminate funding for the agency, but by the time Reagan left office, its budget was bigger than ever.

"Republicans have been trying to strip government subsidies from public broadcasting almost since the inception of the Corporation for Public Broadcasting in 1967," reported Politico in 2010. Yet it's still there, where it is likely to remain.

Cutting expenses is thankless work that carries more political risks than rewards, which is why many of these programs will come through intact. Democrats have no powerful attraction to fiscal austerity. Republicans champion it mostly when there is a Democrat in the White House.

Touching Social Security and Medicare is even more politically explosive, and the payoffs come mostly in the future. For the member of Congress worried about the next election, bringing down entitlement costs in 2035 is not a priority.

Tax cuts hold more allure, because they let lawmakers assume the posture of giving something to voters rather than taking things away. It's possible Trump could work out a tax plan satisfying enough members in both parties to get through Congress.

The catch is that it would leave the government spending far more than it takes in, just as it did under Bush and Obama. But that's not a deal breaker. Few of our leaders care to insist that the public pay for all the government it gets. They would rather go on running big deficits and let posterity figure out how to pay the cost, and the American people are OK with that.

Putting off hard choices indefinitely is the common theme of the Bush, Obama and Trump budgets. That approach has consequences that are debilitating and inescapable, but mostly in the long run.

"We're $20 trillion in debt," lamented White House budget director Mick Mulvaney on Monday. "Every man, woman and child in the country is $60,000 in debt." This is a rationalization for selective spending cuts, though, not for overall fiscal discipline.

The administration claims it will eliminate the deficit within 10 years. Sure it will. And I'm Usain Bolt.

Its projection relies on giddy GDP growth estimates that few credible economists, liberal or conservative, take seriously. The sober, nonpartisan Committee for a Responsible Federal Budget says that under realistic assumptions about the rate of economic growth, "the budget does not get to balance and keeps the unsustainable debt at current levels."

That's worked for our leaders so far. Why would they stop now?