The Surprising Truth About Gun Silencers

Steve Chapman
|
Posted: Jan 15, 2017 12:01 AM
Share   Tweet
The opinions expressed by columnists are their own and do not necessarily represent the views of Townhall.com. 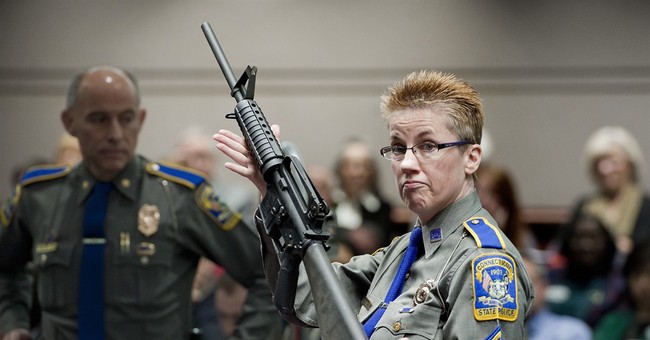 Trending
In "The Godfather," a Mafioso prepping young Michael Corleone to assassinate some rivals gives him a pistol for the job. After firing a bullet into the wall, Michael complains, "Ow! My ears!" His friend says, "Yeah, I left it noisy. That way, it scares any pain-in-the-ass innocent bystanders away."

The Corleones would have had little interest in a bill allowing gun owners to obtain silencers without the federal permits required since 1934. Some people like the deafening boom of a gunshot. Most shooters don't, and the National Rifle Association is pressing for enactment of the Hearing Protection Act, which also has the endorsement of Donald Trump Jr., an avid trophy hunter.

The proposal horrifies gun control advocates, who see it as a favor to homicidal maniacs. The Violence Policy Center in Washington argues that silencers pose a grave danger to public safety because they "enable mass shooters and other murderers to kill a greater number of victims more efficiently."

Some perspective is in order. Right now, getting a federal permit requires a $200 fee, an extensive background check and a wait of several months. Possession of a silencer without a permit is a felony that carries a 10-year prison sentence. Under the proposed change, silencers would be treated like ordinary guns. Criminals would be ineligible, since they can't pass the required federal background check for purchases. Only law-abiding adults would have legal access.

The industry prefers the term "suppressor" because the devices don't eliminate the noise; they merely diminish it. The American Suppressor Association attests, "On average, suppressors reduce the noise of a gunshot by 20-35 decibels, roughly the same sound reduction as earplugs or earmuffs." A shot from a 9 mm pistol equipped with a silencer is about as loud as a thunderclap.

Recreational shooters and hunters would like to have silencers because they don't want to damage their hearing but dislike using ear protection. If the Occupational Safety and Health Administration had been around in the 1930s, gun rights lawyer Stephen Halbrook quipped to The Washington Post, it probably would have mandated their use.

Silencers also reduce the recoil and improve the accuracy of guns. For the average gun owner, there is no downside. There are collateral benefits, too. In rural and unincorporated areas where shooting is allowed, they minimize the disturbance to neighbors and wildlife.

It's not hard to imagine how they could be deployed for bad purposes. Yet there are some 900,000 registered silencers in this country, and they are rarely used in crimes.

Chicago has a lot of bloodshed, including 762 homicides and more than 3,500 shootings last year, but silencers figure in little or any of it. Anthony Guglielmi, a spokesman for the Chicago Police Department, told me, "We seldom recover silencers. Sometimes you may get a gun with a makeshift silencer, but even that is rare."

A report last year by the VPC cites a handful of shootings in which silencers were used. But the paucity of examples confirms that they are not of great interest to criminals. An earlier study by Paul A. Clark published in the Western Criminology Review found only two federal court cases involving the use of a silencer in a murder between 1995 and 2005.

He also unearthed eight cases in which "a silencer was actively used during commission of a crime but not used to physically injure anyone." That works out to one serious silencer-related crime per year, in a country that in 2005 had 16,740 homicides and 417,000 robberies.

Supporters of the status quo say this merely proves the effectiveness of strict regulation. But improvised versions can be fashioned out of flashlights, oil filters or metal conduit. YouTube has numerous videos providing guidance for the do-it-yourselfer.

If silencers were truly valuable to ordinary criminals, there would undoubtedly be a thriving black market and plenty of crimes committed with them. But the federal Bureau of Alcohol, Tobacco, Firearms and Explosives traced only 125 silencers in 2015 -- not all of which were connected to crimes. As Clark notes, a minimally clever miscreant can get the same noise reduction by wrapping his gun in a towel or pillow.

Any useful technology can be put to villainous ends. But the existing rule on silencers is a major hassle for the law-abiding and an irrelevance to criminals.