No Pardon for Edward Snowden

Steve Chapman
|
Posted: Sep 22, 2016 12:01 AM
Share   Tweet
The opinions expressed by columnists are their own and do not necessarily represent the views of Townhall.com. 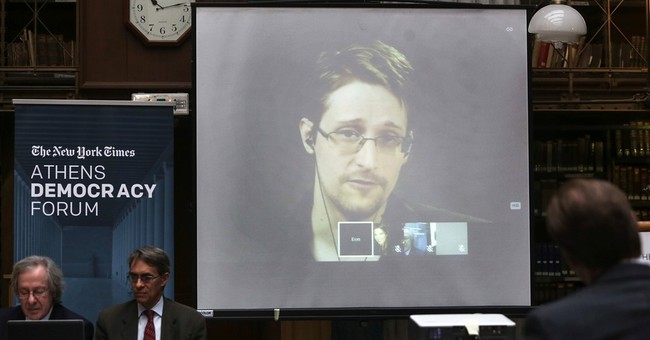 Trending
Edward Snowden did Americans a service. In revealing that the National Security Agency was collecting records of millions of our phone calls every day, he exposed a mass infringement on privacy, generated a valuable national discussion and brought about helpful reforms.

But I can't. That's because there is another vital interest at stake: the lives and safety of Americans. Snowden put them in jeopardy, through disclosures that did not justify the risk. National security is a central responsibility of our government. Many of his revelations undermined that mission.

Snowden's defenders note, correctly, his central role in making public the NSA's domestic metadata program -- which gave the government access to a vast trove of phone records without public knowledge. A commission appointed by President Barack Obama found the program created "potential risks to public trust, personal privacy, and civil liberty" -- and "was not essential to preventing attacks."

What Snowden's allies omit is that most of what he leaked concerned activities that are important in combating terrorism and other dangers -- particularly an NSA program that involves listening to phone conversations and reading email of foreigners located abroad. That operation, the presidential group determined, "has clearly served an important function in helping the United States to uncover and prevent terrorist attacks both in the United States and around the world."

One member of the panel, Geoffrey Stone, is a constitutional law professor, a member of the National Advisory Council of the American Civil Liberties Union and an unabashed liberal. But he opposes a pardon for Snowden because based on what he learned from his service on the review group, he thinks the harm of his actions far exceeds the benefits.

The foreign surveillance "is by far the most important program the U.S. has," Stone told me. Snowden's leaks appreciably impaired its effectiveness by alerting our enemies to exactly how they were being monitored, giving them information useful for escaping detection. By weakening a vital weapon, Snowden's action may cost American lives, if it hasn't already.

Even one of the experts who favor a pardon acknowledged that "Snowden's actions caused great damage to national security." The admission came from Timothy Edgar, who was director of privacy and civil liberties on Obama's national security team and, before that, national security counsel for the ACLU.

Jack Goldsmith, a Harvard law professor who served in the Justice Department under President George W. Bush, wonders why Snowden revealed how the NSA spies on foreign governments, that it worked with Norway and Sweden to spy on Russia, that it was infecting Chinese computers with malware and that it had hacked into the networks of a telecommunications firm linked to the Chinese military.

The House Permanent Select Committee on Intelligence, sent a letter to the president opposing a pardon -- with every Democratic member signing. The committee, which compiled a classified report on the effect of Snowden's leaks, unanimously concluded that most of the documents he took "have nothing to do with programs impacting individual privacy interests -- they instead pertain to military, defense and intelligence programs of great interest to America's adversaries." The United States, it said, will have to "spend billions to attempt to mitigate the damage."

Nor did Snowden's revelations produce all that much change. The telephone records are still being collected and stored and are still accessible to the NSA. The eavesdropping of communications overseas goes on more or less unimpeded. Snowden obviously thought that if Americans knew what their government was doing, they would demand that it stop. They didn't.

The problems with a pardon are twofold. The first is that it would excuse Snowden for the weighty negative repercussions of his choices. The second is that it would encourage other federal employees and contractors with the top-secret security clearance Snowden had -- all 1.4 million of them -- to decide for themselves what should be secret and what should not.

But national security, even in the most open democracy, requires a measure of secrecy. Exposing everything our government does to foil its adversaries makes it easier for those enemies to survive and succeed against us. The American people got something from what Snowden did. Our enemies got more.